Posted on September 11, 2016 by snitchthebudgie

We’ll start our look at the larger scale layouts at the Gaugemaster show, with Allenton in HO.  Just 6′ of shunting layout, with a Timesaver track plan.  Somewhere in deepest Cotton Belt territory, a Southern Pacific switcher is hard at work.

I love this first photograph (though I say it myself) as it brings out the detail in this little layout, and how foreground buildings have been used to frame the locomotive and make the layout seem larger. 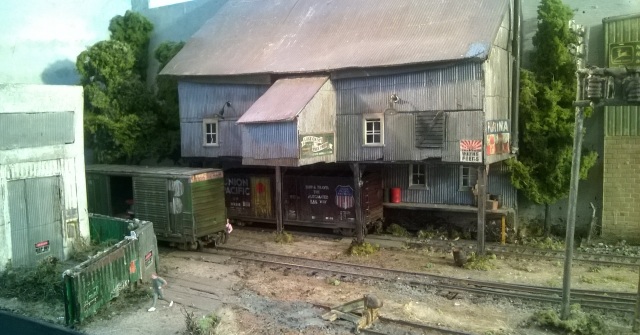 Also in HO was Red Hook Bay, another layout I’ve seen before on the exhibition circuit.  Lots of craftsman kit structures and masses of detail.  It’s an interesting contrast with Allenton.  Both are highly detailed, but Allenton goes for the grimy look, whilst Red Hook Bay has that pristine clean look that real railways never had, but is how we remember them.  Both approaches are completely valid – Rule 1 applies, ‘It’s my railway’. 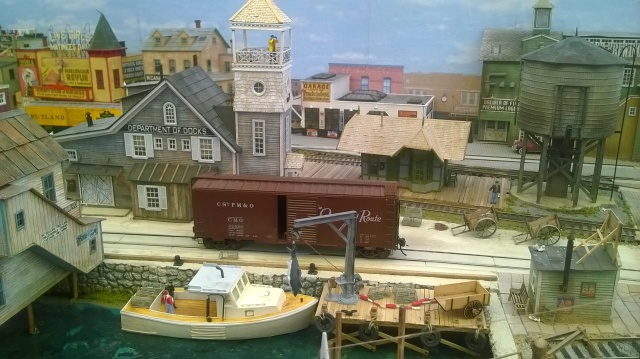 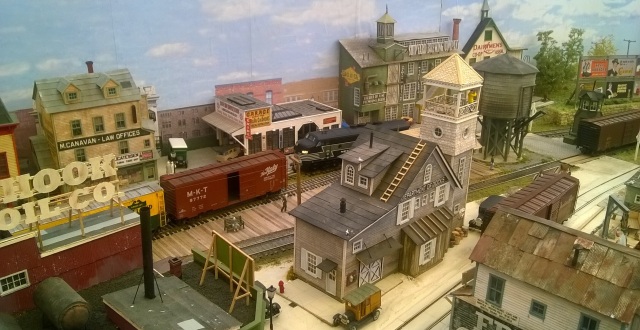 British OO was represented by Nene Wharf, a goods branch set in the Fens of Cambridgeshire.  An attractive switching layout, UK style.  I liked the sense of place, especially helped by the backscene showing the billiard table flat countryside. 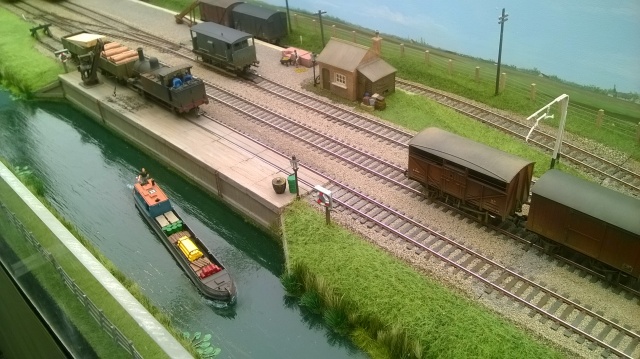 OO was also represented by two small loco shed layouts, the slightly larger Raphingley Road TMD and the minimalistic (but none the worse for that) Jake’s Yard.  Both were excellent little layouts, giving a chance to view the BR blue diesels on sale in the Gaugemaster shop!

Forleigh was also in OO, and included a preserved line and engine shed. 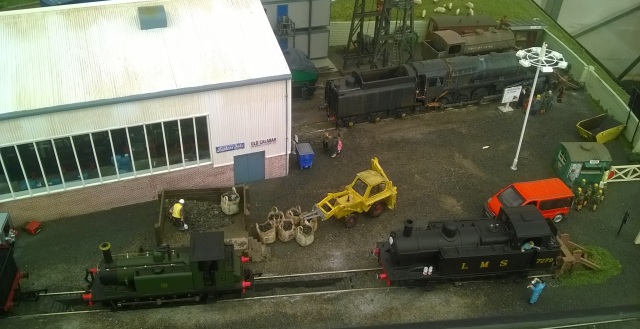 O gauge was represented by Belbroughton, a small branch line layout set in Worcestershire and running LMS and GWR trains.

Finally, G gauge was on show in the form of Hampton End.

There were a number of modelling demonstrations to see, plus a few society stands.  The SCNF Society had an impressive model of a viaduct towering over the seaside and beach.  The subversive ESNG members asked why they hadn’t painted a burkini on one of the bathers, then surrounded them with a riot squad…..

All in all, a very pleasant show with plenty to look at.  I missed the ‘scale’ layouts in EM and P4 or 2mm or Scale7.  But Gaugemaster tend to sell in the commercial gauges, so their own show has layouts where you can buy similar items in the shop next door.

It was a good way to spend the weekend.  And there’s another expedition to look forward to next Sunday – a trip to TINGS, the large N gauge show near Leamington Spa.  I can find all the detail bits and pieces I need (or think I need) there.

2 Responses to ESNG on the road #3