Posted on January 21, 2017 by snitchthebudgie

Last Sunday, Allan, Derek and I paid a visit to the Chiltern Model Railway Exhibition at their new venue in Stevenage.  I saw the list of layouts on display and thought I would really like to go.  So I phoned our pastor on Saturday evening, and asked if I was needed for church on Sunday morning.  I got the reply, “You’re indispensable, but have fun.”  Unfortunately Saturday night, most of his family went down with the lurgi, so neither of us were at church on Sunday.  However, it was such a good show, so no regrets.

There have been a few negative comments around the forums about the show, especially the time it took to get in.  We could see that they were still working out the logistics for using the new building, so no complaints there, and on the Sunday morning, we got in quickly enough.  Once inside, the gangways were nice and wide, so no scrums around layouts, the layouts were excellent, and there was plenty of trade.

My only comments would be that (1) there was a lack of N gauge, though I go to shows to see good modelling, not just N gauge layouts (and I understand that the second N gauge layout had to pull out due to family illness), and (2) as with Bognor the bacon rolls had run out AGAIN.

Three layouts I’ll feature today were probably my favourites, and all on the theme of exchange sidings.  Our American cousins seem to understand the potential of exchange sidings better than we do, perhaps as they were so common as goods stock was moved between different railroads.  But they do offer a lot of shunting in a small space.

First layout was Canada Street in EM, exchange sidings for a dock.  Beautiful modelling thoughout, especially the buildings, as I hope these photographs show.  Looking down the layout, note the detail in the foreground, of a running storm drain, and floating debris.

The dock buildings themselves are superb, especially the signs painted on the brickwork.  These used to be so common – you can still see one from the train on a gable end just outside Redhill station. 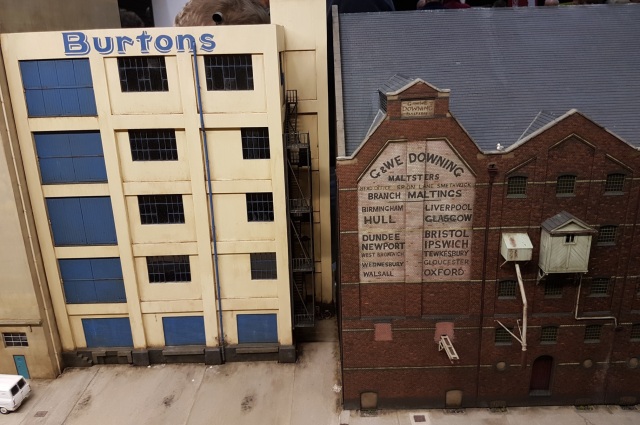 Perhaps my only possible criticism is that I have never seen a white Transit van that clean – perhaps it’s brand new? 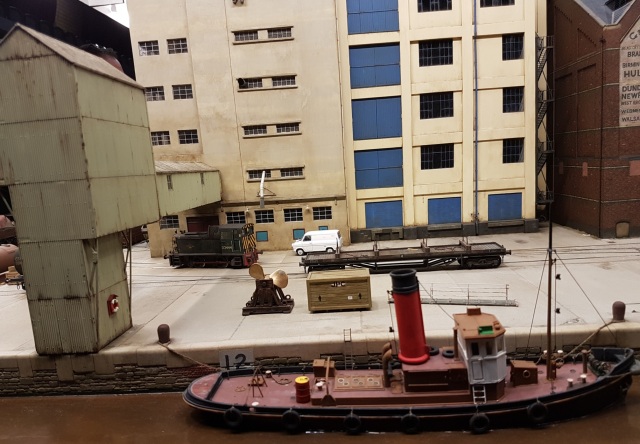 It’s difficult to tell that this building and half-sunk barge is a model.

Moving up to O gauge, Netherdown Sidings represented a set of exchange sidings on the trans-Pennine Woodhead line in its final days.  It featured full overhead catenary and EM2 electric locos (one hiding behind the signal box here.)  It was pleasant just to watch the shunters shuffle wagons around in the yard. 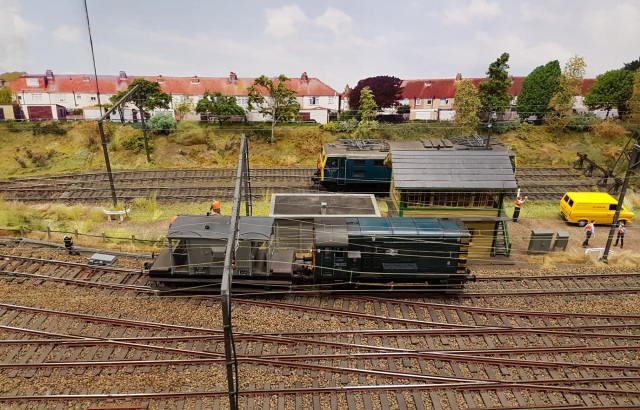 Finally today, there’s Black Country Blues, again in EM.  I saw this layout at Alexandra Palace a couple of years back, and it looks just as good a second time around.  Blue diesels haul a variety of scruffy looking goods stock around at walking pace.  A few tired industrial buildings flank the tracks along with some unhealthy inner city greenery.  The scenery is spacious and uncluttered.  Perhaps the best feature of the layout is the one piece photographic backdrop of Birmingham.  Another top class layout, that just inspires one to do better. 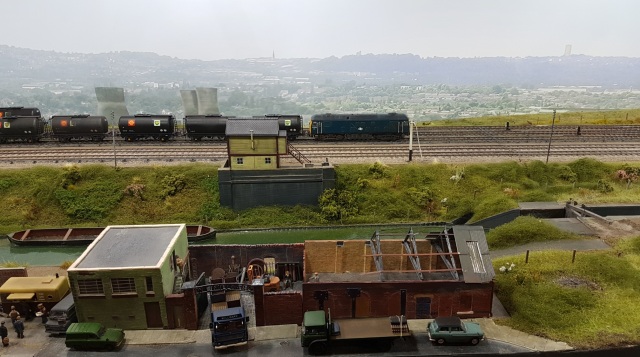