Posted on October 25, 2017 by snitchthebudgie

We start our final day at Farnham with the magnificent Addison Road, in ‘O’.  Modelling to a high degree of accuracy what is now Kensington Olympia station, it’s set in the mid-1920’s so you can see LNWR, GWR and LBSCR trains, plus almost anything from the Big Four railway companies running down the West London line.  It’s also big – 50′ by 5′.  Notable is the LNWR Oerlikon EMU, that operated for many years on the line.

Hospital Gates, in ‘O’ is a light railway built to serve a hospital – in this case the “Whittingfield Hospital Railway” in Lancashire, that lasted till 1957.  The model is set in 1944-5.  Such railways to remote hospitals and asylums were not unusual – the LSWR even carried trains for the London Necropolis Railway, from Waterloo to Brookwood Cemetery.  I’ve yet to see a model of this….. 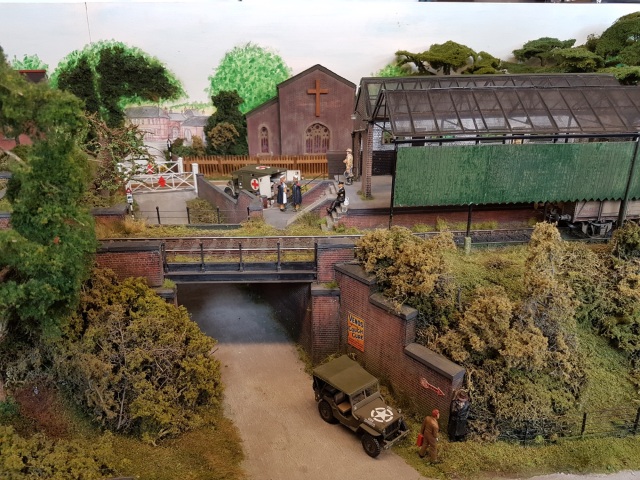 Ynysybwl, in EM, is a small continuous run model that is a faithful replica of the station and it’s surrounding area, on the Taff Vale Railway in 1922.  As one might expect from a railway in the Welsh Valleys, trains usually consist of solidly built tank engines and many mineral wagons.

Frecclesham, in ‘O’ is one of those railways that was (the prototype that is) built more from optimism than sound economics, and struggles on as a remote branch line….

A train arrives in Arigna town (7mm, Irish 5′ 3″ gauge), watched by potential passengers and livestock, whilst work continues in the local garage.  These were the days when you fixed cars with a hammer rather than a computer….

And finally, a quiet moment on Weyden Road (‘O’)….

And so to Uckfield.  There are too many good shows to visit at the moment!

Secretary of the East Surrey N Gauge railway club
View all posts by snitchthebudgie →
This entry was posted in Exhibitions, Inspiration, Layout design, Out and about and tagged 2mm Association, exhibition, model railway, N gauge. Bookmark the permalink.