Posted on January 26, 2020 by snitchthebudgie

I wondered about visiting the Longfield show yesterday, but after a busy day on Friday trotting around Chinatown (and discussing wedding plans with my eldest), inertia set in and the armchair was more attractive.  And whilst I should have written this post in the evening, an old work friend asked us over for a drink, so that was that for the day.

(Malcolm was very restrained and only showed us the best of his holiday snaps from Antarctica – stunning. These included a few of the most southernmost railway in the world, a narrow gauge line in Terra del Fuego and a mind-bending photo showing both sunset and sunrise in the same photo.  When you are that far south, sunrise is two minutes after sunset.)

But back to layouts.  I’ve been thinking about how to model different eras on one layout, and a post on RMWeb got my thoughts going again.  The author was happily running his blue diesel collection on his 1930’s GWR layout.  He commented on the photos, that:

Although the layout’s supposedly set in GWR days, I’m not only content to run it in BR steam days, but also to push the clock forward to the blue diesel era – within a very loose timeframe that allows for hydraulics, pullmans, TOPS-coded diesels and Railfreight-era wagons to sit comfortably (or not) together. Even the odd sectorisation or green diesel may squeak in. …

The local heritage bus operator didn’t get the memo to bring out something more in keeping with the period. The truth is, I can tune out the incongruous scenic elements when running the models but the camera is crueller…

We close this interlude with the arrival of the Western Pullman service – once the future, soon to be the past! I doubt that that cattle dock would still be there by 1973.

Actually, the blue diesels looked fine on the 1930’s layout – just a few things like the bus and cattle dock mentioned above looked out of place.  So how could one approach a layout if you have interests from different eras?

It is certainly true that apart from road transport and fashion, the railways changed little between the mid-30’s and the mid-60’s.  Yes, there were changes, but few that couldn’t be ignored.  The differences become even less if you model the rural railway.  Branch lines tended to age slowly.  And if you are out in the country, there are less buildings and the like to define the year.  Chris Morris’ Little Aller is a great example of this, with only the signal box giving a clue to era.  Chris will run one day of a show with BR steam, then a second day with blue diesels. (Photos from N Gauge Forum.) 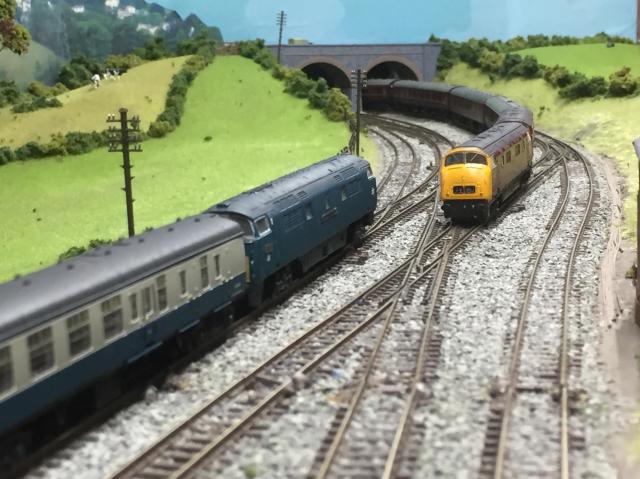 A while back, I looked at Smallbrook Junction in Southern Railway/British Railway Days?

The double track on the left comes from Ryde, and the line divides for Newport and Cowes and the west, and Ventnor and the south.  A simple, but interesting prototype.  There is one complex bit of pointwork, a signal cabin, a hut or two, a road bridge to the north plus a few Southern rail built signals. 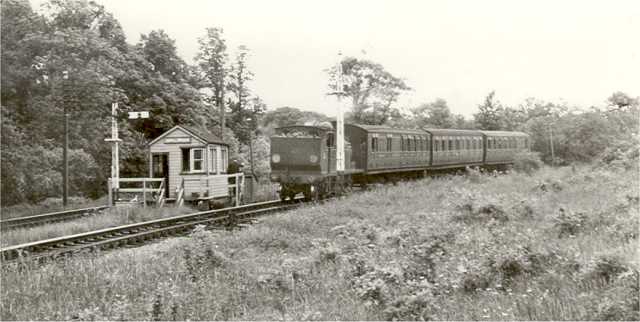 The strength of a layout such as Smallbrook is that it could be (almost) anywhere.  It would be quite convincing to run Southern Region stock from the mainland, transposing the layout somewhere out west.  And if you turned a blind eye to the Southern signals and box, really any train would look OK, from any era from 1910 to 1970.

An urban area model would be more challenging, especially if one wants to run EMU’s.  But remember the LSWR started it’s 3rd rail electric service in 1915.  If one is modelling urban lines in cutting and against retaining walls and house backs, perhaps only the signals giving away the era.  Colour lights became quite widespread in the 1920’s, but changed in character in WW2, when the hoods were added to the lights to enforce the blackout.  And of course, semaphores could be found in parts of the system until recently.

If one modelled a goods yard or loco depot, eras could be even wider – 1910 and 1955 would be possible, apart from the tidiness of the yard.  I’m sure that BR didn’t whitewash the coal stacks any more in 1955.

Perhaps the takeaway from this ramble is that it is quite possible to model two eras on one layout:

Yes, one can model one era to the best of one abilities, but having a second set of stock for a different running session perhaps works better than expected.  After all – even the GWR mecca of Pendon has recently had a diesel running day.  If they can do it, so can anyone else!