Back to the hall on Sunday for our afternoon meeting.  Great to have nine members attending – enough to be busy and sociable, but not too crowded in the hall.  Door and windows were open for ventilation, though we had to close the doors when the heavens opened!  The chairman also had to leave early as he was starting work at 11pm.  If he starts any earlier, he’ll meet himself coming home from work.  Paul commented on Facebook….

Back from an enjoyable afternoon with the East Surrey N Gauge Group. My module worked OK and my trains ran well. Also sold a few of my European wagons to help finance the purchase of some more Shinkansen sets later this year. 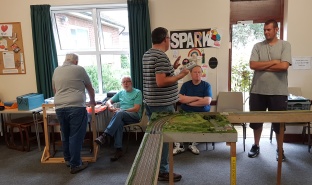 The latest in multiple units, both prototype and model…..

And some European intruders…..

And Brian recorded it all on film….

East Surrey N Gauge Running Day 25th July 2021. Nice to meet more than six members indoors, with the windows and doors open, and another opportunity to film some N gauge train action. All eras, all regions of the world, had trains represented on the tracks – an interesting collection.

But not Antarctica, Brian?