Posted on January 17, 2018 by snitchthebudgie

Time out with Mr Atfield on Saturday, visiting two shows north of the river (Thames).  We started at the Brentwood toy fair.  These things are a real lottery for ‘N’ gauge – it’s OK if you want to buy Hornby or buses, though – but there was a lot on offer today.  I was lured into some Farish van, especially when the trader accepted my optimistic offer.

Then on to Stevenage and the Chiltern Model Railway Exhibition.  We took about 25 minutes to find a parking space, but once inside there was plenty to look at.  We’ll start, as ever, with the small scale stuff, and a second post will have a few other things that caught my eye.  Not much detail – just photos – as I didn’t buy a show guide.

Law Junction was, I believe, from a Scottish club, and showed a stretch of 4 track electrified main line.  Tidy modelling, and conveyed the wide open spaces with trains in the landscape. 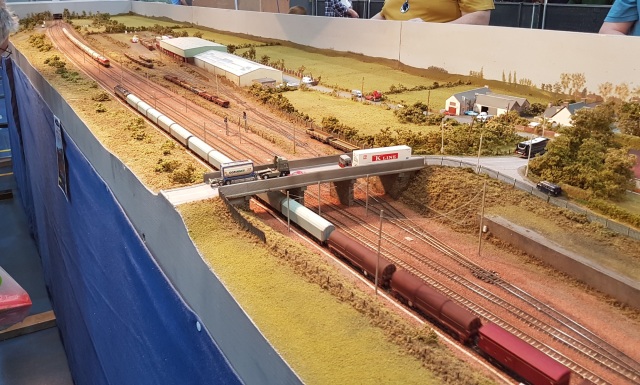 The Bridge at Remagen was meant to be at last year’s show, but had to drop out.  Most interesting modelling of WW2 railways, with loads of German military trains and other hardware.  I see that I missed a picture of the actual bridge.  This was certainly one of the highlights of the show…. 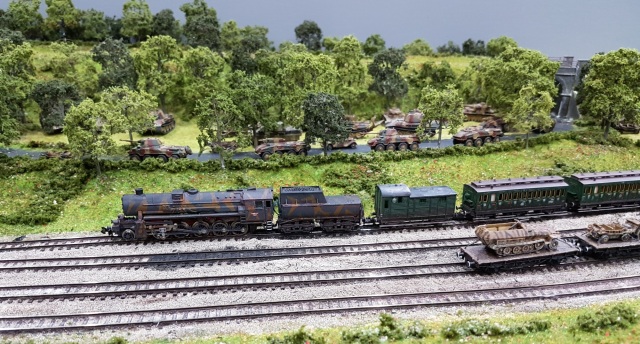 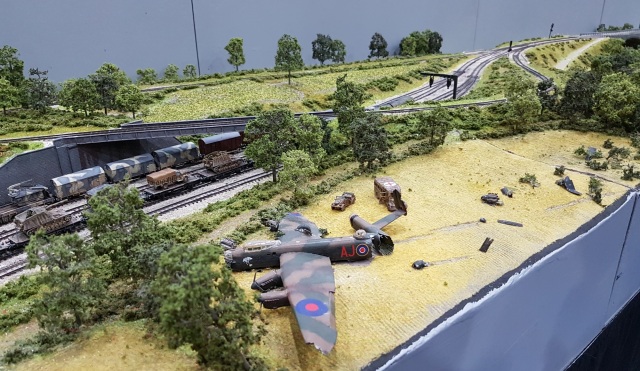 Next the 2mm finescale, Great Western department.  Both photos taken from the end of the layout, when the improved appearance of finescale is most obvious.  First Llangerisech…. 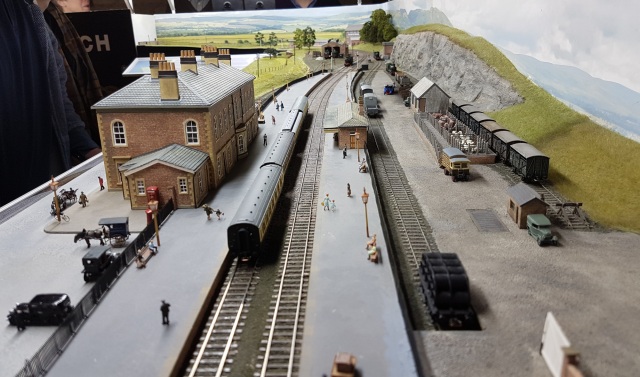 Then the enormous Kingswear.  Must be set in WW2 again, as you can see the Spitfire chasing an Me110 in the background. 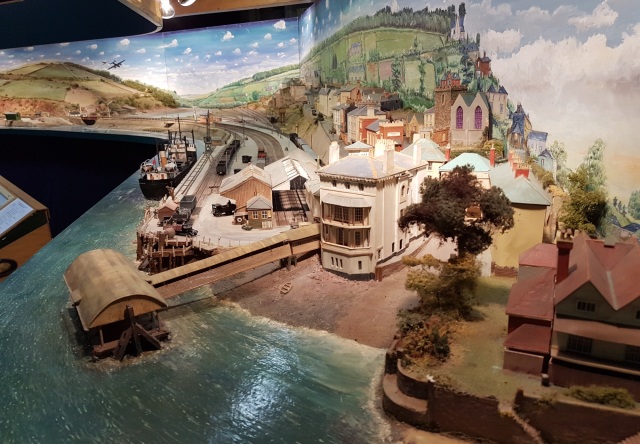 Rannoch captures the bleak character of one of Britain’s most remote railway stations.  If you get off the train at this moorland halt, there is nothing much for miles! 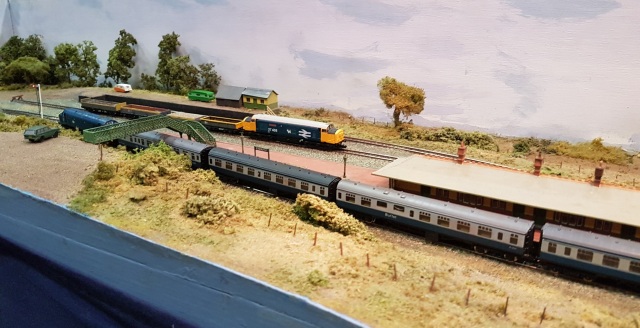 Smaller still is the amazing Forth Railway Bridge in ‘T’ scale.  This isn’t so much a model railway as an architectural model with something moving.  But so impressive! 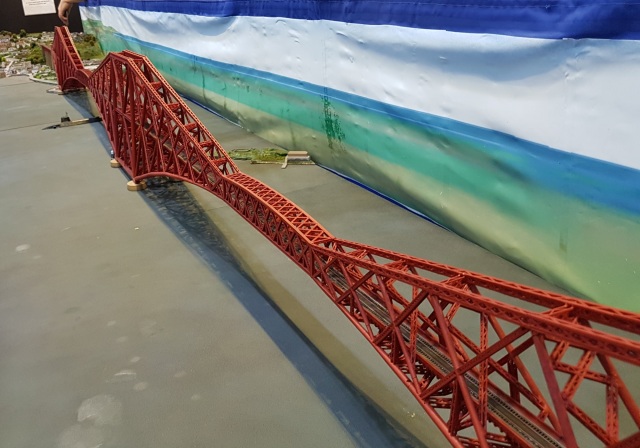 Moving up in size, Mauch Chunk was perhaps my favourite, with an accurate model of the Central of New Jersey station.  This lay on the opposite bank of the Lehigh River to my favoured Lehigh Valley Railroad.  Another example of how impressive USA prototype layouts can be when they use UK modelling styles and techniques. 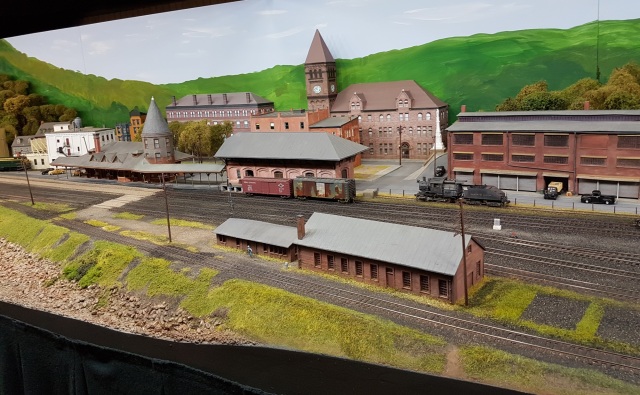 I liked the idea of modelling the miles of yard tracks by starting the fiddle yard in the open. 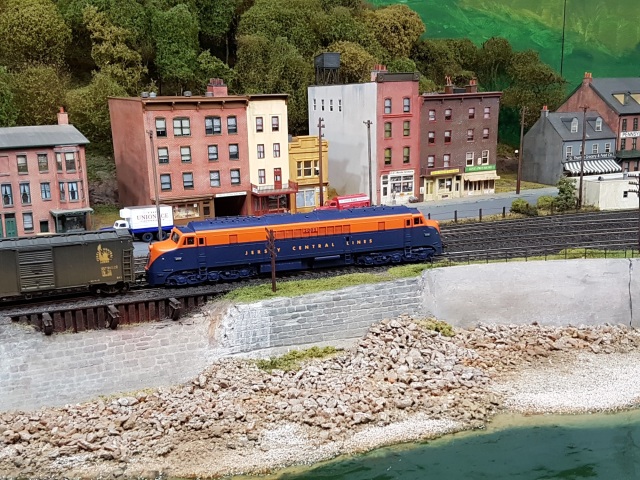 ‘Camelback’ locomotives were probably unique to the north-eastern anthracite lines.  This Reading 0-6-0 switcher is full of character. 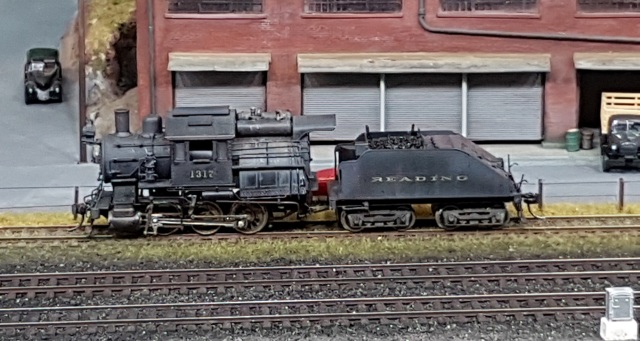