Posted on October 20, 2020 by snitchthebudgie

An interesting prototype – New York City warehouses early last century.  Certainly a good basis for a small or micro layout – and to use up all that Peco SetTrack.

A little humour, via Simon.  Mind you, I’ve laid track that looks like that…..

And yet another exhibition cancellation.  Stuttgart NCI meet 2020 is cancelled.  ESNG had decided not to exhibit this year anyway, wondering whether we would be able to get to Germany, let alone exhibit there.  But this is hardly surprising with the upturn in Covid-19 cases in Germany at the moment.  As Stefan puts it:

My task for today is to inform you that the 2020 Exhibition in Stuttgart is cancelled.

The increase of Corona infections in and around Germany have led to more restrictions.  Due to the responsibility for safety of exhibitors as well as visitors the Stuttgart Exhibition Management has decided to cancel all exhibitions till end of the year.  Till this day all of us had hope that the measures for reduction of the Corona-infections in Germany would last till winter – we were on a good way…

I wish you all a good and healthy time – keep your nerves and your positive attitude for life.  We all share a hobby where there is no room for boredom and “have to stay at home” can be changed into creativity!

I need to take that to heart – “stay at home” needs to be more creative!

Posted in Inspiration, Out and about, Prototype, Weird and wonderful | Tagged humour, inspiration, prototype, railway | Leave a comment

Posted on October 18, 2020 by snitchthebudgie

Posted in Inspiration, Out and about, Prototype | Tagged inspiration, travel | Leave a comment

Posted on October 16, 2020 by snitchthebudgie

Unfortunately I couldn’t resist Strathwood’s lockdown offer – buy five books get the cheapest free.  So a large parcel arrived with some great reading – all Southern Railway orientated you will note.  I’m sorely tempted by the volumes on the SR 4-6-0’s and 2-6-0’s as well, with the Q1’s thrown in as a bonus.  The book of the M7 shows what a complicated class they were, with all sorts of differences between locomotives.  None of them resemble the Dapol M7, in ‘N’, though, that is closer to an LSWR T1 class.

Pick of the bunch, that I would have bought anyway, is this follow up to their two excellent volumes of Southern Electric in black-and-white.  But this time they’re in colour.  Some inspirational shots here, showing that EMU’s are far from boring.

But here’s a puzzle for you – why is the wagon in the middle sitting on the wrong rails?  Or is it???  This is an Isle of Wight shot from the piers there.

Look closely and you’ll see that the third line from the left stops just before the van.  It was, together with the rail to the right of the wagons, the tracks for a gantry crane.  But you need a close look to work it out, rather than suspect a secret monorail…..

Sad to see a rail closure

Posted on October 14, 2020 by snitchthebudgie

Sad to see, Kerr’s Miniature Railway is closing after 85 years.  It has been a feature of Arbroath’s seafront since 1935, but there has been a decline in visitor numbers over the last decade.

Hopefully, the rolling stock will find a home elsewhere.  But wonderful scenes like this one are already long gone….. 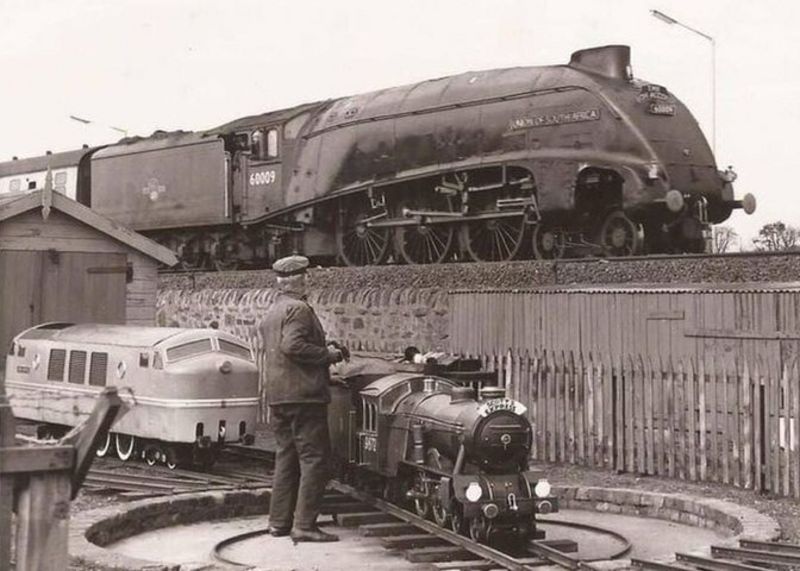 Posted in Inspiration, Out and about, Prototype | Tagged inspiration, travel | 1 Comment

Posted on October 12, 2020 by snitchthebudgie

Was this really published 30 years ago?

I still think this is the most influential book on railway modelling ever published.  It introduced a string of new concepts into modelling – for example the ‘cameo’ layout, and ‘staged’ layouts with a proscenium arch – ideas that are now nearly universal.  I still browse it for inspiration – completely recommended.

It introduced a string of buildable model railway designs, some quirky, many brilliant.  I was always struck by ‘Cannonsgate Goods Depot.’  I tried to work our how to build this in a small space in ‘O’ gauge (this was pre-ESNG days), but failed (as is usually the case.)  It was about the same time that ‘Lightermans Yard’ was started in 2mm Fine Scale to the same plan.  Perhaps I should have done the same?

Meanwhile, here are a couple of lovely pictures of the Brighton main line in the 1920’s – at Earlswood, a stones throw from our present home.  I wish these locos were still running!

Posted on October 10, 2020 by snitchthebudgie

Progress on the railway continues to be limited to say the least.  I continue to try and plan my next railway with little success.  So many ideas, and so few that really excite!  But the last few weeks have been pleasant enough – a chance to get out for a few meals, the always interesting (if you like rabbits and cat litter) ESNG Zoom meetings, and a pile of good books to read.

But what are my problems in design…..

And are these the solutions?

Or to put it another way, do ANYTHING!  Just start building again.

Posted on October 8, 2020 by snitchthebudgie

Back on Zoom tonight for yet another club meeting.  Good to see everyone again.  No Peter tonight, as he was down at the caravan….

Down in West Sussex at the moment, oh, a Class 700 followed by a track cleaning train have just whizzed past. The GWR daily driver knowledge train to Brighton is also due, it doesn’t seem to appear on the timetable.

I gather the third GWR service between Reading and Gatwick has been approved by NR, weekdays only at first.

Incidentally, went into a local antiques shop on Saturday, and purchased a Trix German 2-10-0 for £10. It works, just, after a bit of TLC but there seems to be a problem with one of the wheel sets. Do you or any of the club members know of anyone who could have a look at it. I guess being an older locomotive, spares may be a problem.

Unfortunately, will not be able to join you for the ‘meeting’ this evening as we have an appointment. Enjoy and will hopefully ‘meet’ up next time.

We were also missing a visit from Maxine, as ESNG clashed with the WI (digitally that is – I wouldn’t risk a disagreement with that lot!)

However, it was great to see Paul with both sound and vision, and see some of his new purchases.  Graham appeared clearer than before, but still no sound.  And these meetings seem to have driven Brian to drink – or maybe it was his experiences with Gorilla Glue.

It continues to be a treat to be able to meet up with good friends, albeit on-line.  I really must start modelling again and have something to show-and-tell, before Paul completely fills his lounge with bullet trains….

Thinking of that Gorilla Glue…..

Another year of blogging

Posted on October 6, 2020 by snitchthebudgie

Amazingly, WordPress has just told me that I have been blogging for seven years.  The statistics for this time are:

Haven’t you lot got anything better to do?

Interestingly, the list of most popular posts has remained pretty constant for the past few years.  Here are the top 12 posts:

I remain surprised how my ‘Minories’ posts remain the most read over the four years since they were written.  And there is a continuing interest in traction layouts and shelf, small and micro-layouts.

I’d confess that I get a bit stressed with Google these days.  If you Google ‘Minories’ or some of these other topics, and look at the images, you are referred to esngblog.  I suppose that’s a sort of fame, but it’s very frustrating when I am the one looking for new ideas!

Perhaps I should build that Minories layout I keep talking about……

Posted on October 4, 2020 by snitchthebudgie

I am a firm believer in looking at other scales other than ‘N’.  And I can’t cope with criticisms of exhibitions that moan about, “Not much ‘N’ there.”  Surely, one can take inspiration from any scale or gauge, and they are all trains, aren’t they?

So I was delighted to see that the P4 specialist Scalefour Society were holding an online exhibition.  It was well worth a visit, and most of the exhibits are being held online, with YouTube videos, for anyone who wants to catch up with them.

The site itself is here.

I have selected a few layout videos that I especially enjoyed.

Vincent de Bode’s De Graafstroom is nothing short of brilliant!  I have seen it in the flesh a couple of times, and would happily travel to a show to see it again.  This layout portrays a fictitious narrow gauge (Cape gauge?) tramline which follows the small Dutch river “de Alblas”, modelled in  1947.  Note the moving scenic items, such as the flying stork, the swan, and especially the lovely Dutch sailing barge.  The other videos on the site are also worth a look, including one of how the layout breaks down to travel on a car roof.

Keeping the European theme, Geraint Hughes’ Obbekaer is set on a Danish branchline.  His video is all the more impressive for having been recorded in the lounge on his phone!  I have seen this layout, too, and it’s simple, but interesting, and a welcome break from the traditional GWR branchline.

They say that Hull is virtually Europe, and does have some very Dutch architecture in places.  Mike Knowles ‘Boston Frodsham’ shows modern(ish) image shunting somewhere around the Hull docks.  It is set in 1975-1985 (ish) and is part based on the swing bridge at the entrance to Boston Docks and also the wharf at Frodsham in Cheshire.  Another simple but very attractive layout.

Finally, a large London terminus in the glory days of the LSWR, Southwark Bridge.  There’s about an hour of video available on line, with all the details of designing, building and operating the layout.  I’ve linked to the video on rolling stock, as this includes some beautiful locomotives in full LSWR livery.  Pity I can’t do this in ‘N’….

Posted on October 2, 2020 by snitchthebudgie

Because it has been one of those funny five week months, I made the executive decision to meet on the 30th, as well as next Wednesday.  The usual suspects were in attendance, and Good to see Paul managing to log in – but silently, as his sound didn’t seem to be working.

Phil was showing off his Night Mail set, and Brian what he claimed was a glass of water.  Maxine joined the meeting for a while, and Paul showed us some trains in action on his living room layout.  As usual, there was 90 minutes of sparking conversation – little of which mentioned railways.

Allan managed to follow Ron’s instructions but made a sudden exit near the end of the meeting.  I thought it might be something I said, but…

Battery died.  Should have had it plugged it in the mains and not run it off the battery.

We didn’t see Graham on-line, but all was revealed in his email later….

Now I have a new Hub I was going to join the meeting, but the email for the zoom invite had disappeared, and also the app.

I tried to reconnect, by the time I had connected I think the meeting had finished .

He’ll get there eventually!  We’ll see who logs in next week.