Posted on October 15, 2013 by snitchthebudgie

Layout design – rather than building – may be my favourite part of the hobby.  I can read books and magazines of designs for ever and a day, and the first thing I look at in a layout described in the model press is the track layout.  Never mind how good the modelling is – is there inspiration in the design.

When it came to my modules, I came to an unfortunate conclusion – I like single track branch lines.  Although N-club single track modules are possible, I wanted to start off with a double track layout to fit easily into the club setup and maybe even go to Stuttgart.

So what to build?  I toyed with Pacific Electric at North Hollywood or at San Pedro, but this moved me away from the Lehigh Valley.  I designed a few layouts with a separate switching area and the double track main line just passing through.  Nothing quite worked.

I then returned to an idea that I’d come across some time ago.   In Central New York State, the Rahway Valley Railroad ran for 15 miles and interchanged with the Lehigh Valley, Jersey Central and Delaware, Lackawanna and Western (for more information, see  http://trainweb.org/rahwayvalley/).  The Lehigh Valley interchange at Roselle Park was of particular interest. 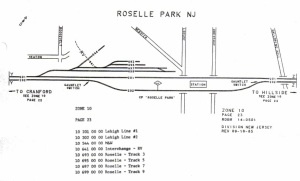 The layout shown is the later version of the plan, when the main line was raised to bridge the roads that crossed at three locations, and to join the Lehigh Valley and Jersey Central main lines.  However, the plan as shown is a great basis for a junction, with that interesting crossing of the branch tracks heading north-west, and one of the sidings. 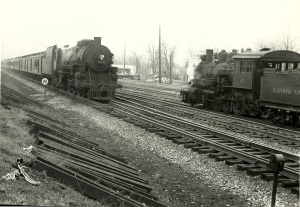 The photo below (from the collection of Jeffrey J. Jargosch; photo repair by Michael Kaplonski) shows the interchange in steam days.  You can still see the main line and the route of the abandoned branch on Google Earth.

The layout as shown fits well on 2 x 800mm and 1 x 1200mm modules.  I’ll model the junction as the terminus of a Lehigh Valley freight branch, rather than as the Rahway Valley Railroad.  The main lines will link up to N-club elsewhere, and at home, a fiddle yard on the branch will allow some shunting / switching and a little operation.

So it’s full steam (or rather, full diesel) ahead with the Lehigh Valley!