Posted on October 9, 2017 by snitchthebudgie

Having successfully differentiated Farnham from Fareham, it was off to the Croydon MRS exhibition at Warlingham.  It was a very good show, with some excellent layouts, perhaps spoilt in places by poor lighting.  BH Enterprises were in a very dim spot, and were considering issuing miner’s helmets to peruse their stock.  At least the lighting would have allowed Bob to doze off unnoticed…..

In these two posts I’ll work up the scales, starting with ‘N’.  Atlantic Road has become a bit of a local regular, but always worth a look.  A good variety of trains running in location that ‘oozes’ South (or should it be ‘‘ Sarf’) London. 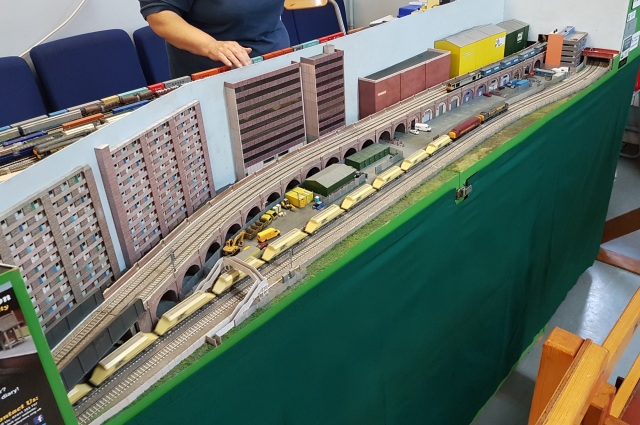 Banbury is a fine model of the prototype station but it was a little monochrome when I passed by, with prototypical masses of DMUs on display.  The interesting part of the timetable came later.  Banbury station brings back memories of how we analysed the flooding in Banbury by comparing pictures of the station in 1998 and the 1930’s.  The levels of flooding (close to platform level) were similar, and showed that the 1998 floods weren’t as rare as everyone was claiming!

Hookhills Viaduct just models the viaduct that is on the line from Newton Abbott to Kingswear, and the period is set to be 1961/2. 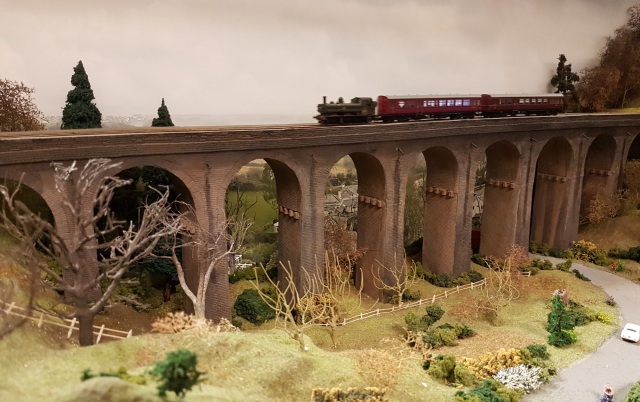 Willmich am Rhein models a stretch of DB line between two tunnels running parallel to the Rhine.  A chance to just watch the trains go by, and, for the builders, bring a favourite holiday spot home with you. 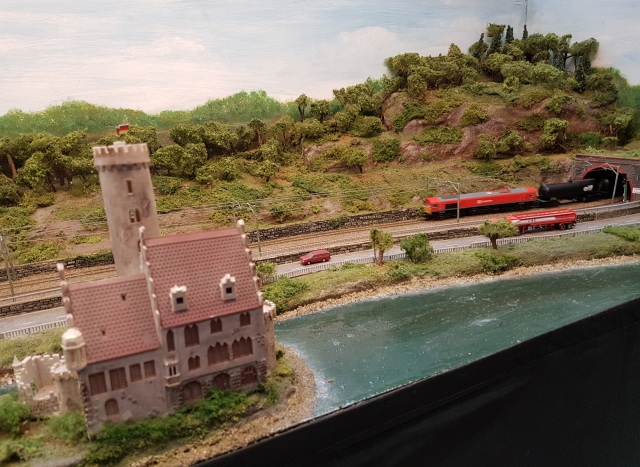 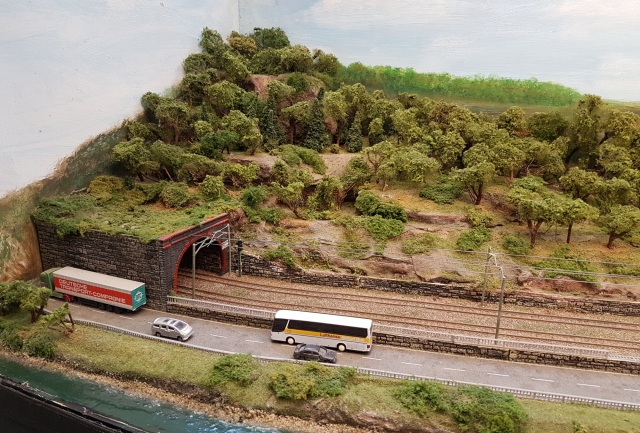 Good to see Southbridge again.  Modelling the GWR 1934-48, the eagle-eyed would have spotted the new Farish Castle on expresses.  To me, this is the acceptable end of GWR modelling…. 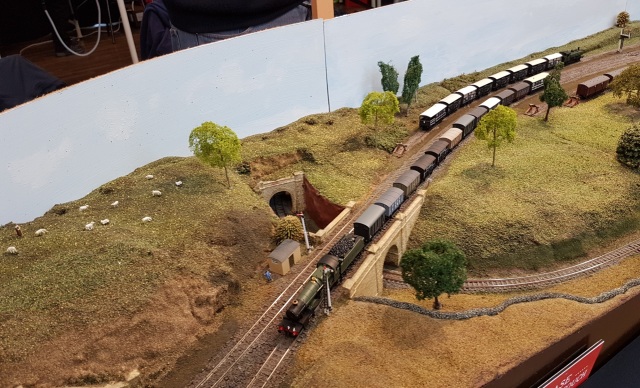 Paul had his Kato Racetrack on display, in a bigger and better format.  However, no-one gave him any tables and he was running late with the setup.  Fortunately, by the time I left, trains were on the move. 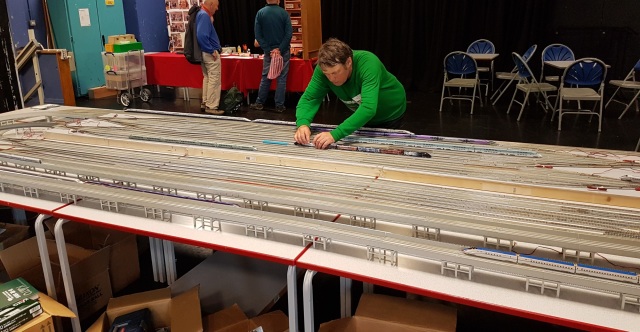 Moving up to TT, or to be more accurate, 3mm scale, Whatlington models a real location but imaginary railway in Sussex.  Here, a Class 33 is doing a little gentle shunting. 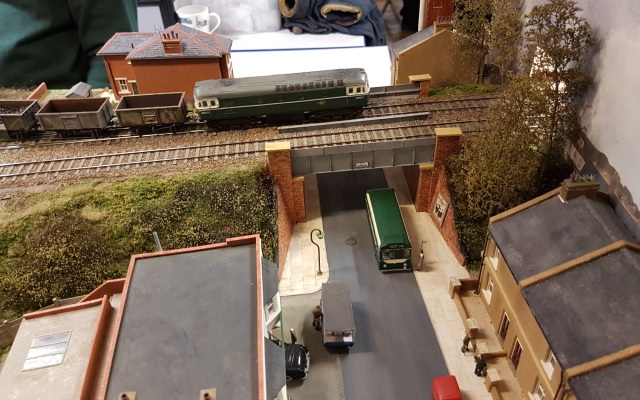 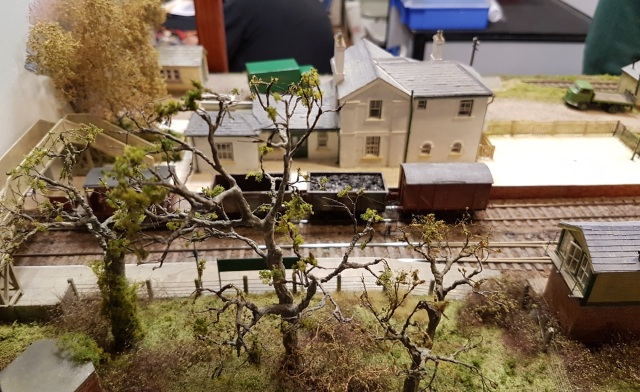 The other 3mm layout was Hemyock, a model of the Culm Valley line in GWR days.  Hemyock is almost the perfect branch line terminus, being well appointed with locomotive, carriage and goods sheds.  It features an impressive dairy beyond the terminus proper, that kept the line open till 1975. 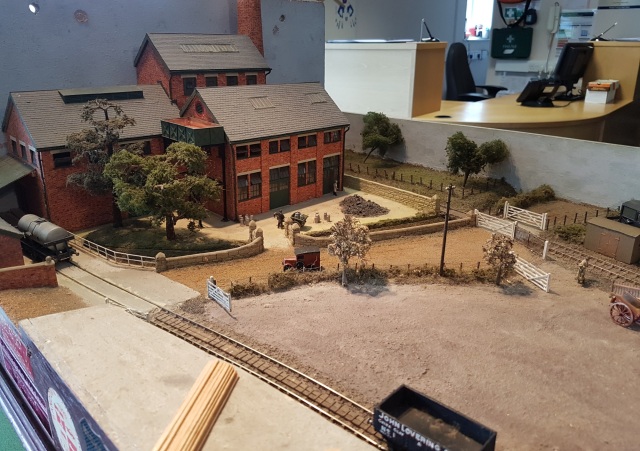 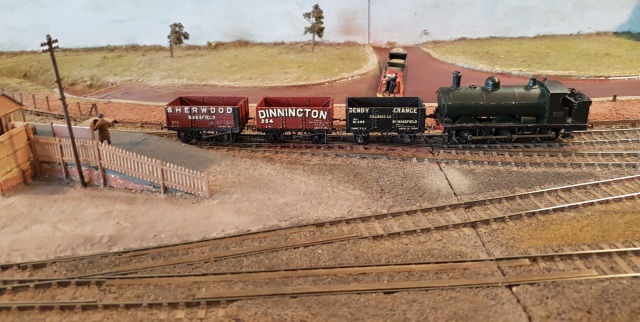