Posted on February 12, 2018 by snitchthebudgie

Some more progress with buildings for the first module.

These two half-relief row houses are Walther’s kits.  The left hand one was salvaged from Earl’s Wood.  The right hand one is new, but the kit has been ‘in stock’ since I built the first one 10 years ago.  These models go together very easily, and I built the new one in a couple of evenings – one to pre-paint most of the parts and one to put them together.  A little weathering is, again, needed, but they then will be turned through 180 degrees to form a background to the modules.

Walther’s kits are excellent, but perhaps predictable, as they are so widely used.  The Rix bridge is even commoner, I guess, but every self respecting USA layout should have one!  Again, an easy build, with the piers spaced to suit the tracks already laid.  I was pleased that the three bridge kits used come to about 390mm in width, whilst the baseboard is 400mm wide.  This allows a small gap to be left on each side.  Perhaps not ideal scenically, but it will allow the module to be boxed without wrecking the scenery.

The road traffic on the bridge was again salvaged from Earl’s Wood.  The picture below shows the bridge around its final position on the module. 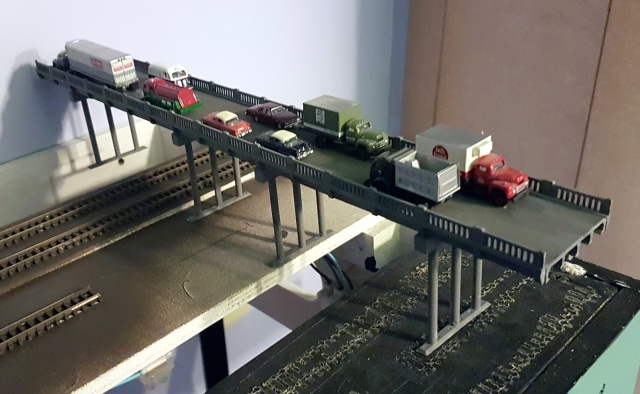 And an unusual modelling idea – no trains due to balloons!  The BBC reported , with absolutely appropriate alliteration….

Bunch of balloons in Billericay halts trains in their tracks

Rush-hour trains were disrupted for more than two hours by a bunch of balloons tangled on overhead lines.  Commuters using Greater Anglia services were delayed in the Billericay area of Essex when about 50 yellow and black balloons got stuck.

One commuter said his driver announced a “party balloon” was to blame.  Asked why a train could not plough through balloons, Greater Anglia said they could damage the train. Network Rail engineers removed them.

Disruption to trains started just after 08:00 GMT on Friday and lasted until 10:35. 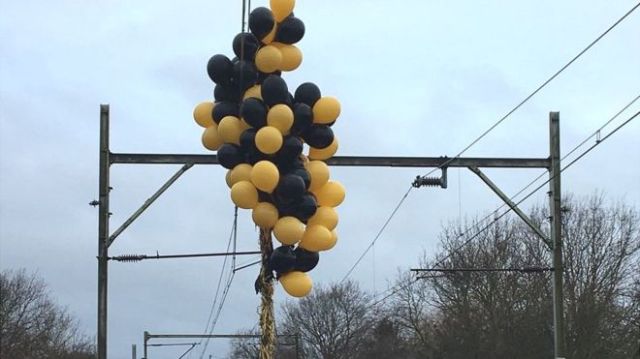