Another pleasant afternoon running trains at the PlayDay.  We, of course, started with a curry, and were joined by Ron celebrating his 67th birthday.  And Miles, who demolished a large number of samosas after the Ruchita accidentally double up his order.  We couldn’t persuade Ron to pay the bill, though….

Nine of us met to run trains, though there was a certain amount of checking phones for the Grand Prix and Premiership progress.  And, as usual, a lot of talking.  By the end of the afternoon, most of us were sitting around chatting.

I had managed to change the couplings on one of my PA’s, so ran my Lehigh Valley passenger train.  A couple of things need fettling, but it looked good running around the layout.  There is the inevitable difference in shades of red, but they look acceptably different – different paint batches and fading in service? 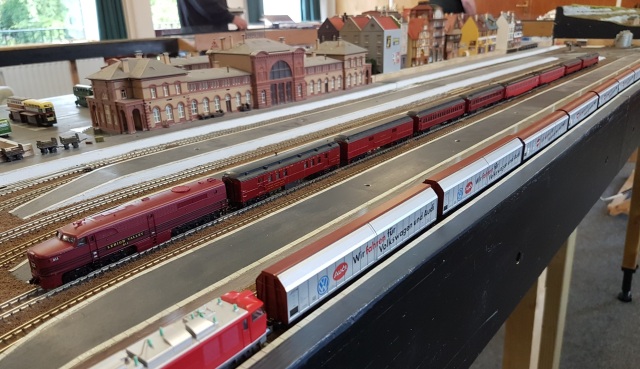 It was American day as both Simon and Graham had more US trains on show.

But there was some Swiss and Japanese freight from Paul….

And the Longmoor Military Railway from Derek….

I finally gave my latest Ebay purchase a run.  I’ve got a couple of these, but couldn’t resist another one.  My favourie Japanese tram, and they are close enough to US designs to pass muster as an interurban.