Like many of the UK model railway community, I have been shocked and saddened by the news about the Market Deeping MRC show in Stamford.  As you have probably read, it had to be cancelled after four teenagers broke into the school at 4am on the Friday night and totally trashed four layouts and some traders stands, that had been set up early.  It is probably fortunate that prompt action by neighbours, caretaker, and police prevented any damage to a second hall.  Another nine layouts were due on the Saturday, and escaped damage.  These photos, from the local paper, show the shocking extent of the damage.  It was also the most read article on the BBC for a while. 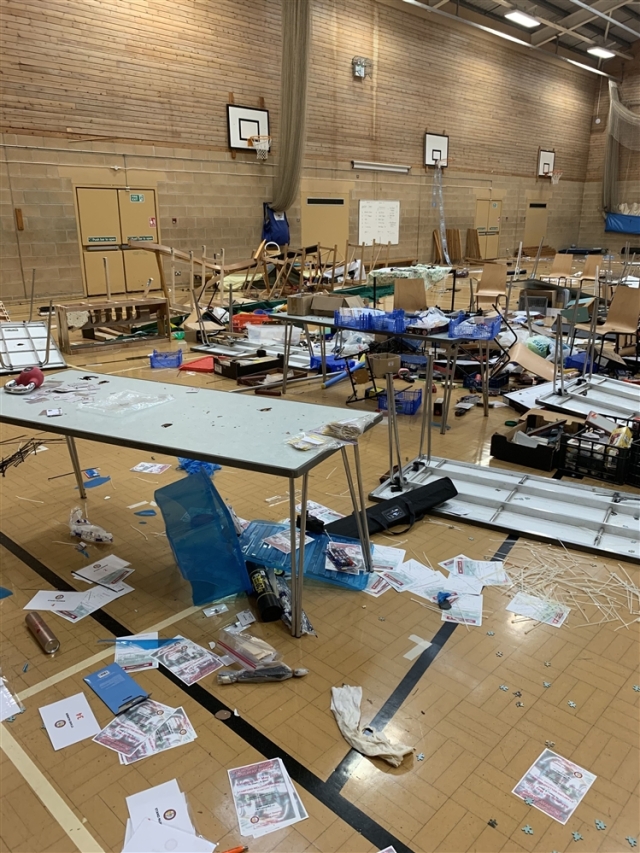 There is little that can be said when one sees these photographs.  What could compensate financially for 20 years work on a layout, or for the locomotive above?  However, it is at least good to see the strength of our hobby.  Market Deeping club have set up a Just Giving page to with a target of £500 for their immediate expenses.  As I write on Sunday afternoon, it is already at £5,315 (and has doubled as I wrote this post!)  [Amazingly, it’s up to £31,000 when I looked at 10:00pm – modellers can be wonderful, sometimes!]

This is probably an isolated incident, but it does raise some questions about our exhibitions.  These are usually very well organised, but are most definitely also run by amateurs.  My reaction as an exhibition manager is to ask:

Some guidance would be helpful from the insurance business, or perhaps from the organisers of our more commercial shows such as TINGS and Ally Pally.  Perhaps at the end of the day we need to put this into perspective.  Hopefully an isolated incident, and with losses that are probably a fraction of those to flood, fire and burglary?

I can only offer my best wishes to the Market Deeping MRC, and that they will recover, stronger if scarred, in the future.

Secretary of the East Surrey N Gauge railway club
View all posts by snitchthebudgie →
This entry was posted in Exhibitions, Out and about and tagged exhibition, model railway. Bookmark the permalink.