Posted on September 26, 2019 by snitchthebudgie

I had thought that I was away this weekend, but a recent check with my diary and Maxine’s diary showed that I’d got the date wrong – it’s next weekend.  Must be an age thing.  Despite a hectic week, I thought that I’d take in an exhibition.

Sean was at Cranleigh – with flyers.  Derek was going to the West Sussex open day – too early for me as I was getting my flu jab.  Seaboard Southern NMRA show was appealing – but Simon was delivering NGSE flyers there.  So I opted for a trip north of the river to the Mid Essex show in Shenfield.  An easy run there, M25 and a little bit of the A12.  Coming home was a bit slower, but it was worth the trek.

One traffic problem on the M25 was a blonde young lady driving a red sports car at 55mph in the 3rd lane – well, it was Essex!

Plenty of good things on show, including a couple of favourite layouts.  A new one to me was Aldwych Underground (OO).  A well presented diorama of the wartime scenes above ground and the underground line underneath.

On the surface, recent bomb damage from tonight’s raid is evident…. 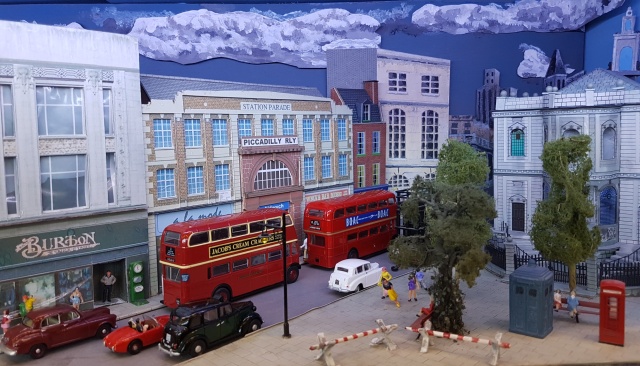 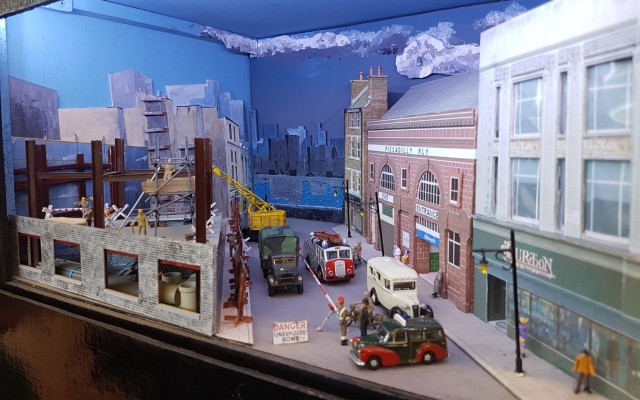 Underground, there is still a train service, though much of Aldwych station was used as a shelter and also to store artefacts from the British Museum.

And most cleverly, there are two portholes in the facia.  In one, we see repairs to the sewers under way… 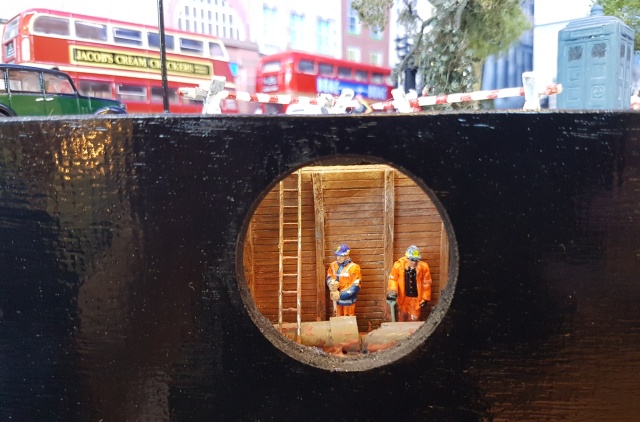 And in the other, they are defusing a little present from Mr. Hitler! 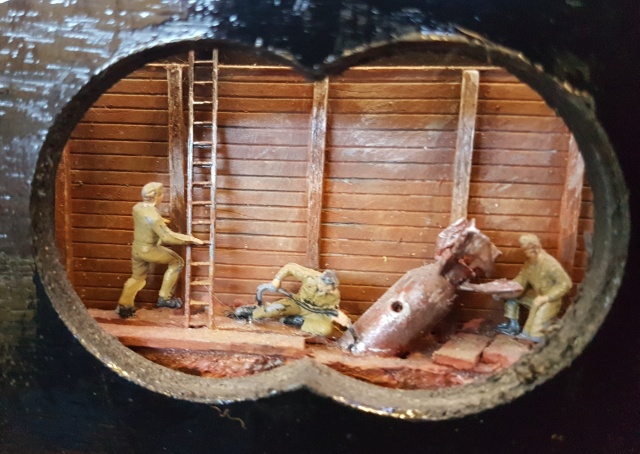 A favourite layout of mine is Kyle of Lochalsh (2mm finescale.)  A micro layout that captures the character of the Scottish prototype.  I like the fiddle yard traverser design, with sketches of the original concept displayed over the trains.

One reason for visiting the show was Tower Pier (EM).  I don’t think that I have seen this layout in the flesh before, though I have seen pictures on the internet.  Tower Pier is located somewhere near the Tower of London, and receives passenger services from the LNER and third rail electric services from the ex-Southern lines.  There’s also a small yard for interchange with the London Docks nearby.  The slightly raised goods yard added to the basic ‘Minories’ design gives this little layout a lot of character. 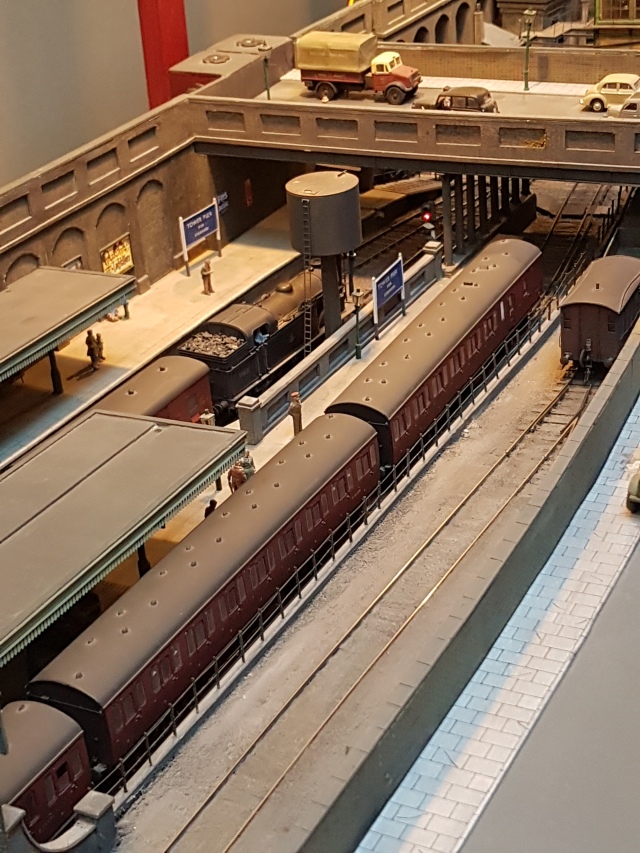 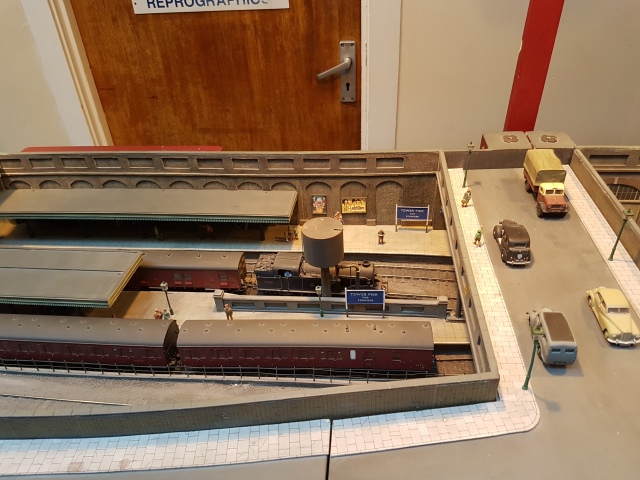 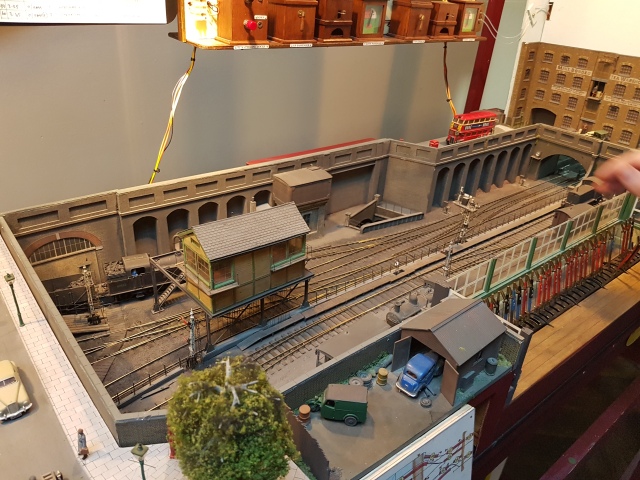 And it has a full level frame and bell instrument to control services into the station. 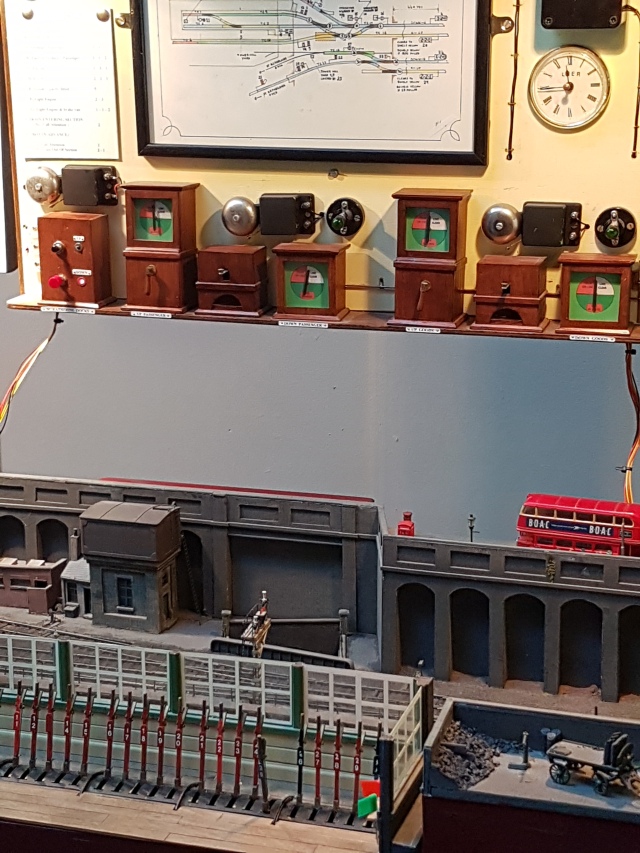