Posted on October 18, 2019 by snitchthebudgie

The Farnham OO9 modular layout is obviously a work in progress, but it was all working well on the day, and has a lot of potential for future years.

Thorneycroft Factory Sidings (N) models this corner of Basingstoke around 1930.  The commercial vehicle factory was shunted by an ex-LSWR G6 (in the photo) and the passenger trains passing were hauled by an ex-LSWR O2.  Both locomotives have been modelled for the layout.

Wickwar (N) is always worth a look.  A lovely slice of English countryside, and the trains passing through are almost a bonus.  One of the operators was showing off the moving bus in the first photograph, that worked well, except when he drove it into a stone wall.  There is a nice bit of animation, as the lady standing outside the station raises her arm to hail the bus.  Of course, she is still standing there after the bus passes, so really it shouldn’t stop – just like the real thing….

Calstock Halton Quay (On16.5) has some good ship modelling.  I liked the fact that the tide is out, and that they had modelled the sandy sea bed. 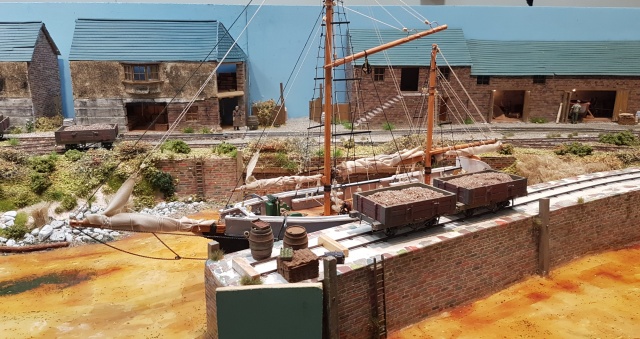 Corwenna (OO) has a bit of the feel of Iain Rice’s Tetrice, but is larger and the similarities are probably completely coincidental.  I hadn’t seen this layout before, but really liked it, with an interesting track layout, details and rolling stock.

Dent Head (N) is based on the area around Dent on the Settle and Carlisle.  The station has shades of Garsdale Road, the 1960’s EM layout of the late, great, David Jenkinson.  However, that tight curve through the station looked better in EM than it does in N…

Finally, 29th Street Wharf (HO) is a standard, but nicely executed, USA switching layout/shunting puzzle, moving stone from one end of the layout to the other. (Reminds me of the Two Ronnie’s in the 1970’s, where the gardeners were moving a hole from one end of the garden to the other.  Or Redhill, where the gas and water companies are similarly occupied!)

So that’s Farnham for another year.  We’ll move onto Croydon now….