Posted on May 6, 2020 by snitchthebudgie

Still here!  People are writing a lot about the psychological effects of Covid-19.  In the Bartlett household lock-in is definitely having strange effects.  I spent 3 hours digging in the garden yesterday and 3 today.  Never mind the psychology – I’ve discovered some new muscles and they’re complaining.  Surrey CC are promising to reopen the tip next week, thank goodness, to get rid of some of my diggings, but I bet the queue goes back to Horley due to social distancing!  Also coffee drinking habits are changing. From a dark Americano from the mokka pot, I’ve moved onto a triple espresso from my old Aeropress.  I hate to think what’ll happen next….

But out in the garden, aided by my faithful Robin, we rather liked this Orange Tip butterfly.  It refused to open its wings and show the orange though.

Indoors, there has been some railway progress.  2 or 3 years ago I bought some Warwell and Warflat kits (7 to be precise) to form a military train.  I’ve been building them, plus the loads.  I’m waiting for some 3-D printed Cromwell tanks and Staghound armoured cars to form the rest of the loads.

I’ve built the wagons, and slapped a bit of paint underneath. 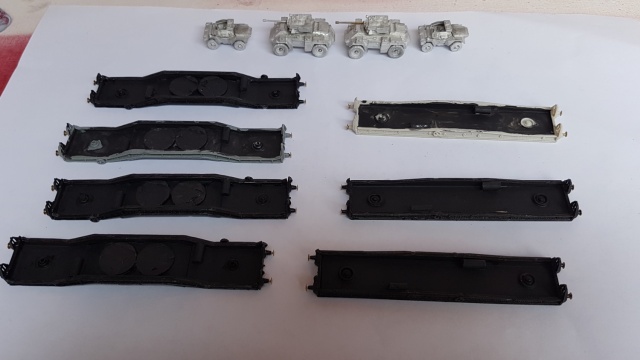 And a quick spray of primer for the top.  It shows the bad joints in places, but it’ll do.  I’m trying to work out how to add couplings without having to cut away the jacks on the end of the wagons.  I’ll be using a fixed bar between the NEM couplings, anyway.  But it may need a little fettling to shorten the coupling mount to bring it inside the wagon solebar.  Tomorrow’s challenge!  Next job is some olive drab and wood paint for the wagons. 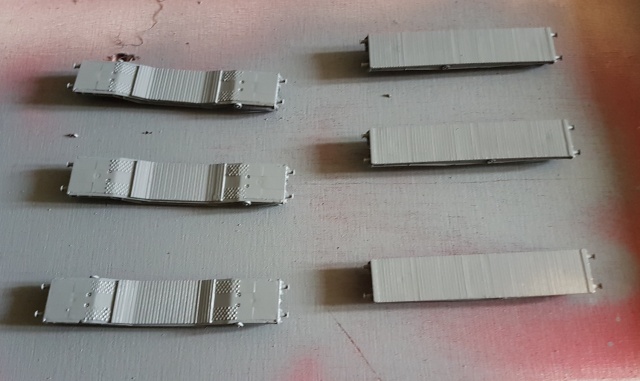 If, like me, you are missing ESNG club nights, this picture will remind you of running on the layout.  North Shore interurbans in Chicago.  The curves were so tight that the signalman was meant to let one train through at a time.  Obviously he didn’t….