Posted on October 29, 2020 by snitchthebudgie

I saw this photograph posted on Facebook by Derek Martin, and asked if I could share it.  It’s a fine shot of the up Golden Arrow passing through platform 1 of Petts Wood station. 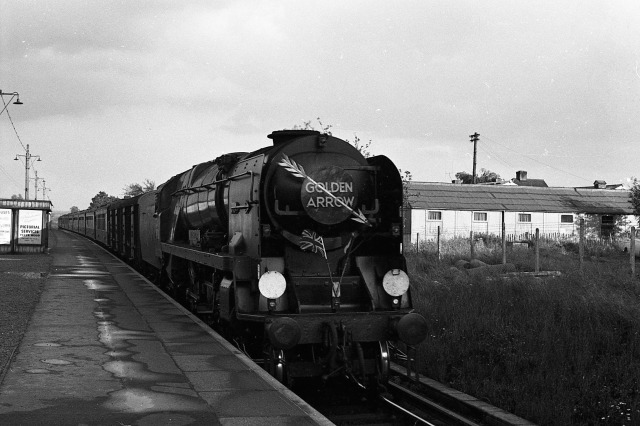 I was brought up in Petts Wood, and this scene is very familiar.  I remember seeing the Golden Arrow, stream hauled, passing as I went back to infants school after lunch. And early train spotting days caught it with a class 71 electric on the front.  We’re looking south in this photograph, with the old British Legion Club building on the right.  All long gone, though the garage behind it is still there.

Petts Wood was built as a temporary wooden station by the (real) Southern Railway in the 1930’s, as the suburbs, and electrification, spread out from central London. The station has never been rebuilt, although the goods yard has disappeared under a supermarket.

I posted this picture back in 2016, when Maxine and I went back to my roots for a wedding.  The Networker is in much the same place as the Golden Arrow. The station hadn’t changed much, except for an extension to the original ‘temporary’ station building.  Note how the vegetation has grown over the past 60 years!  No cinders to set fire to the lineside, I guess.

Secretary of the East Surrey N Gauge railway club
View all posts by snitchthebudgie →
This entry was posted in Inspiration, Out and about, Prototype, Weird and wonderful and tagged inspiration, prototype, railway, Southern Railway. Bookmark the permalink.