Did I really buy all these books?

Posted on November 6, 2021 by snitchthebudgie

Wondering why I haven’t got much modelling done recently, I decided to have a good tidy up of my books and models.  I started in our lounge, and collected all the railway books that were lurking in various corners, to return to my bookcases in the railway room.  I was shocked to see this pile that accumulated on the sofa.  Perhaps half of them were old ones brought downstairs for reference or reading.  The rest were purchases over the past 18 months – some new, some second hand, and a few special offers that couldn’t be resisted.  I can totally blame covid and lockdowns for all this shopping!

There are definite themes here.  Isle of Wight to the left.  Southern steam in the middle.  Southern electrics to the right.  Plus some other odds and ends such as the Somerset and Dorset and the Metropolitan Railway.

I remember a quote that is actually quite accurate for reference books – “I have read all of some of them and some of all of them.”  That’s true of my railway books (and for that matter my theological and ornithological ones!)  There are some that I have read repeatedly and give me great pleasure.  Others were bought for reference, and I have used them for a particular model or planning exercise.

I just hope that the rest of you aren’t this bad!!!

Posted on November 4, 2021 by snitchthebudgie

Sorry, I’ve missed a few days blogging – all well in the household, but it seems to have been rather busy.  Too many breakfasts out, I think.  This is Redhill aerodrome on a cold, misty, autumnal morning.

But on Wednesday evening, it was time for the usual ESNG meeting.  Just the five members attended, but we had a pleasant and relaxed evening running trains.

The usual Japanese selection from Paul.  Thomas-san also made an appearance, but he’s had quite enough media coverage on this blog recently…

The Farish Blue Pullman is certainly one of their best models.  I wonder how long it will be before someone brings out the HST version? 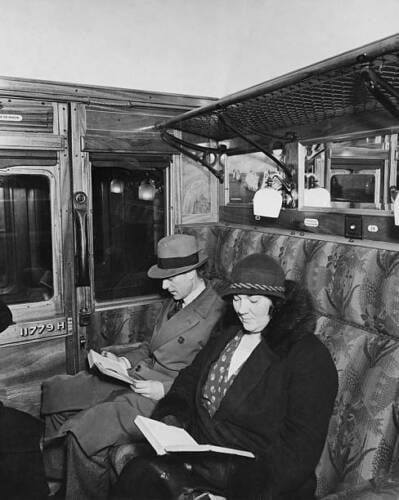 Posted on October 26, 2021 by snitchthebudgie

Seven members turned out on a autumnal Sunday afternoon to play trains.  A fun afternoon with good company, and cakes provided by the Cha(i)rman – Christmas cupcakes with a sell-by date of 27/10/2021.  We have to record that they failed to get to the 27th…. 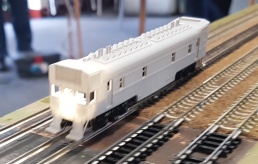 Allan was somewhere in Germany….

Brian with trains from the UK and the Netherlands….

And Brian recorded the highlights for us…..

The day before Brian had filmed the prototype for his Class 73 over at Tonbridge….

Posted on October 24, 2021 by snitchthebudgie

Now here’s a modelling challenge for you – lots of water involved!

I do like Jago Hazzard – so here’s his take on the ‘Drain’.  Useless fact – the units on the Waterloo and City are one of the few that don’t have windscreen wipers – it never drains down there.

Back next time with a record of Sunday’s ESNG meeting.

Posted in Inspiration, Out and about, Prototype | Tagged inspiration, prototype, railway, Southern Railway | Leave a comment

Posted on October 22, 2021 by snitchthebudgie

Six of the usual suspects on duty tonight….

Plenty of trains on the move, including some of Michael’s stock…. 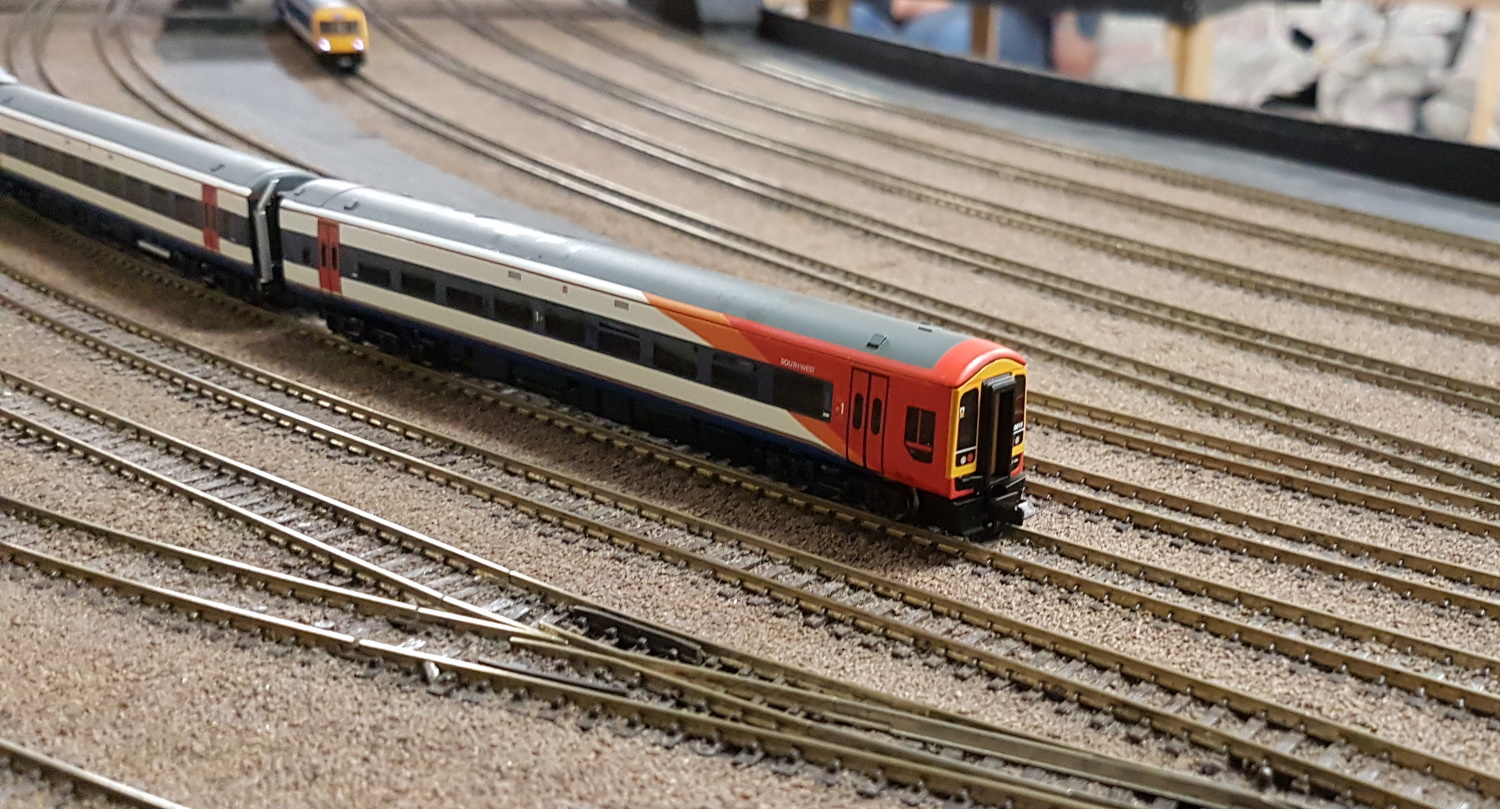 And the inevitable Japanese additions from Paul…..

Back on Sunday for another session!

Posted on October 20, 2021 by snitchthebudgie

Back to Uckfield for the rest of the layouts.

Sherton Abbas in finescale ‘0’ is a delightful model, with some excellent modelling,  Yes, it’s a GWR branchline, but it’s set in the Edwardian era, when the GWR was less standardised and generally more interesting than its later years.  Definitely a show highlight!

Whilst Clearwater Harbour is just On30, somewhere in North America…. 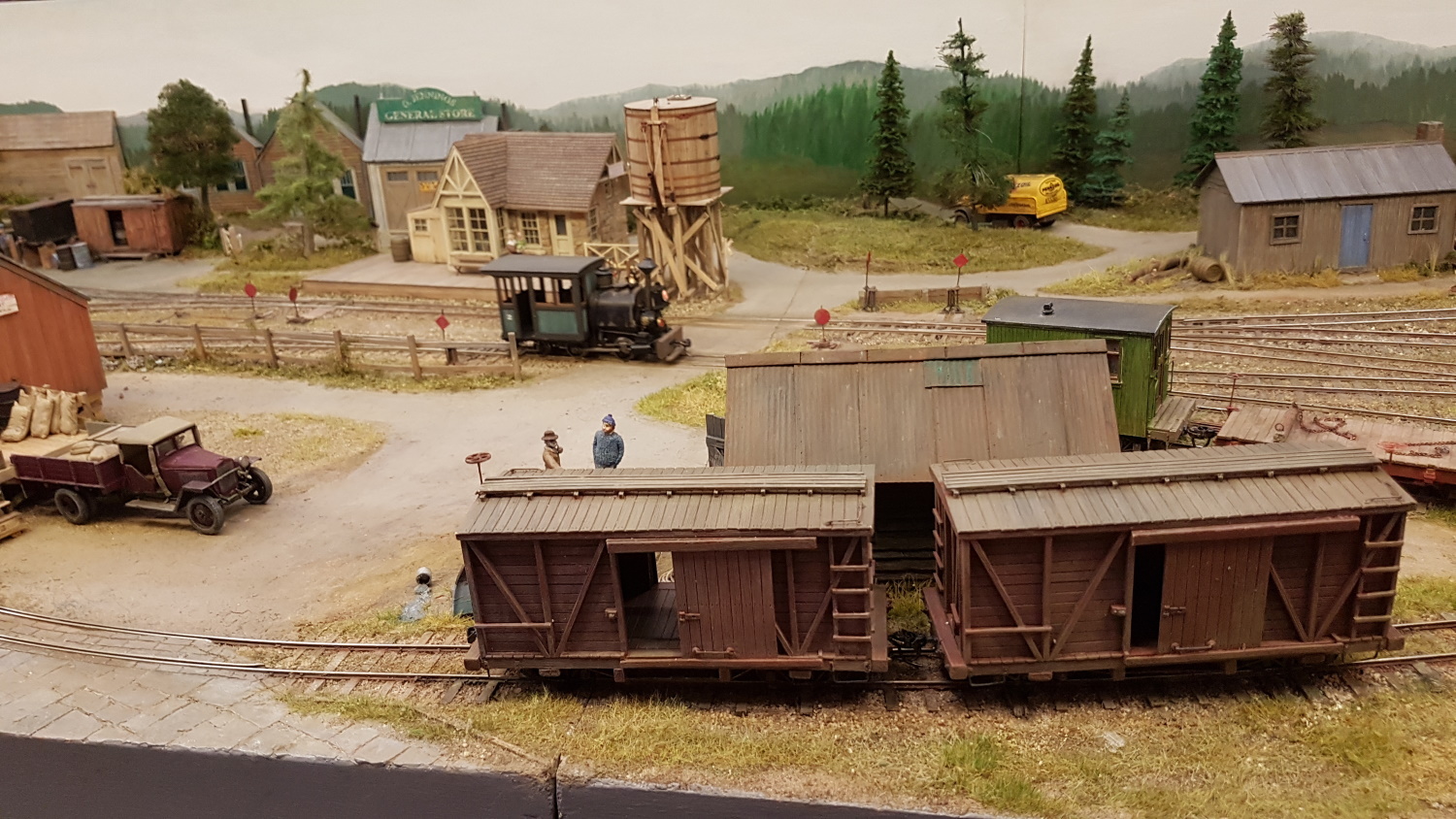 Great Bardfield, in P4, is set in deepest Essex, home of light railways such as the Colne Valley….

Which leaves another GWR branch line, but another very special one.  Modbury is in 2mm finescale and again set in Edwardian days.  There’s some interesting trackwork here, as Ian Smith has modelled some of the track as Brunel’s Baulk Road – it may have been broad gauge at one time.  Another show highlight here, inspiring me to try harder!

The fiddle yard turntables were especially useful to see, with the clever latches at the end.  Lovely rolling stock, as well, especially the coaches.

So, that’s the Uckfield show.  I’m not sure where I’ll try next.  Perhaps Tolworth, as I usually find that a good show and it seems to be going ahead.  We’ll see….

Posted in Exhibitions, Inspiration, Out and about | Tagged exhibition, inspiration, model railway | Leave a comment

Posted on October 18, 2021 by snitchthebudgie

I took my life in my hands and visited my first model railway exhibition since covid this afternoon.  Uckfield is one of my favourite shows, so I slipped down there on Sunday afternoon, hoping (reasonably successfully) to miss the crush.

In the end I visited for 45 minutes or so. Enough time to see everything, and chat to a few people that I knew, before it all seemed a bit too crowded.  As always a good show and some excellent layouts. My only criticism was not the show, but the punters. When there are numerous signs politely requesting mask wearing when moving around the hall, why are so many people ignoring it? I’m sure most of them weren’t exempt, just rude and bl**dy minded!  Still, it was great to get back to a show after 18 months or so, but I shall be selective which ones I go to this autumn.

But what about the trains, they said!

We start with Marmagne, a French branch line in H0.  An attractive scene made even better by those wonderful French railcars.  I love the ones with the driver sitting in the roof! 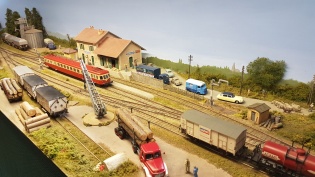 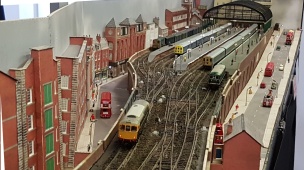 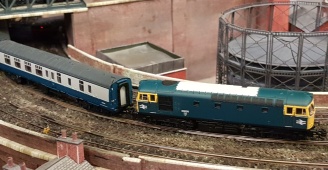 One of the show highlights was John Greenwood’s 2mm layout.  He has a grand plan to model the western end of the Southern Railway, including Wenfordbridge, Bodmin, Boscarne, Wadebridge and Padstow.  Wadebridge, and the close to complete Padstow, made the trip from his loft to Uckfield.

I’ve seen Wadebridge before, but it bears another close look.  Some lovely scratch built locos are in the engine shed – especially the 2-4-0T Beattie well tank and the 4-4-0 T9.

Padstow is very clever, with the line laid out to loop around the estuary to include the long girder bridge and link up to Wadebridge. 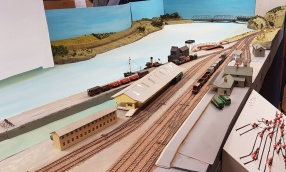 I liked Llawryglyn in EM, a bucolic part of the Cambrian Railway somewhere near Machynlleth. 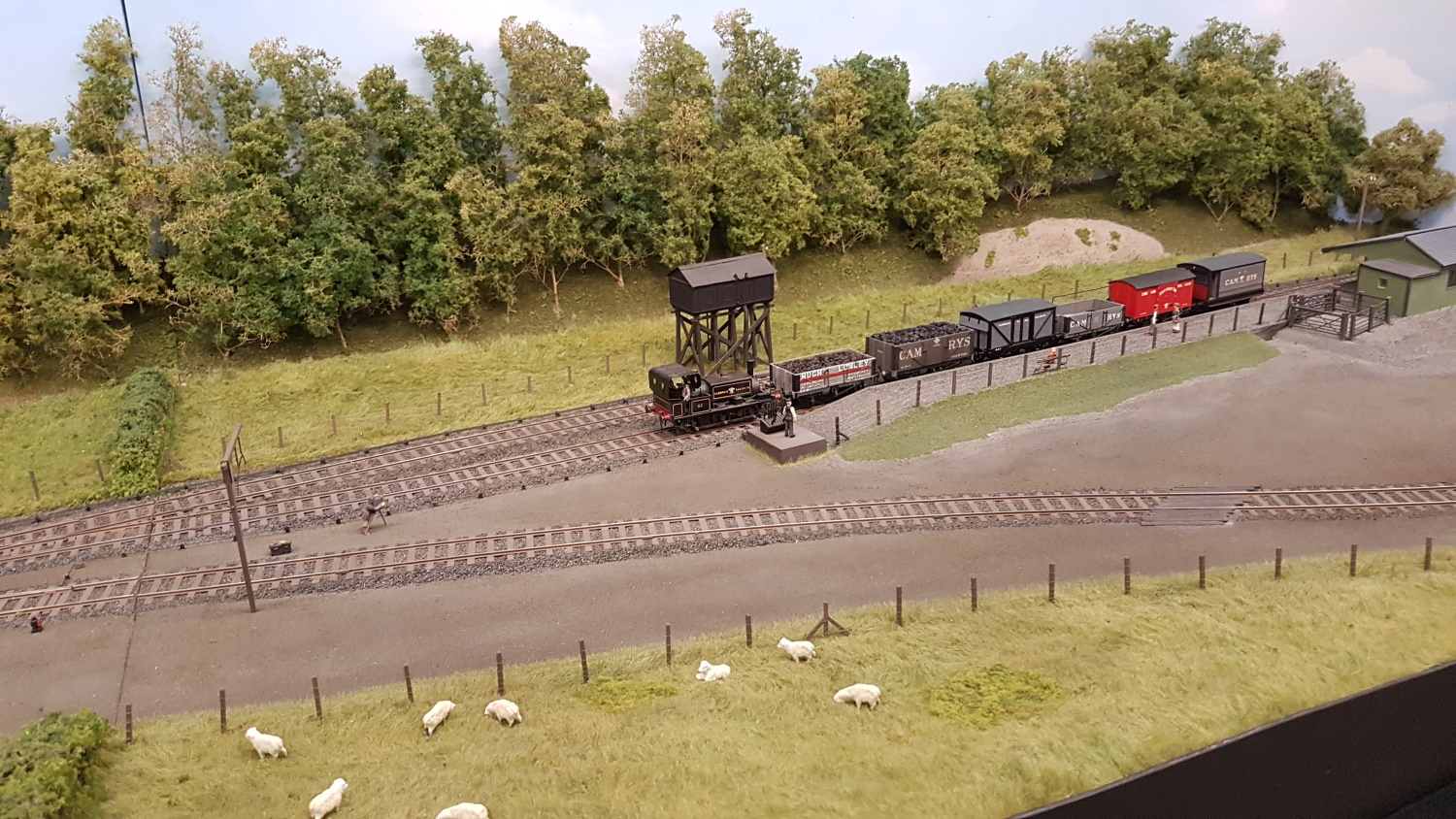 A less bucolic part of Wales is shown in Llandowdno (00), somewhere in north Wales in BR days and close to closure. 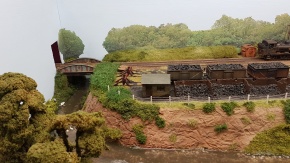 Finally for today, Horsethief Bridge in ‘N’.  American modelling at its best – and simplest – with long trains travelling very slowly at scale speeds through the countryside.  It took about five minutes for a train to travel from one end of the layout to the other – it’s a big layout, but that’s still a crawl!

Posted in Exhibitions, Inspiration, Out and about | Tagged exhibition, inspiration, model railway | 2 Comments

Posted on October 16, 2021 by snitchthebudgie

Michael and I continued to build his layout on Wednesday.  Well, I did most of it, as I was giving instructions in how to wire it up, and use a soldering iron – and how to melt the plastic on Peco track.  I also found that I’d forgotten to add insulating fishplates at one location, but we managed to extract that piece of track and change fishplates.

And at the end of the session, we had a locomotive running around the main line and into every siding.  Next job, perhaps a little ballasting?

Reading RMweb recently, there was a thread exploring a slightly expanded version of Ian Futer’s ‘Victoria Park.’  I quite like the addition of a central siding between the platform roads.

I recently gave in and bought a cheap copy of the ‘Book of the T9.’  Here are four photos of that long lived and lovely locomotive… 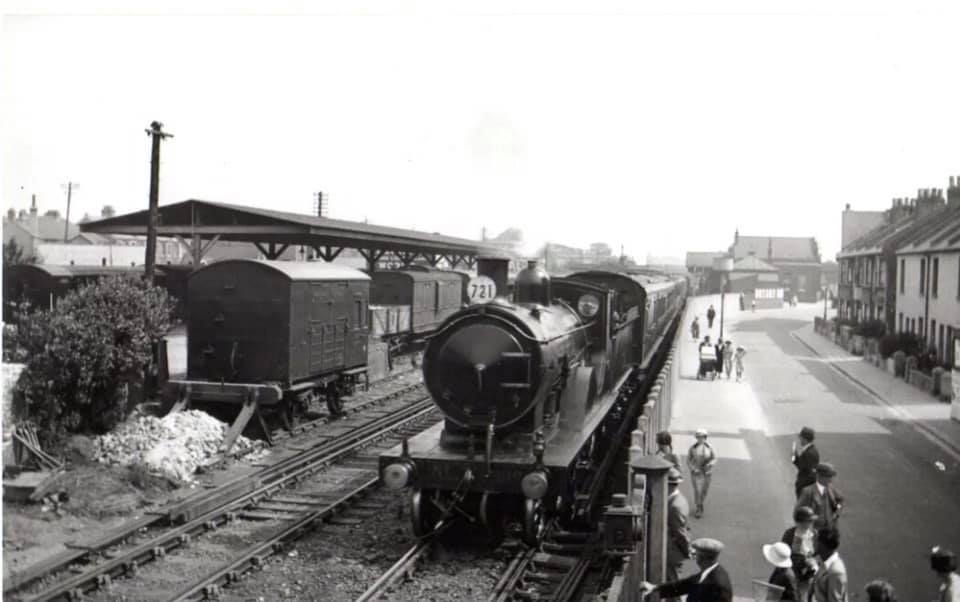 Posted on October 14, 2021 by snitchthebudgie

Last day of the holidays…..

An overcast day. This morning we took the boat from Interlaken to Brienz. Was thinking of taking train to the Rothorn but the train was full and 90 minutes wait for next one and the low cloud changed my mind. Instead took train back to Interlaken to do some shopping. Two of the group were taking a paragliding trip so the rest of us met up to watch them land. After a group drink came back to hotel to start packing. Will not be doing emails tomorrow as we leave tomorrow on 6.18am local time (5.18 UK time) arriving in St Pancras at 6.33pm.

We start at Kleine Schiedegg 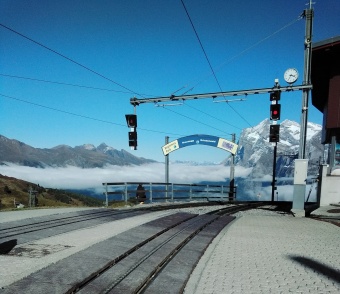 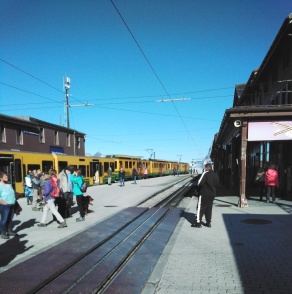 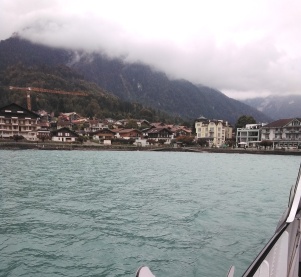 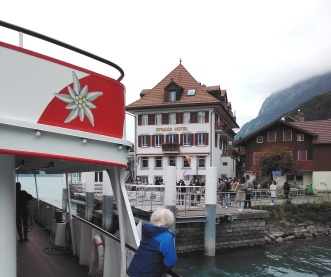 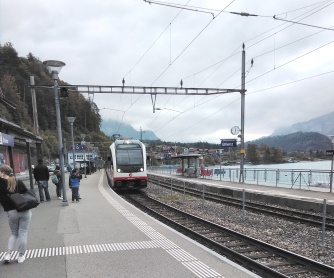 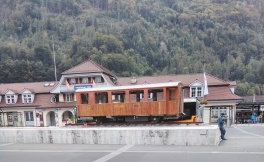 And the last message from Ron….

Did not know the concrete cows had emigrated from Milton Keynes

Thanks, Ron, as ever, for sharing some interesting photographs – I think concrete cows is a first from the Dawes school of snaps!  I suppose I’ll have to think up something original to write for the next blog.  I hope to get to Uckfield exhibition over the weekend, so should have some pictures to share.

Posted in ESNG, Out and about, Prototype | Tagged ESNG, prototype, railway, Switzerland | Leave a comment

Posted on October 13, 2021 by snitchthebudgie

Highlight of the trip a visit to Jungfraujoch. Came up through cloud and can now see mountains rising ftom the clouds 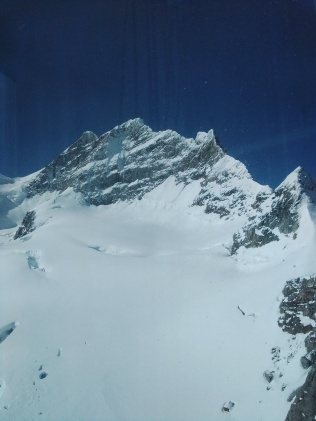 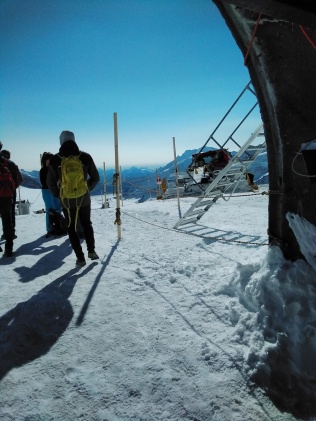 One more day to go, with some trains….