Posted on November 9, 2014 by snitchthebudgie

Despite the terrible traffic – everyone was on the roads this morning – I got to Tolworth Showtrain today.  It was of its usual high standard and there were a number of layouts that provided a certain amount of inspiration.  My only criticism of the show was that some parts of the halls were poorly lit – it was difficult to see some layouts at their best, and my photos are mostly of those with their own lighting.

As ever, there was also plenty of trade to tempt the unwary.  And I did very well and didn’t buy anything at all….

Of course, star of the show was the enormous 2mm finescale ‘Fenhouses, described on one advert as:

This exquisite 2mm Finescale model depicts 1¼ scale miles of railway in County Durham, including a tall viaduct. The layout is some 40 feet long and this will be the first time it has been shown in Southern England.

My photographs of the layout and a few comments are appended below.  I’ll do a second post with a few other layouts that impressed me.  The first thing that strikes you with Fencehouses is the sheer size of 40 foot of finescale 2mm.  Below are the yard sidings and a general view of the station itself.

Then you look a little closer, and realise just how good and detailed the modelling is.  Below are the level crossing, the colliery buildings, and the distinctive North Eastern Railway over track signal cabin.  Whilst I was there, most trains running were of British Railways green diesel vintage.  They can take the layout back into steam days, but for a two day exhibition, a lot of the donkey work was being done by Farish diesels converted to finescale standards.

Two miles north of Fence Houses is Victoria viaduct, some 800 feet long and 135 feet high. Built between 1836-1838, it is today a listed structure.  The model captures the pure bulk of the thing, and it is an ideal spot for a little trainspotting, as long passenger and coal trains trundle across it at realistic scale speeds (no bullet trains here!)

And as for staging – how about this?  Note the colour lights over the loops to aid the operators, and a ‘Deltic’ about to appear onto the public side of the layout. 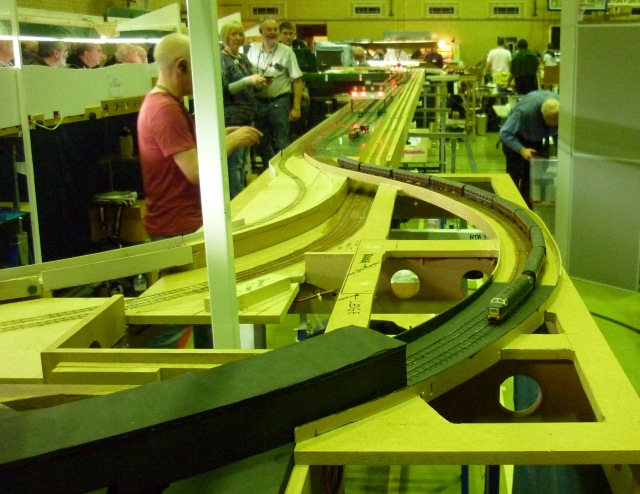 In the end, what makes this layout special is the finescale track.  It’s difficult to see that the complex pointwork below is 2mm scale (especially when the trees and fences are also so very well modelled).  Having said that, it’s not so much the narrow clearances at point blades and frog that are noticeable, rather it’s the scale rail section.  With code 40 ‘N’ gauge track now available commercially, and most modern stock will run on it OK, it would be possible to get close to this in ‘N’ gauge.

Secretary of the East Surrey N Gauge railway club
View all posts by snitchthebudgie →
This entry was posted in Inspiration, Layout design, Out and about and tagged 2mm Association, exhibition, model railway, N gauge. Bookmark the permalink.