Posted on November 11, 2014 by snitchthebudgie

Having recovered from Fencehouses, here are a few more photos from Tolworth Showtrain – a few more layouts that caught my eye.

First, ‘Cornwallis Yard’, a GWR layout with a little SR thrown in.  With my south London upbringing, and my interest in the Great Eastern I think the natural place for a railway is on top of a brick (or concrete) viaduct.  If it’s a goods yard on top of the viaduct, so much the better!  Here I liked the high and low-level yards, the multiple bridges hiding the exit from the layout to the left, and the nicely modelled buildings.

Whilst talking about trains on viaducts, ‘Blackfriars Bridge’ is a work in progress, modelling that London terminus around 1900 (or perhaps a little before).  A peek over the wall into the fiddle yard revealed some very interesting early rolling stock.

ESNG members of a certain vintage will remember Dave Bran’s N-mod module of Cromford, on the Cromford and High Peak mineral line.  There was a tidy ‘N’ gauge version of the same prototype on display.

I’ll have to include Maloja for the ESNG Swiss fans.  A few years back, there would be some novelty to a Swiss railway (just as there would be for a Japanese one, and other less well known prototypes.)  But as our knowledge of the more unusual prototypes improves, you can’t just get away with novelty at a show – and the standard of modelling seems to get better and better (even on the Thomas and friends layout….)

And finally, the American room had a nice spread of USA modelling – from ‘Z’ to ‘HO’, standard and narrow gauge, but the lighting was appalling! 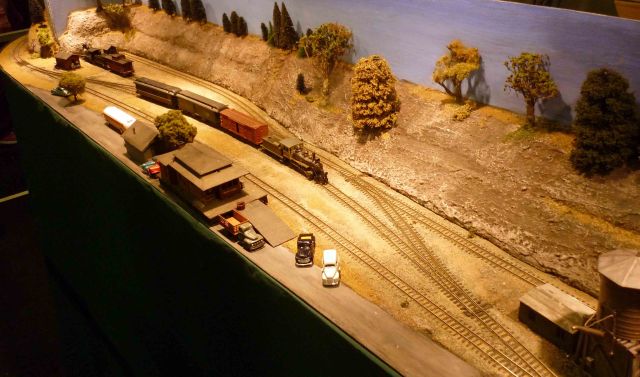 Secretary of the East Surrey N Gauge railway club
View all posts by snitchthebudgie →
This entry was posted in Inspiration, Layout design, Out and about and tagged 2mm Association, exhibition, model railway, N gauge. Bookmark the permalink.