Posted on January 7, 2015 by snitchthebudgie

The beginning of the present day railway network in Hong Kong goes back over one hundred years. The idea of connecting Hong Kong and China with a railway was first proposed in 1864. But it took a further 30 years before the idea of building a railway from Hong Kong to China was given serious consideration, and the single track line from Kowloon to the Chinese border opened on Saturday, 1 October 1910, and the Chinese Section opened in 1911.

Little changed up until the Second World War, with the commercial success of the railway being closely linked to events in China. The railway was operated by the Japanese after the fall of Hong Kong, and then returned to the British after the war. As with railways worldwide, the line had been seriously run-down and it took time to restore it to an efficient carrier.

Through-train passenger services to China stopped on 14 October 1949, the day prior to the capture of Canton by the Communists. Passengers and goods then had to be transhipped at the border. In 1951 agreement was reached with the Chinese authorities for goods wagons to again cross the border, but passenger services continued to terminate at the border at Lo Wu station.

During the 1960’s the decision was made to move the Kowloon terminus from its iconic location at the Tsim Sha Tsui Star Ferry in Kowloon a mile east to Hung Hom. This was necessary to permit construction of the first cross harbour road tunnel, and to overcome constraints on rail traffic growth. The Hung Hom Terminus complex was completed and opened in November 1975, and the Tsim Sha Tsui Terminus closed and demolished except for the clock tower, which remains a landmark today.

Parallel to this development came the Mass Transit Railway. Construction of the MTR was a response to growing road congestion in the late 1960’s. The first line opened in 1979.  And this was about where I came in in 1981, when the system looked like this, with a diesel powered main KCR line, and the first MTR lines open to Tsuen Wan and Choi Hung.

With the development and urbanisation of the New Territories, the British Section of the KCR became an important corridor to connect the new towns in eastern New Territories with urban Kowloon. Electrification and conversion to a dual-track system was completed in 1984. Since then, the suburban rail became much more metro-like (there is now often only 2-3 minutes between trains).  In 1991 when I again lived in Hong Kong for a year, the system had grown a bit more. 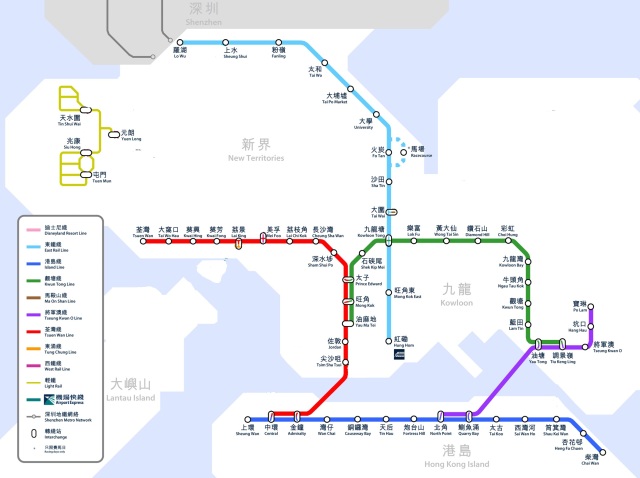 Development of lines by both the KCR and the MTR continued, with new MTR lines and a light rail system in the north-western New Territories (around new towns that I was involved in building.) And with the opening of the new airport on Lantau Island, a new railway link was added.  In 2006, the government, as the sole shareholder of the KCRC, decided that the two railway networks should be merged with the MTR being granted a service concession to operate the KCR network for an initial period of 50 years. And new lines carried on being built. As I return in 2014, the system looks more like this, with a direct service to DisneyWorld (!!) amongst others. 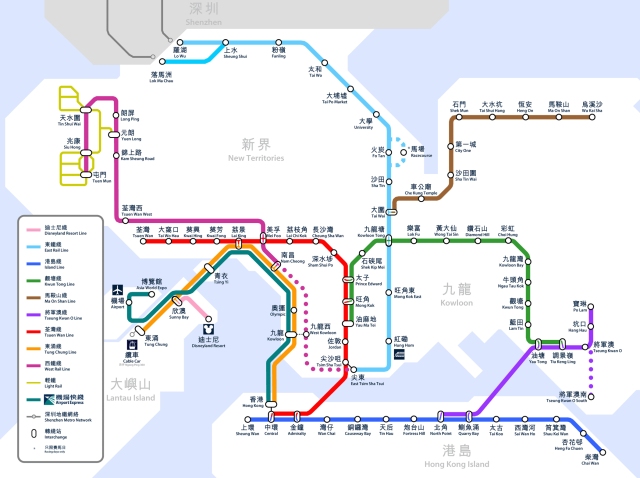 And it doesn’t stop.  This diagram shows some of the planned extensions to services.  The first, already under way, is a high speed rail link from Kowloon into China, to link into China’s extensive high-speed network.

Surely there can’t be room for any more railways?