Back in Hong Kong for a week, but despite having a weekend here before starting work, I haven’t got around that much.  The temperature is a pleasant 23-26C, but 85% humidity makes walking around like wading through soup (not that I know what that’s like….)  There’s a bit of light rain mixed in, and thunderstorms and rain are forecast this week.  OK, it’s typical HK spring weather when there is a maritime airstream hitting the coast.

So Saturday was spent pottering around locally, and resting.  Sunday, I took the MTR train down to Kowloon for church at St Andrews, then had lunch with three old friends.  Did I really first meet Peter 35 years ago, and Tim and Usha 31?  When I first met Tim he was a junior government lawyer – and now he’s a High Court judge!

After lunch I strolled through Tsim Tsa Tsui to the main heavy rail terminus at Hung Hom.  On the way, I took these photos of Hong Kong Island, across the harbour.  I think the weather is self-explanitory!

Hung Hom itself is undergoing considerable rebuilding (like the rest of HK, nothing stays built for long) to take in the new rail lines planned.  I had hoped for a photograph or two of the China cross-border express train, but these were well hidden behind the immigration areas.  So I dropped down to the heavy rail platforms.  I had a choice.  I could take East Rail up to Kowloon Tong and change onto the Choi Hung MTR line and back to the hotel….

Or I could try out West Rail out into the New Territories to Yuen Long, Tin Shui Wai and Tuen Mun…..

West Rail it was.  Interestingly, these two trains leave the station in opposite directions.  East Rail goes north(!), but West Rail indeed goes west.  Hung Hom has become a double ended terminus as there are no through services.  No photos of West Rail, I’m afraid, as it was difficult to get any shots out of the tinted windows.  But the train took me through some of my old (and new) engineering projects – Yuen Long, where I am looking at flood defence, Tin Shui Wai where back in the 1980’s I carried out all the preliminary design for the new river channels and the urban drainage, and Tuen Mun, where the station is built along and over a river, and I looked at the flooding impact of the station on the river.

The aerial photgraph below shows Tin Shui Wai new town in its first phase – the development is larger and more mature now.   The site is on an extensive area of fishponds, and during construction, the site office offered the best lunch for miles around (except the all-day breakfast at Fanling police barracks) – fresh duck, fish and lotus plant as vegetable of the day. Yuen Long is the town in the background, and West Rail passes through the ‘right’ or south of both towns. 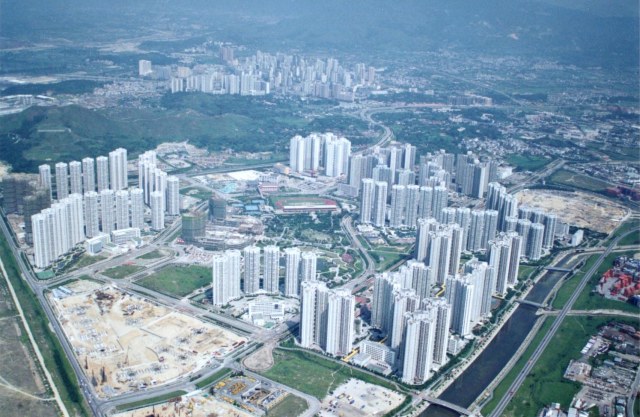 Having got to Tuen Mun, I got back on the same train for the return journey.  But instead of going back to Hung Hom, I changed from West Rail to the Tsuen Wan MTR at Mei Foo (quite a walk between trains), then just across the platform at Prince Edward to get back on the Choi Hung line and back to the hotel.

I was back in my hotel room, for a welcome bottle of water at about 5pm.  It’s been a pleasant afternoon exploring HK’s railways, old and new.