We don’t quite fit

Posted on August 31, 2015 by snitchthebudgie

Another scenic cameo to add to the layout.  Of course, strictly, one shouldn’t be running trains over the bridge with a vehicle stuck underneath it.  A more spectacular version would be a standard London bus, swiftly converted for open-top duties.  This seems to happen more often than it should, most recently on a tree.  A tree??  They don’t make buses like they used to….. 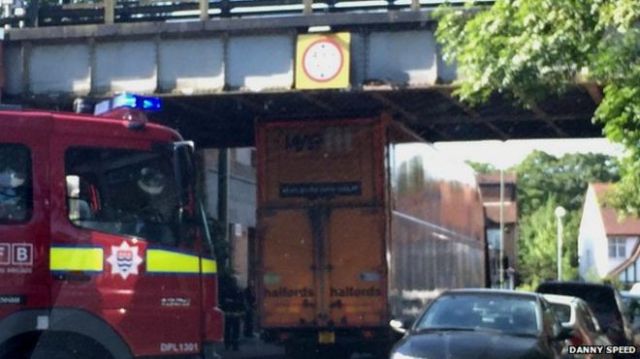 However, the fun bit of the story was the name of the company involved.  The BBC takes up the story…..

A Halfords “We Fit” lorry got stuck under a bridge, causing train services to be suspended.  The vehicle became wedged under the railway bridge in Upper Elmers End Road in Beckenham in south-east London.

Southeastern services were stopped between Elmers End and West Wickham for about an hour until about 10:30 BST on Saturday.

However, these ‘We Fit’ drivers seem creatures of habit, and rather slow on the uptake…

Last October another Halfords ‘We Fit’ lorry became trapped under a bridge less than a mile away.

Train services were also suspended on that occasion after the truck was jammed under the crossing in South Eden Road.

‘We fit’ indeed!  Once again real life is stranger than anything one could imagine.  Article from here.

And if you want to avoid the London Tube strike – or add another little something to your layout – how about this…..

Secretary of the East Surrey N Gauge railway club
View all posts by snitchthebudgie →
This entry was posted in Hints and tips, Inspiration, Out and about, Weird and wonderful and tagged hints and tips, inspiration, layout design, model railway. Bookmark the permalink.