Posted on November 21, 2015 by snitchthebudgie

Last but not least, a quick look at some of the British layouts on display at Tolworth.  Best of them was the large Old Elms Road layout.  Set somewhere near Reading, it has a mixture of BR Western and Southern Region services.  The 2 branch lines include a Southern Region 3rd rail electrified line.  This sort of railway takes me back to my childhood, and there were some interesting models on show.  The Maunsell W class 2-6-4 tank engine, shown on the turntable below, was designed for cross-London goods services, and is yet another favourite of mine.  Not a good looking locomotive, but one with a lot of character.  The top picture shows the moving buses on the road next to the station.  I’m not a GWR fan, but their early railcars were interesting designs, and I think they looked far better in DMU green or carmine and cream, rather than chocolate and cream.  (Heretic statement….  no-one expects the GWR inquisition….)

With a number of good ready-to-run models of Southern EMUs, and more kits, available, Southern 3rd rail layouts are becoming more common.  I’m delighted to see this, as I grew up deep in Southern Electric land.  Ashington is situated somewhere on the Sussex coast, as evidenced by the collection of Southdown buses in their classic livery on the road bridge.  Another attractive model of a workaday prototype. 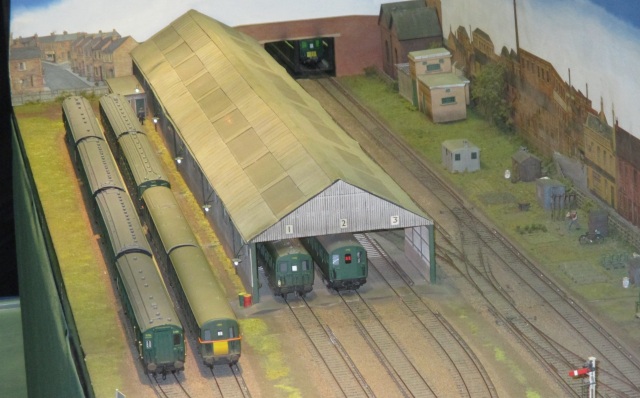 The British (often GWR) branch line terminus has become a bit of a cliché in UK modelling.  However, a small terminus does make a good model for a small home, and if you are starting out in the hobby, it may not need many points.  What is forgotten is the fact that many of the smaller London termini were built on sites smaller than many sprawling branch lines stations.  Tolworth had a good selection of such layouts, all worth a look.  Below are Woodstowe, Brixcombe, Bodmin North (an early P4 layout still going strong), one I can’t quite place but it had excellent diesel sound, and Oldshaw.

My apologies to those layouts not illustrated over the past 3 posts.  They were good, too, but this has, as ever, been the editor’s choice.

After Tolworth, Derek and I moved on to the toy fair at the nearby Sandown Park.  It was fun walking round working out what my childhood toys would have been worth if I hadn’t wrecked them.  But Derek found nothing in the way of trains, and I couldn’t sell the box of Meccano I’d hoped to offload to some gullible collector!