Pacers: The train that the UK has struggled to get rid of

Posted on March 9, 2016 by snitchthebudgie

An observation about railway modellers is that we are not very good at modelling the ordinary.  It takes a lot of discipline to keep your model making or buying to a specific era or discipline, rather than apply “Rule 1” (it’s my railway and I’ll run what I like.)

How many ‘Deltic’ prototypes are out there, probably because of it’s rather fetching blue livery?  And probably pulling a train of nuclear flask wagons….  Hornby found a ready market for the unique 71000, ‘Duke of Gloucester’ – perhaps as it was such a lovely locomotive, and a ‘might-have-been’ if BR had stayed with steam.  There are plenty of models of obscure BR diesels, whilst some more common machines are not found in the shops.

Perhaps this explains the ‘Pacer.’  Abhorred by the travelling public, but it makes an excellent model.  I think there is a good one in ‘OO’, but it hasn’t got to ‘N’ yet.

The BBC has an interesting article on the Pacers up at the moment.

Moves are finally afoot to get rid of much-maligned trains built from the body of a bus. But how did Britain’s railways come to rely on the Pacer?  There’s the rattling, the shuddering, the bouncing and the occasional squealing. You don’t have to be a trainspotter to know you’re riding a Pacer.

Essentially, each one is an old Leyland Motors bus frame mounted on train wheels and, thanks to the vehicle’s rudimentary suspension, regular travellers are all too familiar with the distinctive sounds and sensations.  “They’re quite bumpy,” says Emma Potter of Dawlish, Devon, as the Exeter-to-Exmouth service clatters around her. Then there’s the white noise. “It’s constantly like having a hairdryer blowing in your ear all the time.”

Pacers, built between 1980 and 1987, are one of the UK rail network’s more enduring curiosities – a Heath Robinson-esque relic of the British Rail era.

And it’s the Heath Robinson touch that so attracts railway modellers.  I did enjoy the articles description of attempts to export the Pacer:

There were attempts to export them to overseas markets. A Class 142 demonstration unit was taken to the US and Canada in an attempt to attract orders. None were forthcoming. Another Pacer travelled to Belgium and Sweden, with the same result.

According to one account, a two-car set was dispatched to Thailand, and then on to Malaysia and Indonesia, after which its whereabouts became unclear.

Most of the Class 141s were, however, sold second-hand to the Islamic Republic of Iran, where they served Tehran’s suburban lines.

No wonder Middle-East diplomacy is difficult.  Perhaps we should drop a few on Syria? Yet they do have their supporters….

Pacers do, however, have their enthusiasts. There exists a Pacer Preservation Society that campaigns for units to be maintained on heritage railways. The BBC made multiple efforts to contact the society to no avail.

There is a case to be made in their defence. Pacers have a fairly good safety record. They are also credited with saving rural lines that might otherwise have been closed if only more expensive rolling stock had been available.  And not everyone minds the bumps and rattling. As she waits at Exmouth station for the Pacer due to take her to Exeter, Eileen Mockford, 81, says they do the job perfectly adequately.  “They are very useful because they are very quick and they are always on time,” she adds. “You can rely on the fact that they get you somewhere on time.” 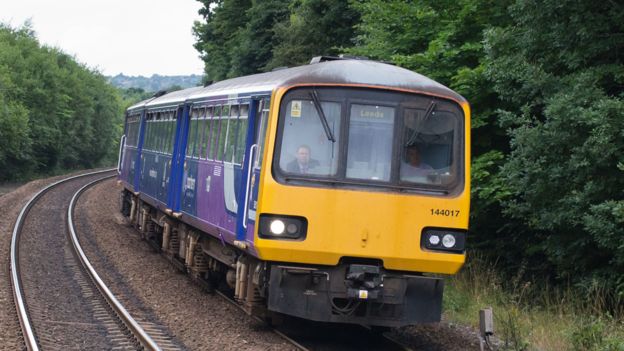 Secretary of the East Surrey N Gauge railway club
View all posts by snitchthebudgie →
This entry was posted in Inspiration, Out and about, Prototype, Weird and wonderful and tagged inspiration, prototype, railway. Bookmark the permalink.