There was a fair turn out on Wednesday.  The treasurer had recovered from his close encounter of a hatch-back kind.  But the chairman had gone down with a nasty stomach and didn’t risk the journey south to Earlswood.

We ran trains, but the main interest was a little retail therapy.  Derek brought around a good amount of Martin’s trains and books for the members to look at an hopefully buy.  A number of us found a little something.  I couldn’t resist another Farish 4-CEP and a Blue Pullman, plus a Dapol Hymek.  All as new.  I rounded up the cost with a book…..

There were some lovely models on display, especially Martin’s collection of continental coaches, including some Orient Express Pullmans.

I was a little bewildered to find this book in my box of items put aside by Derek.  I recalled having a copy of this in the house as I was growing up.  Then Derek pointed out the inside cover – he had passed it on to me as it had the name Bartlett inside.  But this WAS the copy I had grown up with, and it was my father’s signature.  I can’t remember how Martin got this book.  I might have given it to him as it included a picture he was interested in.  Or perhaps I had donated it to a trader or charity shop, Martin had bought it, and it had winged its way home.  I suppose I’ll have to keep it now…… 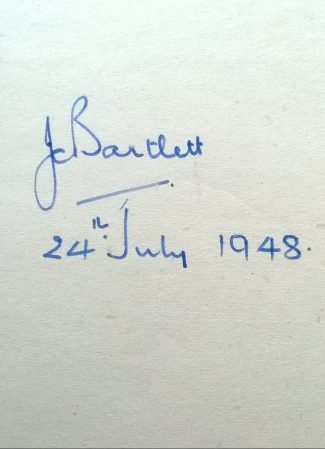