Posted on August 30, 2016 by snitchthebudgie

No idea what to do with your children’s baby toys – try this, at least with the bath toys! 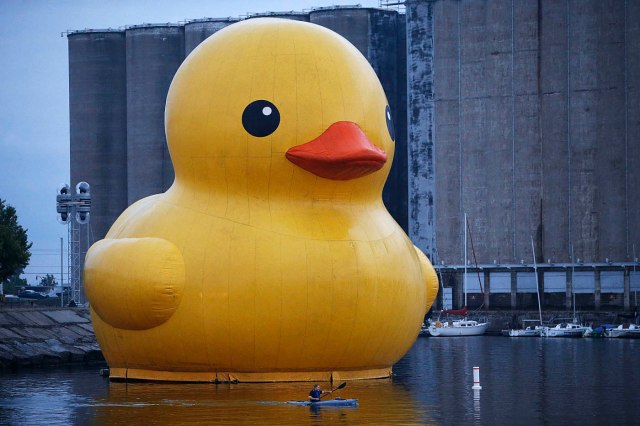 A kayaker passes the world’s largest rubber duck as it floats in the Buffalo River near Canalside, Friday, Aug. 26, 2016. (Derek Gee/Buffalo News)

I have no other details except for the caption, and frankly, I’m too scared to ask…..

Following on from politicians in your carriages, how about an overcrowded commuter service (modern image modellers only, please)?

The BBC reported on ‘How many people have to stand on trains.’  However, it is rarely reported by those who want to re-Nationalise the railways, that much of the overcrowding is due to the success of the railways.

“Of course some trains are overcrowded, but that’s because we’ve doubled passenger numbers since privatisation and they travel on thousands more services,” says Nigel Harris, editor of Rail Magazine.

“It’s part of the price we pay for a walk-up railway. The alternative is reservation only or you don’t travel – which is often the case on the European railways, which critics often say are so much better than ours. They aren’t!”

There were nearly 1.7 billion British train journeys last year. That’s more than twice the number in 1994-95. A Victorian network, starved of funds for decades, was never going to be able to cope with that kind of rise.

It might also require considerable investment to fill our model carriages as below!

This is a just amazing.  I picked up the original video in the daily papers, but there are a number on YouTube, including some longer clips.

I wish I could build my layout this quick….

Secretary of the East Surrey N Gauge railway club
View all posts by snitchthebudgie →
This entry was posted in Hints and tips, Inspiration, Out and about, Weird and wonderful and tagged hints and tips, inspiration, layout design, model railway. Bookmark the permalink.