Posted on November 22, 2016 by snitchthebudgie

The third post, a long way behind the traction ones, is about small, switching layouts.

Another interesting voice in the layout design world is Lance Mindheim, who most originally posts at http://www.lancemindheim.com/.

He has built a number of very interesting layouts.  The first was a 20×20 foot N gauge layout of the Chicago, Indianapolis and Louisville or as it’s usually known, the Monon in Indiana in 1955.

He then moved to modelling modern-day Miami in HO.  The small East Rail was a 10×10 foot L-shaped switching layout.  Simple, but lots of operation. 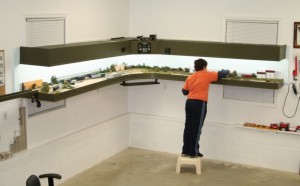 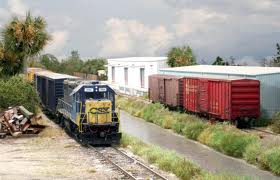 The room-sized Downtown Spur occupies the full 20×20 foot of the railway room.  It is wonderful modelling, and a couple of photographs in a recent Model Railroader article really could have been the real thing. 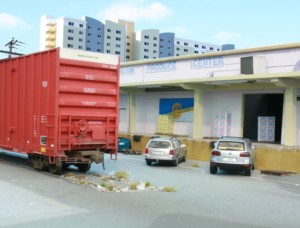 So, what are the design points we can learn from Lance’s brilliant modelling?

Lance’s blog includes a number of deceptively simple switching layouts.  But if operated as the prototype, even a couple of sidings can offer an hour or two’s instant entertainment.

Lance Mindheim continues to build small switching layouts.  His latest is an HO model of the Los Angeles Junction Railway.  Read about it here.  It’s another L-shaped plan, and as with his earlier work perfectly captures the run down modern freight branch.  Only two points, but plenty of operation.

Lance describes the ethos of his plan…..

As we zero in our target of planning a layout that meets our personal interests, consideration needs to be given to that subtle component called time.  Time, in all its aspects, plays a dominant role in whether we are blissfully content or miss the mark.

So, to answer everybody’s questions, no the LAJ layout isn’t a test bed but rather the result of my answers to the above questions.  I want a highly detailed urban layout.   I want to fulfill my lifelong interest in finally modeling at least a portion of the LAJ.  I want a design that can sustain thirty to forty-five-minute op. sessions (but really doesn’t need to sustain anything longer). My available hobby time isn’t what it used to be and I need to factor that in if I’d like the layout to be mostly complete in the next eighteen months.   When I pick up my throttle I want to feel transported to the dry heat of LA and run under the palms and past iconic art deco structures.  That’s what I’m up to.

And would you believe this is a model?