Posted on November 24, 2016 by snitchthebudgie

Last week, ESNG completed its annual pilgrimage to the Stuttgart N-Club meet and show.  I went for the full four days this year, for the first time.  My impressions of the whole thing – four days is great fun, but not twice as good as two days (work that one out if you can) – and that the full show is exhausting.  I did very little on Monday, the day after I got back.  A model railway show doesn’t seem hard work, but you’re always active, operating and just putting things back on the track.

We also had plenty of discussions as to ESNG’s direction, but more of that another time.

Of course, one benefit of spending four days in Stuttgart was the chance to take a train down town, and see the town centre for the first time in seven years!  So we’ll start this year’s review with a few photographs of the real thing.  The views from the observation platform on the top of  the station tower are excellent – despite the rain. 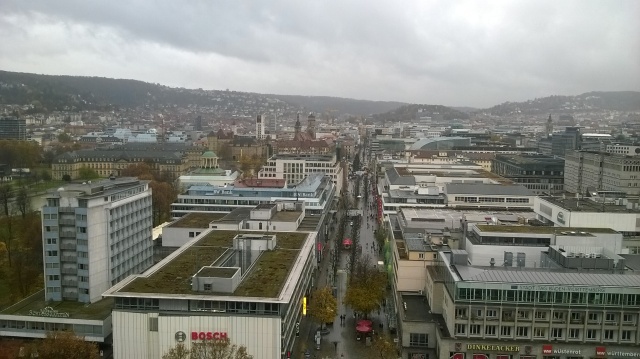 The station roof is in the foreground, and the temporary platform access is to the right. 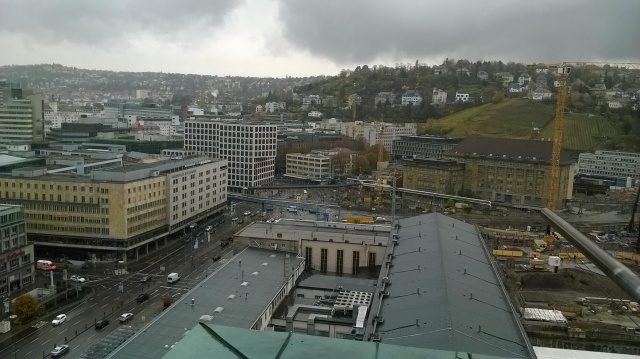 All this station area shown here, leading off to the carriage and loco yards in the far centre distance are being abandoned and redeveloped.  Trains will still run through this location though.  The station is being rebuilt underground and at 90 degrees to the existing station, so that through trains will not have to reverse when they stop at Stuttgart.  The magnitude of the project is gigantic, and will free up great areas for development and park land through the crowded river valley.  Perhaps we should have done something similar at London Bridge?  But the planning enquiries would have gone on for ever….. 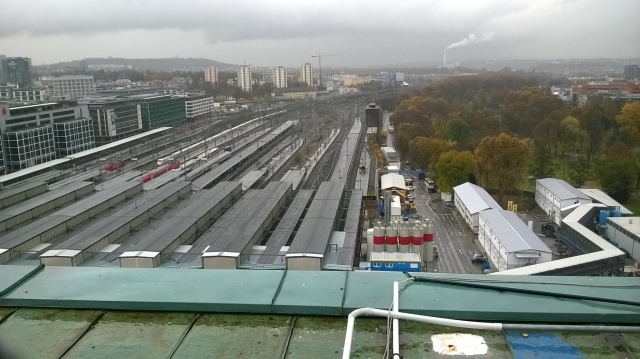 In the Stuttgart show there was part of a model of the Stuttgart station as it was 20 years ago.  The owner had been building the layout for 30 years or so, and had recently died, leaving his layout to the Stuttgart club.  They managed to get part of the layout out of its room into the Messe for its first public showing ever. 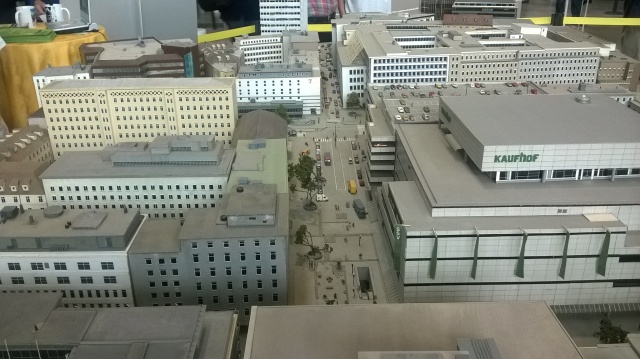 All the good sidings and sheds in the background below have already been redeveloped – look at the trainspotter’s photographs that follow. 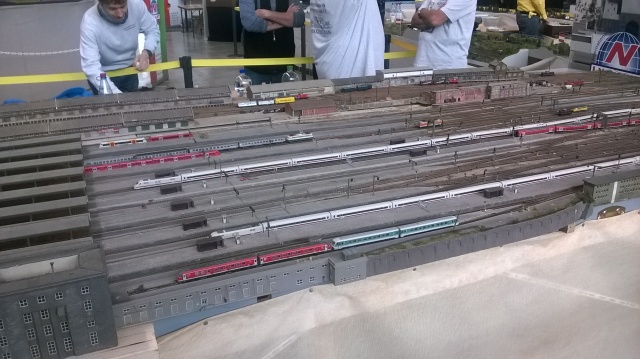 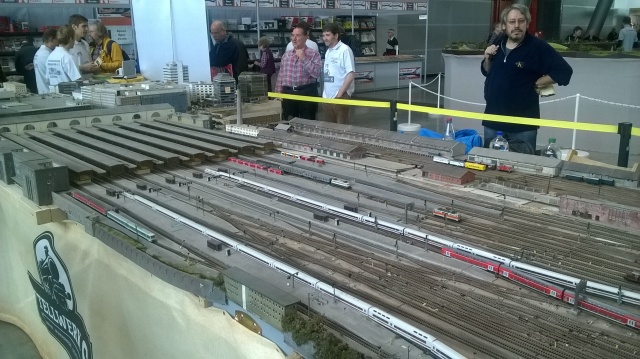 Meanwhile, back in the station, Allan, Derek and I went and stood on the end of the platform to watch the trains.  Plenty of movement to see, though being a Saturday, it wasn’t worth a trip to another station to look for goods.

These first two photos, of the same scene, are interesting in how identical reds have come out differently in photographs taken within seconds of each other. 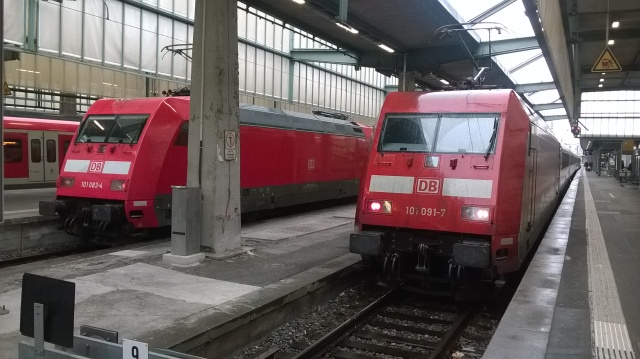 Push-pull sets waiting to depart.  Note the redevelopment in the background…. 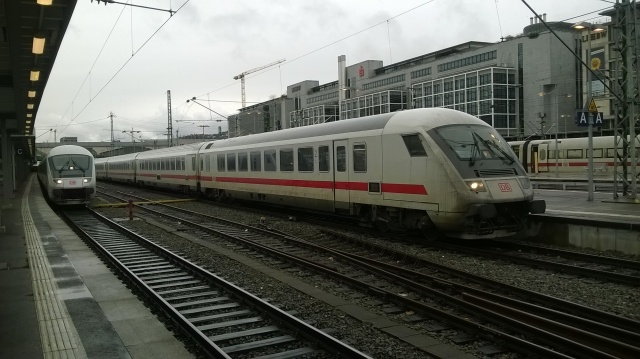 A former East German loco and double-deck stock.  Again, interesting to see how the red loco has faded in colour….. 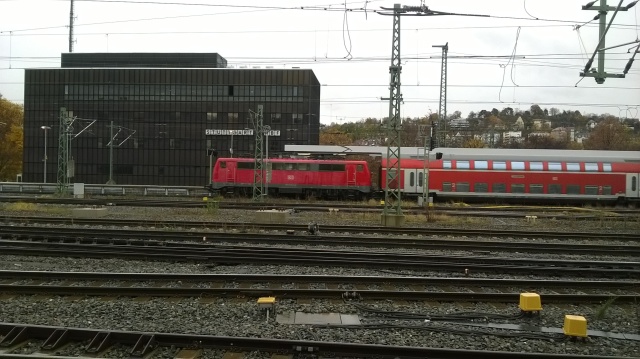 An ICE3 enters the platform…. 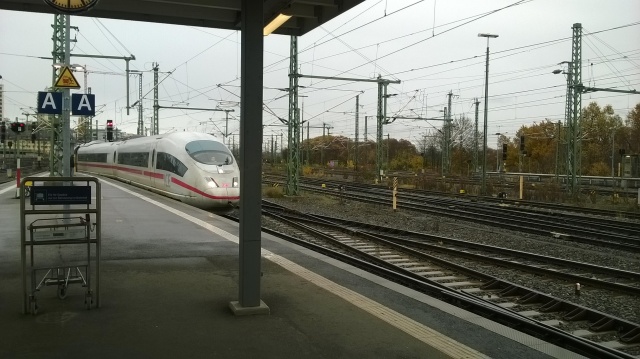 And an view of the link between units.  Just like Kato….. 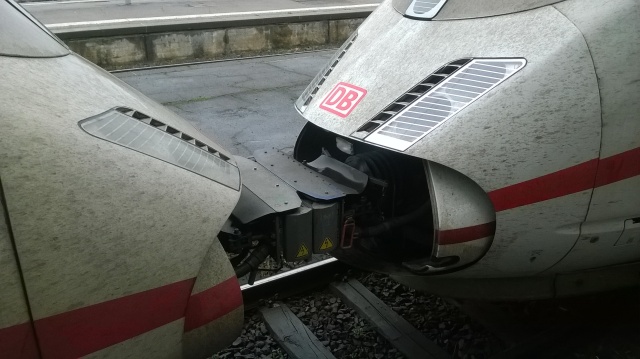