Posted on February 28, 2017 by snitchthebudgie

A few quotes from the February 1975 Modern Railways show that a lot can happen in 40 years, most of it beyond one’s wildest dreams.  From an article on the “London Rail Study”, a government appointed team looking at railways in and across London….

While some potential is seen in the reopening of the disused tunnel between Farringdon and Blackfriars, the transmission of delays between what are at present self-contained operating areas would be one unwelcome result.  Nevertheless, as a secondary priority, £10 million has been allowed for preparation of a through running scheme.

WRONG!  Thameslink has been one of the great transport successes of the last 20 years.  Wikipedia tells me that:

It opened as a through service in 1988 and by 1998 was severely overcrowded, carrying more than 28,000 passengers in the morning peak….

The Thameslink Programme is a major £5.5 billion scheme to extend the service to a further 100 stations and to greatly increase capacity on the central London section to accommodate more frequent and longer trains, scheduled for completion in 2018.

They did a little better with this one, but it took some time to get there….

Crossrail envisages the construction of two deep-level cross-London links to allow BR passengers to reach central London direct by linking Western Region and GE lines to the north and Southern Region routes to/from Victoria/London Bridge to the south.  There would be an interchange at Leicester Square.  Though very costly – in the region of £300 million – the benefits could be considerable and further feasibility studies on the practicabilities of such a scheme are strongly recommended.

Well, we have a link from Western Region to the GE lines and then into south-east London, opening December 2018, 43 years after this was written.  Must admit the “British Rail” and “region” dates it a bit – as does the £300 million.  Latest estimate is £15 billion.  Crossrail 2 – the rest of the links envisages above – may come by the 2030’s.

Finally, from that always interesting and usually wildly wrong section, the letters page….

Sir, I was very interested by Graham Robson’s article and especially his criticism of the investment by British Rail in HST and APT.  Although I disagree about the latter, which will represent a significant advance, I wholly endorse all he says regarding the HST.  Indeed he echoes sentiments I expressed in a letter published in September 1972.

Now that some HST sets have been ordered I suppose they will have to be used.  I would suggest, though, that the number be curtailed and that those which are delivered be allocated to specific prestige services on non-electrified lines – if necessary they could be called Pullmans – with supplementary fares.

VERY, VERY, WRONG!  The HST 125’s restored British Rail’s image at a time when train travel was suffering from a terrible image and low self-esteem.  Over the years, their distinctive outline has become a design icon (OK, so has the Honda 90 motorcycle, but you get the point.)  The fastest diesel trains in the world, they immediately introduced 100-125 mph services to the East Coast main line and the Western Region from Paddington.

They continued to provide Intercity services, gradually being filtered onto other main lines as electrification continued….

And then they were filtered further to secondary cross-country services and to a number of privatised operators…..

And even into departmental use…. 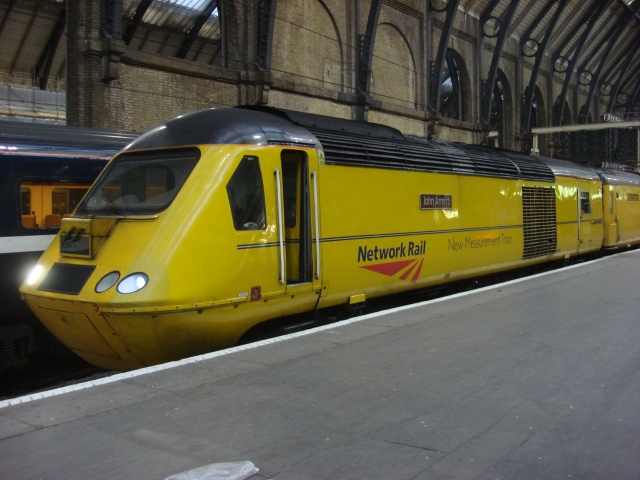 HST’s are expected to be phased out by the end of this decade, giving them 45 years of generally reliable high-speed service.  And I suspect that some units may last even longer on secondary routes!  It’s a good thing British Rail didn’t listen to the “experts”.  And don’t get me started on the APT!!!

Secretary of the East Surrey N Gauge railway club
View all posts by snitchthebudgie →
This entry was posted in Prototype, Weird and wonderful and tagged humour, prototype, railway, Southern Electric. Bookmark the permalink.

2 Responses to Hindsight is perfect….