Posted on September 5, 2017 by snitchthebudgie

Last Saturday, I visited ‘Old Oak Common 111’ that celebrated 111 years of the west London depot – once home to GWR steam locomotives – ahead of the demolition of part of the existing facility. It marked the introduction of electric trains from London Paddington and Intercity Express Programme trains in place of High Speed Trains.  The event website said that:

During the depot’s 111-year history, the depot and its dedicated, highly skilled staff have maintained everything from steam era Kings and Castles, to the diesel-powered Westerns and Warships. In 1976 the depot was the maintenance hub in the Western region for the newly introduced High Speed Trains, the iconic trains which changed the face of Intercity travel in the UK.

While the HST fleet still operates today it is soon to be replaced after over 40 years of service by the Hitachi Intercity Express Train, which will provide another step change in passenger experience.

I had visited Old Oak Common, frighteningly, 50 years ago, when it was full of Warships, Westerns, Class 47’s and the odd Hymek.  It was good to go back.  The line up below sums up travel on the Great Western lines.  From left to right, we have GWR steam railmotor No. 93, a King Class 4-6-0, a Manor Class 4-6-0, a Warship diesel hydraulic B0-Bo, a Western diesel hydraulic Co-Co, a Class 50 Co-Co, a HST power car (in original livery), a more modern Class 180 ‘Adelante’ DMU, and the new Hitachi EMU for GWR service.

Entering the depot, the first thing we saw was ‘Evening Star’, the Class 66 in a livery imitating the last steam locomotive built for British Railways.  It looked very smart, and I almost regretted not buying the N-gauge version – but it really isn’t my period.

I have always liked single unit railcars, like this Class 121, that would have worked in the Thames Valley.  The Class 121 is Britain’s longest serving DMU, operating in passenger service for 57 years until 2017. 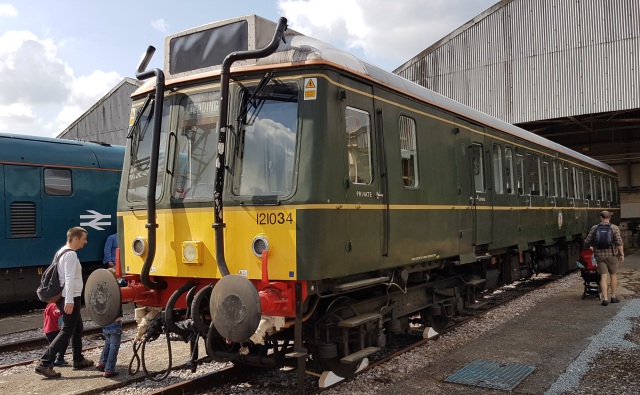 A definite highlight was the seven Class 50 locomotives on display.  Built at the end of steam in Britain, they were designed for the non-electrified sections of the West Coast main line, but ended their lives running on western rails.  Here are six of them, carrying most of the liveries seen over the 50 years of their existence.

A contrast of rail blue with a ‘high visibility’ Colas Class 56.

The Class 180 ‘Adelante’ DMU and the new Hitachi EMU.

Inside the heavy repair shop was this HST prototype power car.

And various bits of locomotives…. 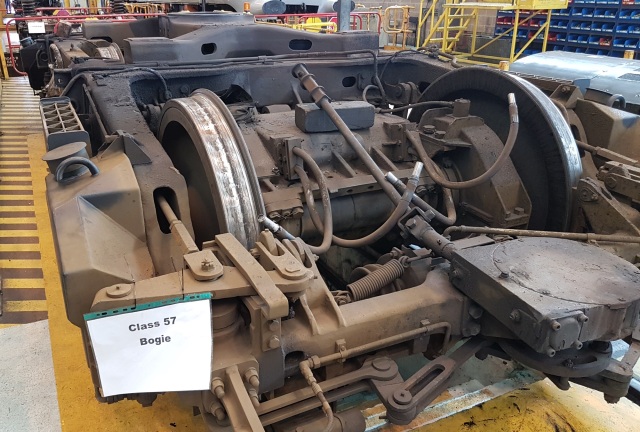 Outside was another HST power car, celebrating Old Oak Common as a centre for HST maintenance.

Next post, the steam locomotives on display, plus the other exhibits.

Secretary of the East Surrey N Gauge railway club
View all posts by snitchthebudgie →
This entry was posted in Exhibitions, Inspiration, Out and about, Prototype and tagged exhibition, inspiration, prototype, railway. Bookmark the permalink.