Posted on December 8, 2017 by snitchthebudgie

Before Ian and Lily joined us in Stuttgart, they were in Hong Kong and Japan.  Here are a few of Ian’s holiday snaps….

This one is very familiar to me – a Hong Kong ‘tram jam’.  Still the best value ride in the world (except perhaps the HK Star Ferry.)

On to Japan.  If only the Rev Awdry could have anticipated this!  A tourist railcar at Kawaguchiko station near Fuji 5 lakes, a sort of Japanese version of Windermere! 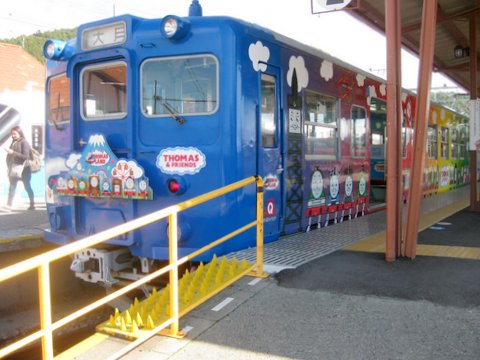 Also at Kawaguchiko.  The liveries may appear a bit garish/unusual/silly but they work – they are generating tourist traffic on otherwise unlikely lines.

This is a view through the cab of the train from Nagoya to Takayama – a diesel multiple unit.

This is not a railway porcupine but a gauging car – the mechanical version of the lasers we use today!

And a bonus modelling idea, courtesy of Storm Caroline, Scotrail and the BBC.  A railway track at Patterton was blocked by a trampoline ….