Posted on December 28, 2017 by snitchthebudgie

A little light reading after that heavy Christmas luncheon.  (I think mine is just wearing off….)

The BBC recently had two interesting articles on railway stations ‘worth lingering at’ – stations often with few trains, but lots of other interest.

The golden age of rail travel appears to be well and truly over, and stations lack the glamour formerly associated with letting the train take the strain. Often unmanned and usually unloved, they are places to hurry through.

Commuters on the daily grind tend to be grimly determined when leaving a train. Heads down, elbows out, it’s a fight to get to the exit. The only reason to pause is to grab a cardboard cup of something caffeinated before stalking out into the ice-spiked drizzle of a dark winter’s morning.

But what if your station wasn’t full of faceless coffee chains and people pushing? What if there was a station garden filled with fragrant shrubs, or an art gallery, or a top-notch local restaurant?

Here are some everyday railway stations with added extras you may wish to linger at – or even arrive early for.

Melton, on the line between Ipswich and Lowestoft, is one of the few railway stations with a butcher on site. The station itself opened in 1859, was closed in 1955, and reopened in 1984 following a local campaign.

Although there is a rail service, the station is unmanned – so there was a nice butcher-shaped space available for the purveyors of pork.  During the winter the Five Winds Farm shop specialises in local game, and the team have been national finalists in the awards known as “the Oscars of bacon.”

While most railway stations in England are places to scurry through on the way to get somewhere else, there are some which are worth lingering a little longer at. BBC News recently suggested some everyday stops that offer commuters a little more than hurrying hordes and characterless coffee shops. Here are some more, this time recommended by readers.

People wishing to linger at Cromford railway station in Derbyshire can do so overnight, as the waiting room is now a holiday cottage.  The stone building, with the original pitched roof, is situated on the now disused southbound platform.

It was used by Oasis on the cover for their 1995 single Some Might Say.  Lyrics include, “Cos I’ve been standing at the station/In need of education in the rain”, so take on board the advice from the Gallagher brothers and remember your deckchair, book and umbrella.

And now for something completely different:

A railway station in Angus is the least used in Great Britain, new figures have revealed.

Just 24 passengers travelled to or from Barry Links station in 2016/17, according to data published by the Office of Rail and Road (ORR.)  Only two ScotRail trains stop at the station, which is unstaffed and has no facilities, each day between Monday and Saturday.

The station, which opened in 1851, is located between Dundee and Carnoustie. 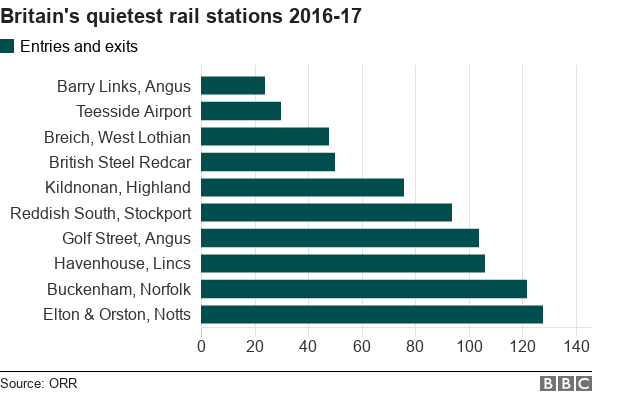 I’m just surprised there are no Southern stations included….

Secretary of the East Surrey N Gauge railway club
View all posts by snitchthebudgie →
This entry was posted in Hints and tips, Inspiration, Out and about, Prototype, Weird and wonderful and tagged Hints and tips, inspiration, Layout design, prototype. Bookmark the permalink.