And, just for a change, another Swiss holiday #2

Posted on July 4, 2018 by snitchthebudgie

A little more from Allan on their trip on the BRB (edited with Allan’s photos and added text that got lost first time around)….

Was just another day on the Breinze Rothorn Bahn.

On Monday had a wonderful trip up the Rothorn with locomotive No.12 doing all the work. We arrived and bought our ticket. We were greeted by the sight of two steam locomotives Nos 2 & 12. Was lucky enough to get on No 12’s train. This is the first time for quite a few years that we have had the pleasure of this locomotive.

We first met her on the day she was named and launched by the BRB some years ago. I was lucky to turn up on that day. Publicity for it was all over the Interlaken area, but I don’t think they were aware of how many people would turn up. One of the few times the Swiss didn’t get it right. Too many people, not enough trains and poor to no catering. It was all right if you were an envied guest.

Great trip up the Rothorn and even found their tree that they hang up all the lost baby dummys etc. After a break for a beer in a packed restaurant, we made our way back to the trains and again got on No.12’s train. We were talking with a couple about the loco on the trip up. By luck this was also our loco for the trip down….

It started as a normal run. On the way down we stopped and took water at the first passing loop with the help from the guard and the driver of an up train. This was unusual. After the up train passed, our train set off with locomotive No.12 and her train following. Also, one of their diesel locomotive and a waggon brought up the rear. Thought something was not right….

Just before the main passing and water stop (for the way up) we came to a stop. After a few minutes, we continued our descent after the three down trains had got into the loop. (Loco No 2 with its coach and diesel No. 8 with one waggon). Just before the main passing and water stop (for up trains) Planalp, we stopped and the driver got out and started to look inside the frame of the locomotive. By now the following two trains had stopped behind us. After a while we set off again. On reaching Planalp we entered the loop and stopped just into the loop. The following two trains went in the up road. The steamer took water as usual. It seemed that PW personal were turning up out of nowhere. We were asked by the Guard if we would like to get out but as there was very little shade we stayed in the coach. Sometime later we were asked to leave the coach as she said the loco is Kaput!!! Was told that they would be sending another locomotive up to take us down.

While this was going on the other steam loco had taken water and carried on down. The diesel and it’s one wagon had gone through the station and come back in to the loop in front our train. An up train came in and took water and carried on up. We were then entertained by the staff as they swapped over the locomotives.

As we sat at the station watching the going-ons, with everyone using their phone at times. Another up train came through the station. The guard bless her keep us well informed and kept apologizing. She said they were going to put the diesel on to the carriages so we could get back to Breinze.

We then set off nearly an hour later to finish the trip down to Breinze.

Another fun day on the BREINZE ROTHORN BAHN. 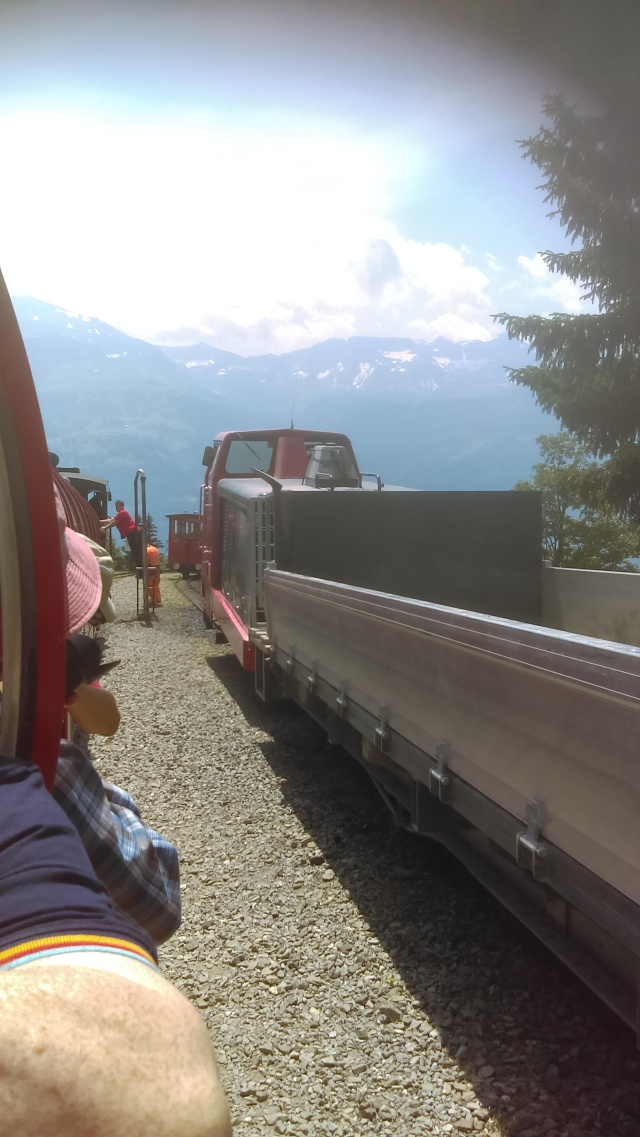 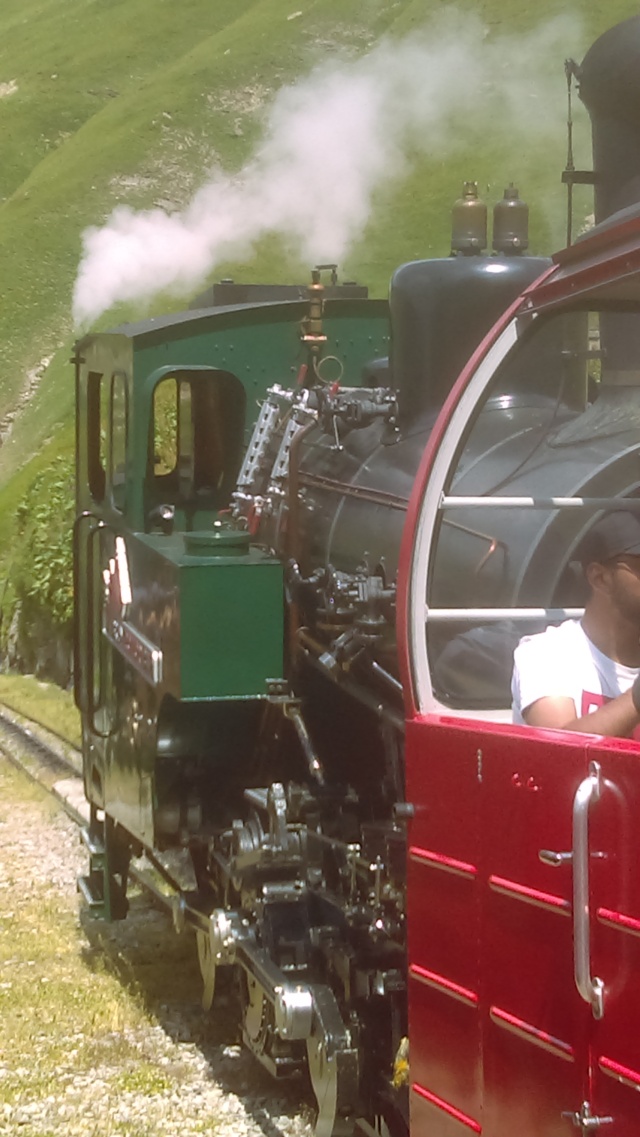 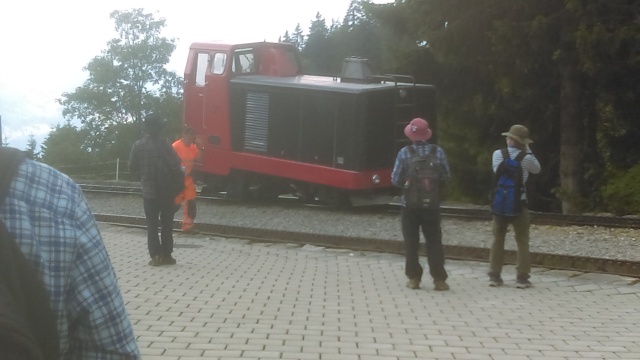 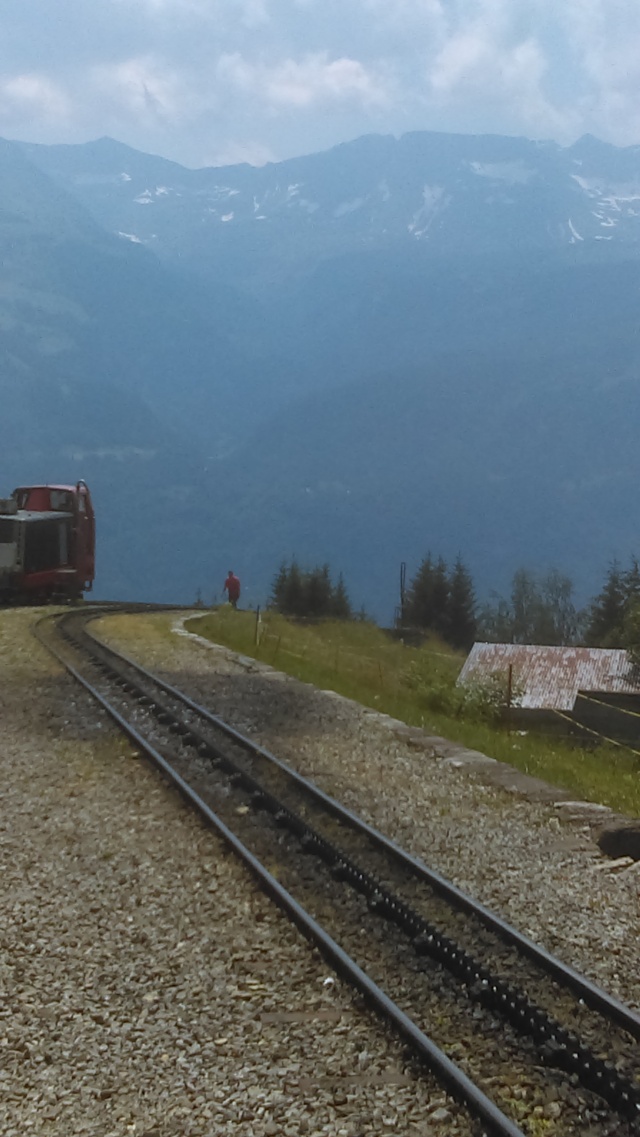 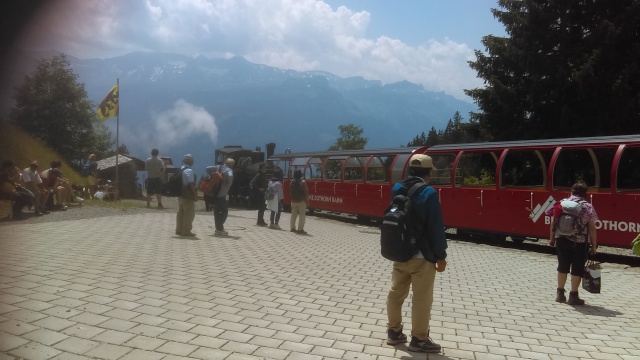 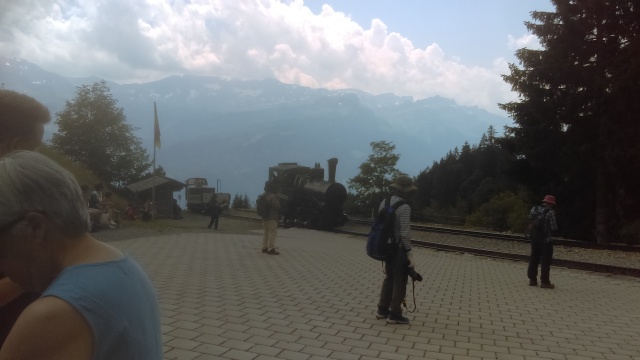