Ron on the road again #3

Woke up this morning to find there had been by UK standards a heavy snowfall overnight, most of which had melted by the time I got back this afternoon.  Decided to head south and caught 0800 to Samedan for connection to Pontresina and the Bernina Line.  I was surprised to find a snowplough truck attached to the front of the unit.  Sitting in first carriage I could see the snow forced out to the side of the train sometimes blocking the view.  I stayed on for the whole journey to Tirano in Italy but the snowplough was taked off at Poschiavo and the blades were white even though we had run out of the snow area and were running under a clear blue sky.  Having spent 40 minutes in Italy, I took the train back to Alp Grum for an hour’s refreshment break (hot chocolate and apple strudel).  I travelled back via St Moritz but the train back to Filisur was like a rush hour commuter train.

View from train at Alp Grum

Back of train from Davos Platz

Slightly blurred, but worthwhile shot of snow plough on train to Tirano at Pontresina

Italian train ready to leave Tirano for Milan.  The weather has looked up!

Rust bucket in sidings at Tirano (Italian side) RhB in background

Italian units in sidings at Tirano 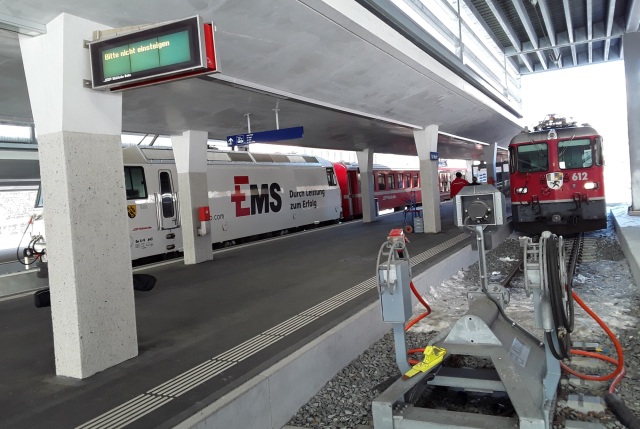