Llanastr – yet another small layout – repost

I realised that, having just written my post on expoEM and Llanastr, I had already blogged this little layout.  As it’s a busy week, I’ll repost this earlier screed.  It’s coming up to holiday season again, so I may well repost a few popular items.  We’ll see…..

The blogsphere is a small place and downright incestuous at times.  Two of my favourite sites Prince Street, and Andrew’s Trains  both recently featured one of my favourite small layouts, Llanastr, built to P4 (4mm/ft, and a scale 18.87mm gauge) standards.  And there’s a link to a whole site describing all aspects of Llanastr.  It seems a little unfair to post about their posts, but here goes…..

The idea of Llanastr was born in the early eigties when I was exiled form my native Wales and found myself in a flat too small to accommodate the layout I had been building based on the Brecon and Merthyr station at Rhymney. In order to ‘keep my hand in ‘ and to allow me to run my stock I decided to build a particularly compact layout that could be erected and dismantled in a short space of time.

In designing the track plan it became apparent to me that much of the length of the typical terminus station is taken up in the run-round loop, so in order to reduce the layout length I decided to place the scenic break in the middle of the station and use the fiddle yard sector plate to complete the run-around and facilitate shunting. One of the prime objects throughout the planning and construction of the layout so far has to avoid the cramped look that can sometimes occur with small layouts (and many larger ones).

The resultant design includes platform and runround capable of handling passenger trails comprising three 6 wheel coaches and a 4 wheel PBV and an 0-6-0 or 2-4-0 tender engine (though the B & M was a tank engine only line after the 1880s) and two sidings; one with access to a bay platform and the other to the goods shed. Both turnouts are B6 and the minimum radius is 4 feet.

The overall dimensions including fiddle yard are six feet long by fifteen inches wide. The main baseboard itself (excluding support frame, lighting, etc.) is split in the middle and hinged to form a unit which measures 3’ x 2’6” which is easily carried in one hand and was designed to fit into the boot of the Vauxhall Chevette saloon I had at the time. 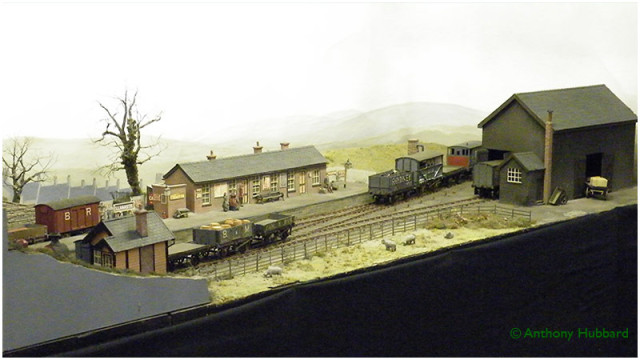 There’s some similarity with the USA micro-layout, I recently described, with limited visible real estate, and a run-round traverser.

1 Response to Llanastr – yet another small layout – repost