Minories #2 – Out in the suburbs – repost

Number 4 is my second Minories post.  Back to normal (whatever that may be) next week!

If you leave London, and head to the other end of the commuter lines, a Minories like design, sort of ‘mini-Minories’ is another option.  Iain Rice published this excellent design, loosely based, I think, on the outer-London terminus at Caterham.

Notable features of this design are the use of slip points to keep the interesting complex trackwork at the throat and the way that this compresses the classic Minories design and means that the platforms stretch for 4’6″ of the 6’6″ design (in OO).  For N gauge, this could fit neatly on a 4′ board, giving a little more elbow room.  Keeping the full length would allow 8-car EMUs in the station.  Another good feature is the prototypically wide platform – we are too inclined to have very narrow platforms on our models.

Again, the design allows for an intense suburban service, and the occasional goods train for the coal siding.  We do, perhaps, lose the parcels traffic, although one could include a daily service, assuming an adjacent depot.

When one looks at some prototype track layouts on the Southern one sees how Rice has captured the suburban character.  Caterham, Bromley North, and Allhallows all look very similar and modelable.  I like the layout of the crossover and single slip at Bromley North, and Allhallows gives an excuse to use the Peco scissors crossover that you bought, and don’t know what to do with!

Bromley North has been captured in an excellent little layout, that you can read about here.  The layout is now defunct, but captured some of Bromley’s character.  It did, however, have a modified track layout, and far more traffic than seen by the real thing.

Of course, if you want a real mini-Minories, some of Ian Futer’s tiny layouts take a lot of beating.  Here we have Victoria Park, an inner city terminus in OO in 4′.  Although it has a single track entrance, this does allow a visual trick to turn it into a double track terminus.  If the kick-back road is extended under the footbridge and into the fiddle yard, one can assume a double track main line, with the other crossover lying out of view.  It also makes the fiddle yard very simple with two points and four roads to the right, as bi-directional running can be carried out on both tracks.

Finally, returning to the city centre, I can recommend the London Reconnection site, that contains excellent articles on London rail past and present, and often very interesting maps and track layouts.  The series on what is now Thameslink, through Holborn and Farringdon is most interesting.  This 1916 map shows the complexity of the lines, mainly underground, in this area – and linking with Moorgate and the original inspiration for Minories.  Perhaps most interesting is the numbers of goods depots tucked below ground behind London streets, belonging to the various pre-grouping railway companies.  These hidden lines could make excellent models, much as the little New York City yards do. 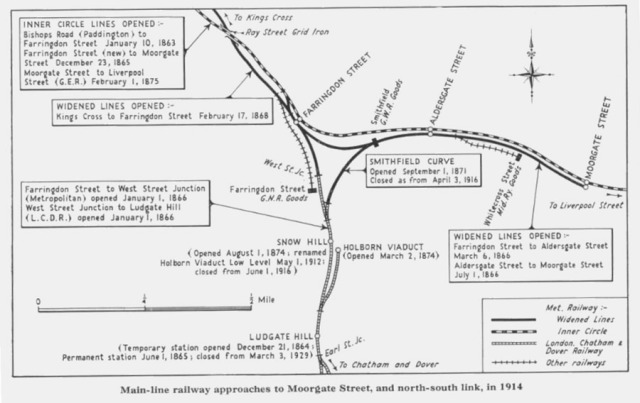 Finally, for the track-builder, how about Smithfield Sidings, just north of Snow Hill and Holborn Viaduct station?  To quote from the site:

As the GN depot plan makes clear, the Smithfield Sidings ran alongside the GN depot but were not connected to it. There were four sidings, and were mainly used by London & South Western Railway (LSWR) stock after working the Richmond to Ludgate Hill services, which ran via Addison Road (now Kensington Olympia). The empty trains descended to the sidings, two of which had a turnplate for reversing locomotives.

If you modelled this, no one would believe the track design.

Later this month, I hope to write a final post, with a couple of new Minories ideas, based on the last couple of posts.  Maybe a Christmas job…..