Posted on June 6, 2020 by snitchthebudgie

An interesting prototype formation, as described by the photographer, Brian Gregory:

The unexpected shot. .1967…At times of heavy traffic at Weymouth, Western Region DMU’s were allowed to haul additional Loco’ hauled stock, subject to strict weight limitations. In this picture we see a Diesel Unit hauling a Bulleid Coach, an unusual combination which expired on the climb out of Weymouth. As happened so many times in the twilight years steam came to the rescue and in this case 4Mt 76007 is pushing the failed combination up the incline whilst hauling its own train at the same time !

Certainly one to confound the pundits on your railway, providing you can provide a suitable gradient.  But I do like the DMU hauling a green Bulleid coach – this could be modelled without the DMU failure.

And another take on ‘Three Bridges’.  From Wikipedia…

Three Bridges, properly known as Windmill Bridge, is a three-level crossing of bridges near Hanwell in west London, United Kingdom. Designed by Isambard Kingdom Brunel, the bridges are a clever arrangement allowing the routes of the Grand Junction Canal, Great Western and Brentford Railway, and Windmill Lane to cross each other: road above canal above railway. Work began in 1856, and was completed in 1859. The project was Brunel’s last before he died on 15 September 1859, just two months after its completion.

This staged Lyon’s Tea picture shows tea transported by road, rail and water.  More interesting than the cliché ‘bus on a bridge’ cameo, and just the sort of thing that us modellers like to squeeze onto our layout.

And as it is today…. 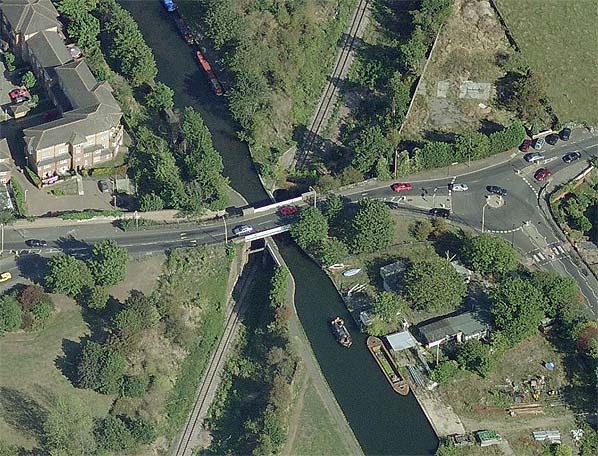 And who will make this first?