Posted on March 4, 2021 by snitchthebudgie

The usual suspects – except Allan who was getting up for a 4am start at work.  And he’d been vaccinated in the afternoon.  The initial group of seven were soon logged in…. 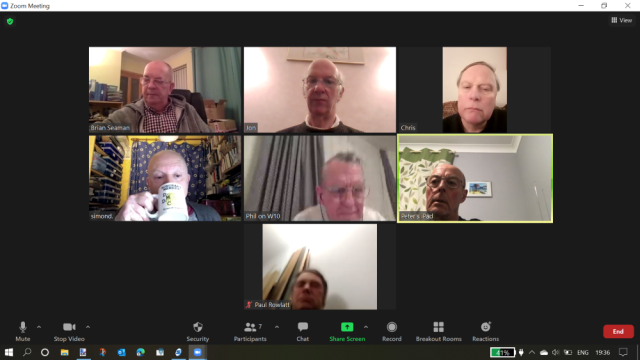 To be joined by a little ‘g’ – that was Graham.  And we also saw trains from Phil and Paul again.  Paul claims to have 34 baseboards now.  Wish I could work that quick!

And the conversation was the usual wide ranging one – from viruses to 3D printing to golf to trains to the weather.  Great to keep in touch, but I hope we’ll be meeting in person before long.

Brian put this lovely loco on screen at one stage.  Another purchase?

And Paul commented after…..

The first ESNG Zoom meeting of the month. Very enjoyable, discussions on various railway topics and not too much on current affairs and news for a change. I had trains running, a ‘test it out and keep your fingers crossed session’ on my revamped layout. It basically worked OK, I had 10 trains running simultaneously, but there were one or two gremlins. It will be much better once I have built a proper control panel which will be my project for next weekend.

Having exchanged emails with Stefan about Stuttgart 2021, he sent me this picture of winter fun in the garden.  In this scale, working snow ploughs could even be possible!

And for anyone building a new layout, here are a few suitable names.  There are, of course, many other strange (and often rude if you have that sort of mind) examples.  Indeed, why name your station ‘Curry Mallet’ when ‘Queen Camel’ is just down the road?  For Redhill locals, ‘Donkey Town’ is next to Bisley, between Lightwater and Woking.