Amongst all my other projects ongoing, I have two N-club boards that need some railway on them.  So how about squeezing a quart into a pint pot?  Stewarts Lane lay just south of the River Thames in Battersea and was founded by the London Chatham and Dover Railway in 1862, to serve London Victoria railway station.  It was sited in the midst of a maze of railway lines.  The main LSWR main lines to Waterloo pass just to the north-west and the yard complex is crossed by various inner-city link lines, as well as some of the main lines to Victoria.  The massive LSWR Nine Elms shed is not far away to the east.  I never saw (as far as I can remember) steam at Stewarts Lane, but on a visit to London into Victoria there was always a chance of spotting one of Bulleid’s Co-Co electric locos, numbered 20001 to 20003.

This is what the area looked like in 1950 or so (taken from National Library of Scotland mapping.)  Not much chance of modelling this, even in N scale (though RMweb has in the past reported on a very nice P4 layout of the electric shed here.)

But tucked away at the western edge of this very large engine shed and yard is this relatively small area.  There’s a 60′ (scaling off the map) turntable that served the whole complex, and an odd little shed attached.  The sidings adjacent probably were mainly used for coal stacks.  Running above on arches, the line above is the old LCDR Ludgate Hill branch, forming a natural backdrop and scenic break to the area.  Just to the east of this line is the LBSCR South London line, that you can see in the first map crossing both the engine yard and the main Waterloo line on a high viaduct. 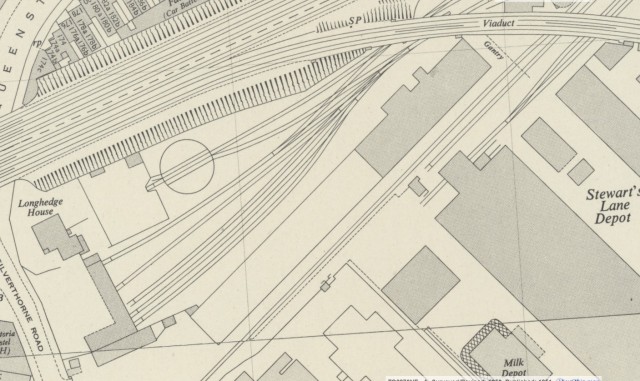 In 1900, it was a lot simpler, but a less interesting track layout.

Although both of these yards could be modelled to scale, a little redesign to keep the character, but store locomotives rather than coal could give an interesting little layout.

And just to the north there’s the old Battersea loco shed.  It lies under one of the lines into Victoria.  Battersea Wharf and the Thames are just off the map to the north.  The water works became Battersea Power Station.  And you’ll note the famous Battersea Dogs Home bottom right – already there in 1900, and probably one of the few bits of this scene still in place (apart from Battersea Park, and the main rail lines.)  Stewarts Lane took over from Battersea in 1934, but I remember the buildings still in place in the 1960’s.  Maps from that era show the left hand roundhouse as a vehicle maintenance shed, and the right hand one as a roundhouse.

Both loco sheds were totally enclosed, including a small – perhaps 50′ – turntable, so they wouldn’t make a good model.  But this area is another interesting bit of railway history.

And this is the sort of scene one might be aiming for – a Schools 4-4-0 somewhere in the Stewarts Lane complex.  Perhaps I’ll sketch this up at some point as a future project.  But for now, it had better be back to Minories!