Posted on October 30, 2022 by snitchthebudgie

These photos are just crying out to be modelled!

The Express Dairy depot as South Morden was perhaps the largest and most modern in the country, but was short lived. Built after WW2, the site is now covered by an even larger mosque.  South Morden station itself is a simple island platform in the best Southern Railway style, but adds some interest to the scene. 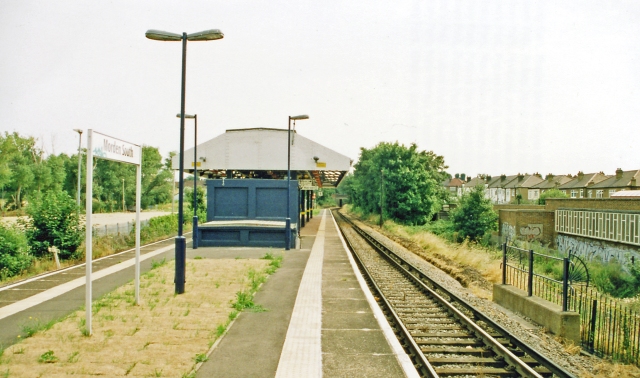 The track layout here is simple, but interesting as shown in the map below (all maps taken from, and copyright of, the Ordnance Survey map sheets.)

I wondered how this could be adapted into an N-club modular layout.  In N gauge, this section of track is about 3.6m long, and could be modelled on 3 x 1200mm boards.  The island platform of South Morden station almost exactly fits on a 1200mm board, and other sections could be added either side of it.

However, as I get older, larger baseboards get harder to move.  And even with help, they are tricky to move down from my loft railway room.  So I wondered how the plan would work on 3 x 900mm boards.  This was drawn simply enough by compressing the map by 75% in the long direction.  Here’s the resulting plan, with baseboards (the standard N-club 400mm wide) added on in outline.

This works very well, with the station platform 900mm long.  However, I made two further changes.  I have an 800mm N-club board in stock in the loft, so I compressed the right hand board slightly.  And I squared up the two left hand boards, for easier construction.  The end result is as below.

This has come out very well, and I think it captures the prototype despite the shortened boards.  The depot trackwork is also very close to Peco code 55 geometry, too.  There are three other changes needed from the prototype:

Not too many compromises, really, and the plan captures the character of the original.  I really like this! Can I find time to build it? (Together with all the other unfinished projects!)

The short film, “Watch the Daily Round” shows the cow to front door process, and has some great snippets taken at Morden, but no pictures of the ESNG Cha(i)rman.

And I do wonder whether this train ended up there….