Posted on January 24, 2023 by snitchthebudgie

Last Saturday, I paid a visit to the Canterbury show with Messrs. Dawes and Atfield.  Visiting shows like this is also good for the drive there through the countryside.  Saturday was no exception, and a cold, sunny morning was best viewed from inside the show.

There was a good selection of layouts on view, included a selection of N gauge and plenty of small layouts – probably a result of covid!  There was also a minor crisis when we adjourned for a bacon roll – the caterers had run out of the stuff!  When will school and outside caterers learn that at the average show the exhibitors can eat their way through the usual bacon supplies, even before the doors open?

Great Endon in OO, set in Lancashire, is in some ways a routine continuous layout, but it had some interesting cameos, including this PW depot.  Mr Dawes commented that he’d love to see the track machines made in N.

The Lemanis Light Railway in OO9 is an excellent first narrow gauge layouts.  We saw it at the Bredgar show, and I commented then that it was a ‘real’ narrow gauge railway with no hint of ‘twee’.

I’m a great fan of micro layouts, and there were a few on show.  Hoppers End in OO had (predictably) hops as main load for the goods yard.  This little layout was set apart by the home designed and 3D printed buildings.

The ‘Docklands LIKE Railway’ in OO does what it says on the can.  A fun little operating diorama.

So to Graham Bridge’s ‘Southwark Bridge’ in N.  Graham has continued to develop this lovely layout through the pandemic – to the extent that it now has real EPB’s on show.  Mind you, Dr Who is yet to escape from the area.  We’ve booked this layout for the September ESNG show, and I’m looking forward to spending more time with it. 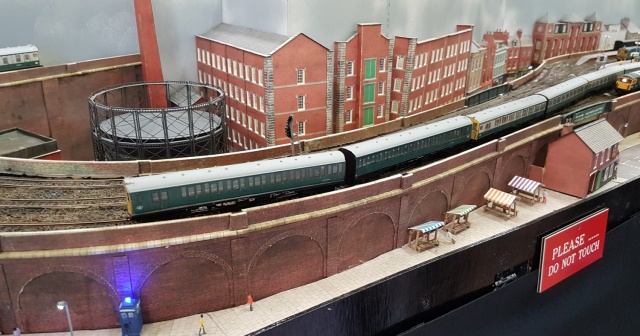 Tanners Hill in N is very compact but again captures the feel of the suburban lines out of the south London termini.  It models the Network South East era, rather than Southwark Bridge’s BR blue.

Prize for the most unusual layout, and some lovely modelling on ‘Ulvaryd’ (hope I pronounced that right!)  Modelling a southern Swedish 2′ gauge in HOe, some of the stock does look familiar as the line opened with imported locos and rolling stock – available in HOe.  I really liked the harbour, and the way the layout has been split diagonally to include a fiddle yard.

Freshwater in 2mm fine scale is a perennial favourite of mine, and it has been great fun watching the model develop with more and more scenic detail, plus more and more accurate rolling stock for the Isle of Wight.  Every time I see it, I want to build something off the Island in 2mm!

Sybil Road in OO is a working diorama with some good scenic work.

Medway Quay in O showed the detail possible in the senior scale.  But as Mr Atfield sagely commented, it’s no use having a glowing firebox in your Terrier, when there’s no crew… 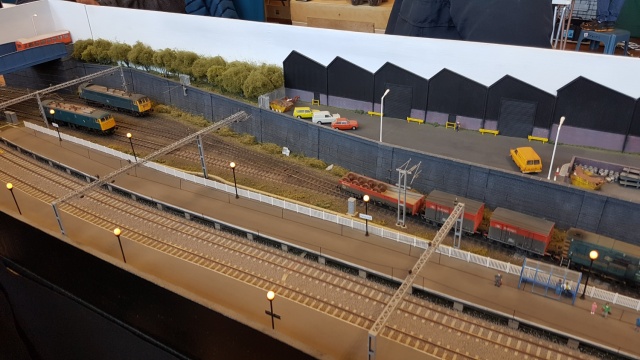 Holt Street in N is the Canterbury club layout.  Very much a work in progress (and from the exhibition guide the design has changed from time to time.)  But there’s a lot of promise here, and the loco shed area shows what they will achieve.

Finally, Wellbridge in OO.  Again, a fairly standard continuous run, but a chance to entertain with a string of trains passing by.  I guess that’s what we do with the ESNG modular layouts, anyway…..

We also ran into a few old friends, and made some minor purchases.

Overall, a good exhibition, and a pleasant morning out (except for the bacon.)