Posted on May 3, 2015 by snitchthebudgie

Cha(i)rman Allan semt me this shot taken by Sean on 18 March from the cab of his train.  These ‘Hasting’ DEMUs are another favourite from my early train spotting days, as they also ran on the line between Petts Wood and Orpington.  Unlike most BR DMUs, the engine is above floor level, and can just be seen in what looks like a long lugguage compartment.  They had a very distinctive sound, and could be heard a from long way off when at full throttle.  Hence all the Southern Region DEMUs were nicknamed ‘Thumpers’ due to this noise (and probably due to what they did to the track.) The unit shown below is the preserved Hatings unit and was part of the class of 23 units built in 1957-1958 at Eastleigh and Ashford.  The first 7 units were shorter than usual, being 57 ft long, but the remaining units were the standard 63 ft 6 inches in length. All these units were built with a narrow body profile to accommodate the restricted tunnels on the London-Hastings line, and were almost entirely resticted to this service.  These tunnels were some of oldest in the region, hence the restricted loading gauge.  The DEMUs replaced the Southern Schools class 4-4-0’s, and old Maunsell flat sided coaches that also had been built to suit the loading gauge.  A real case of ‘beauty and the beast’, but I do rather like the beast…. 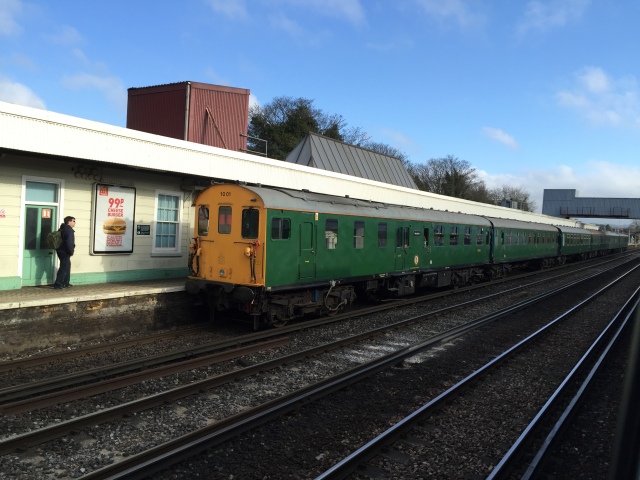 For those wanting to model one, note that they are not a simple hack of some N gauge BR Mk 1 coaches – the flat sides and no tumblehome make them easier to scratchbuild with etched brass sides than to convert them from other models.  However, the underframes and other details are pretty standard.

Secretary of the East Surrey N Gauge railway club
View all posts by snitchthebudgie →
This entry was posted in ESNG, Inspiration, Out and about, Prototype and tagged ESNG, prototype, railway, Southern Electric. Bookmark the permalink.