In case you missed the news….

Posted on September 8, 2015 by snitchthebudgie

The newspapers seem to be full of news of the possible discovery of a train load of Nazi gold.  A death bed confession may have confirmed the rumour that a train of looted gold was hidden in an extensive tunnel system in Poland.  Matt of the Daily Telegraph puts it all into context…. 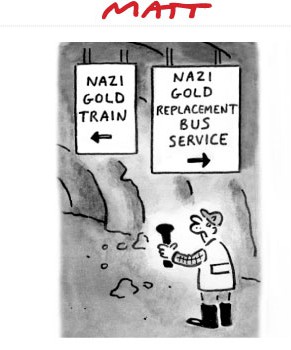 Of course, it was supposed to be Mussolini who was the only Italian leader since Roman times to get the trains to run on time.

Secretary of the East Surrey N Gauge railway club
View all posts by snitchthebudgie →
This entry was posted in Inspiration, Out and about, Prototype, Weird and wonderful and tagged Berlin, inspiration, railway. Bookmark the permalink.