Posted on February 26, 2016 by snitchthebudgie

Regular readers will know that I am better at planning railroads than building them, and probably prefer the armchair to the workshop.  So I was pleased to receive this year’s copy of ‘Model Railroad Planning’, published by Kalmbach, from the ever reliable SPV. 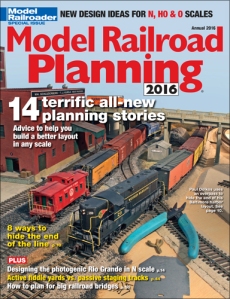 What is in this year’s edition?  Despite the usual plans requiring an aircraft hanger, half the NEC, or an American basement, this edition contained a good number of interesting articles.

I always like to see summaries of good practice.  It’s much the same at work – I never mind attending a course that puts a lot of technical knowledge together in one place, and provides a refresher on a topic.

The article, ‘8 ways to hide the end of the line’ does just that, reminding us how to hide tracks as they leave a scenic area, or maybe just to separate scenes on the railroad.  The usual bridges, tunnels and mirrors feature, but the buildings, trees and bends gave some food for thought.

Next the Rio Grande on a grand scale in N.  A basement mainly full of spectacular scenery, that’s good to look at, but not that inspiring as I will never be able to build anything like it.

‘Elevating the right-of-way’ was an interesting reminder as to how USA railroads took to embankments and viaducts to get through congested urban areas, just like our UK lines.  An interesting track plan – 16′ modules in HO would compress nicely into ‘N’.

‘Georgia short line on my mind.’  I’ll forgive the title, as this little 11′ or so square layout in HO translates nicely into ‘N’.  Simple track layouts give more food for thought.

Perhaps the most interesting article is ‘Adapting to a larger scale.’  Here Jeff Kraker discusses the challenges of moving from HO to On30 or O scales.  There are some valid thoughts about designing in large scales – in ‘N’ we don’t have to worry that buildings in the foreground are too tall to reach over for access to the trains.  We have the opposite problem that the buildings are too low to make an effective view block, or break up our view of things and make the layout look larger.

And then this fascinating idea:

It was that moment that I conceived a new theory about switching speeds versus modelling scale: Model railroaders don’t operate their layouts at a speed that’s relative to scale.  Instead we tend to operate the locomotives at the same speed regardless of scale.

He carried out some trials with friends in N, HO and O and came to the conclusion that:

Most model railroaders DO operate a locomotive at the same actual speed regardless of the scale.

I suspect that there is strong evidence of this most club nights at ESNG….

Finally a mention of ‘Extending an English branch.’  The Model Railroader does occasionally feature USA based models of UK prototypes.  And I have to say that often they are not that good compared with what we see month by month in the UK press.  But this article is by John Flann.  I recall reading John’s articles in Railway Modeller in my relative youth.  On retirement, he emigrated to the States to be with family, and it’s good to see him still building realistic and attractive layouts at the age of 86.  And the prototype is still a GWR branch line, just as it was in the 1970’s!

I haven’t mentioned a few articles, but the whole magazine is a good read this year.  Recommended!