Well, another year done and dusted!  This year’s show seems to have gone off well enough.  We’ve had more visitors than last year, put a few pennies in the club coffers, and received plenty of positive feedback about the show (and indeed the catering.)  A lot of hard work was involved, but it was worth it for a day playing trains and entertaining the Great British Public.

However, Friday morning, it looked as if we might not even have a show.  The contractor on site extending the school, who had progressively reduced the size of the car park through the year, had an open trench for the new gas main across the school drive, and a large pile of rubble and soil blocking access to the front door.

Fortunately, they did as they had promised, and by the afternoon, the trench was filled and partially plated, and the piles of materials had disappeared.  When I arrived mid-afternoon it looked like this at the front entrance…..

With only a few piles of soil left around.

Set up was going well early Friday evening, and we were able to pause for fish and chips from the local chippy.  (Never before have I seen ‘large haddock’ served as a large piece of fish and an small piece to go with it – a veritable shoal of haddock – no wonder we’ve overfished the North Sea.  I was glad to have had a pie.)  By 8:30pm, trains were running on our modular layout, and we packed up earlier than usual.

Saturday morning started quite wet (with mud running down the school drive from the site), but amazingly, the Met Office got it right and the rain stopped at 9:00am and the sun even came out.  Mr Apps was doing an excellent job parking more cars than seemed possible into a very small area.

And inside, the first visitors were queueing at the pay desk.

The main hall was soon buzzing with a good surge of early visitors.  We always seem to get a lot of people in for the first hour or two, then less through the rest of the day.

The ESNG award for bravery this year was awarded to Sean, who arrived on Saturday morning looking slightly worse than death warmed up after a nights toilet hugging with Mr Montezuma.  Thanks, Sean, as it would have been easy to give up at that point.  Luckily, Mark and Kieron came along to help run Leonard.  This did result in a few non-Network Southeast anomalies, like the OLD Southern Railway goods train….. 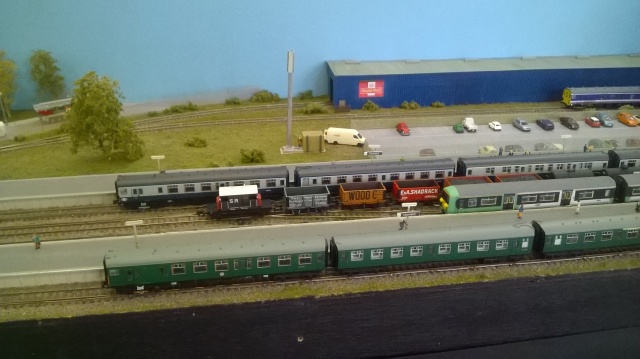 And a German railbus by the signal box. 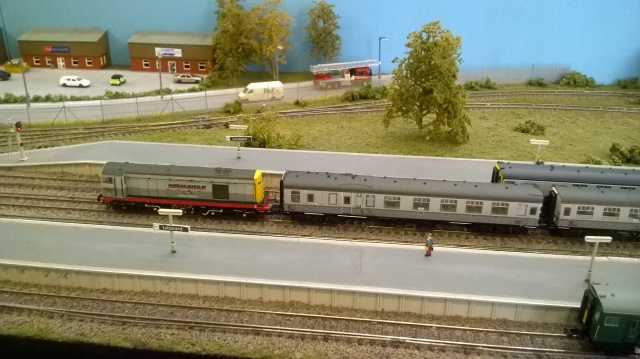 Next post we’ll have a look at the ESNG modular layout.