London to Brighton train line opened 175 years ago this week

From the Surrey Mirror, written by John Capon, who knows all there is to know about Redhill and its railways.  Read more there….

A new era for local travellers dawned exactly 175 years ago next Tuesday. For on that day – July 12, 1841 – the first passenger-carrying trains started running on the partially completed London to Brighton railway line, writes John Capon.

Just how many passengers were waiting for the first trains to arrive that morning at the station with the rather over-long – but strictly accurate – name, “Red-Hill and Reigate-Road”, is not known. And how many of them, one wonders, were aware how fortunate they were to have a station there at all?

And were they more reliable than Redhill in 2016?  Perhaps open to question!  The original station was close to our house, and lasted all of two years, before being relocated in Redhill itself.  It was a handsome building and would make a good model. 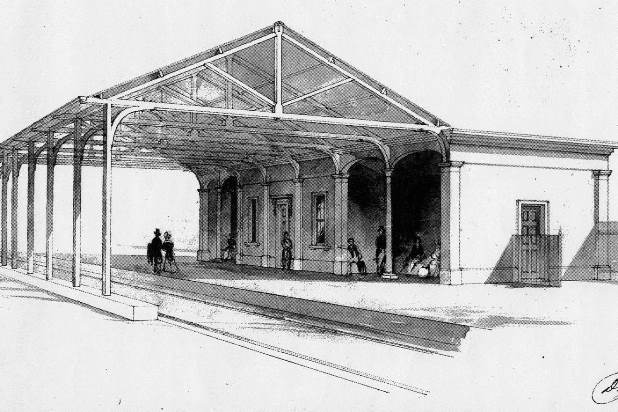 What did it look like? The locomotive was not much more than a steam boiler on wheels, with little if any protection for the driver. The coaches were all four-wheelers, first and second class ones looking a bit like three stage coaches welded together.

Train guards sat uncomfortably on top of the coaches. The fare to London Bridge (Victoria station was not opened until 1860) was 5s 0d (25p) first class and 3s 6d (17½p) second class, which today would be the equivalent of £18 and £12.70, and the train was due to arrive in the capital at 11am, a journey time of one hour and five minutes.

The fares to Brighton were twice what they were to London.There were three more trains daily in both directions, and such was the popularity of the line that at the end of the first week 2,483 passengers had travelled on it, which was surprising, considering that there were still many concerns about safety and security on this new-fangled invention…..

Passengers wanting to travel to Brighton would have had to wait another half hour before the first train out of London Bridge arrived at 10.36am. Because the line had only been completed to Haywards Heath, passengers had to leave the train there and transfer to a horse-drawn coach to take them on to their destination, arriving at 1.30pm.