Posted on January 17, 2017 by snitchthebudgie

A mixed bag today, with two things that caught my eye, and two whimsical railway thoughts….

I had an overdose of model railway shows this weekend, and came away encouraged to get down and do some more modelling.  However, the two shows encouraged me for different reasons.

The first one was really quite an average show, with a few things to inspire.  So I came away both encouraged and relieved that I could also build models that good….

The second was one of the best shows that I have been to for some time.  There were 4 or 5 (depending on ones perspective and interests) that were just incredibly good.  I came away encouraged again, but this time to get modelling and raise my game…..

What inspires you to get building?

This picture, unfortunately not in my house, does however sum up my problem!

And whilst I try and avoid politics on this blog, I was very amused by this little article, to welcome the 45th President of the United States of America…..

It seems that the company that is the Washington area’s top provider of portable toilet rentals and long-time provider for important D.C. events ran into the possibility of a little stink this year.

The company’s name is Don’s Johns.

This was evidently unacceptable to Inaugural organizers, so the name has been taped over. Wouldn’t want to offend a certain prominent individual at the Inauguration, apparently. Only those toilets that might come into camera range for TV were covered up. Robert Weghorst, the company’s CEO, said he didn’t know of the matter until the AP reported on it.

And for a modelling idea, how about Southern Railways on strike?  If you collect models, but don’t like operating them, here’s the perfect minimum space prototype.  You don’t even need a mechanism in the models, but can display all of them….. 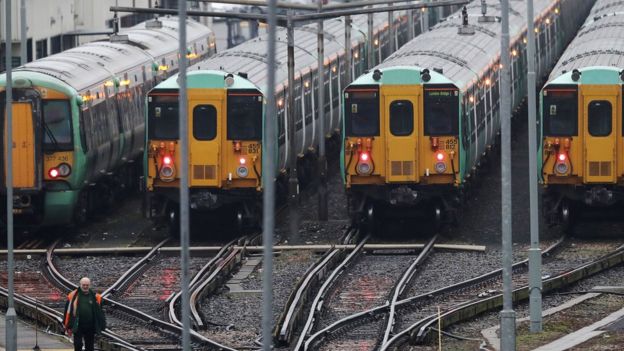 Secretary of the East Surrey N Gauge railway club
View all posts by snitchthebudgie →
This entry was posted in ESNG, Weird and wonderful and tagged book review, humour, inspiration. Bookmark the permalink.