Why Rome sends trains filled with rubbish to Austria

Posted on May 6, 2017 by snitchthebudgie

This could be another odd modelling article, but it caught my eye as I was catching up with the world news.

Rome’s rubbish is helping to power Austrian homes – and it gets to Austria by train.

Rome has been struggling to cope with a rubbish crisis and Austria has spare capacity at a waste-to-energy plant near Vienna.

So a deal has been struck. The Italians are paying Austrian company EVN to dispose of up to 70,000 tonnes of Roman household refuse this year.

The waste is transported by train through northern Italy, over the Alps and ends up at the EVN thermal waste utilisation plant at Zwentendorf on the Danube. 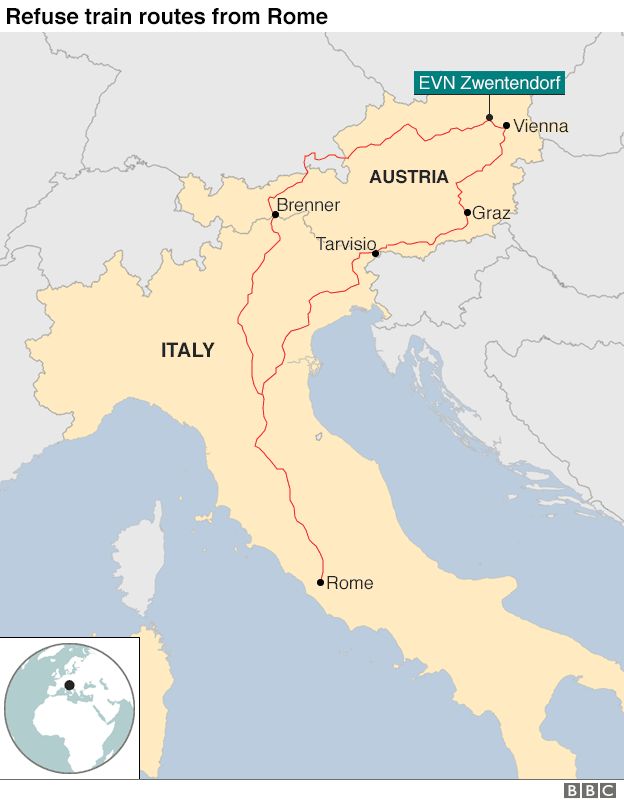 Up to three trains a week arrive at the Zwentendorf plant. Each carries airtight containers loaded with around 700 tonnes of Roman household waste.

The refuse is incinerated and converted into hot flue gas, which generates steam. The steam is delivered to a neighbouring power station, where it is converted into electricity, which is used to power 170,000 houses in the province of Lower Austria.

“It is not crazy,” insists Gernot Alfons, head of the EVN thermal waste plant. For him it is an environmentally friendly solution and the rubbish trains are key.

“The other alternative would be to put this rubbish into landfill, which creates a lot of methane emissions that create a lot of impact in terms of CO2 emissions.

“It is much better to transport this waste to a plant which has a high energy efficiency like ours.”

Another little modelling challenge and a ‘prototype for everything’ moment.  Read the whole article in http://www.bbc.com/news/world-europe-39641761