Well, the ESNG AGM went off very well.  11 hardy souls tolerated an evening without running trains, and we had some excellent discussion as to how to take things forward.  Unfortunately the Cha(I)rman was missing, due to the yet another milk round starting in the early hours.

Of course, there were no takers to stand for the committee, so the same old team are carrying on.  But thank you to Dave, who agreed to look after our bookings for external exhibitions.  And there was an embarrassing proposal to carry forward last year’s action points as so few had been actioned.  Thank you Simon – but it was a good idea.

Sunday came, and we had a pleasant afternoon running trains.  Only six members turned up, but that gave a relaxed feel to the time, and we could run as many (or as few) trains as we wanted.  It was another lovely day outside, and we made the most of it by opening all the hall doors and windows to let the breeze through the hall.

We soon had a good size circuit set up…. 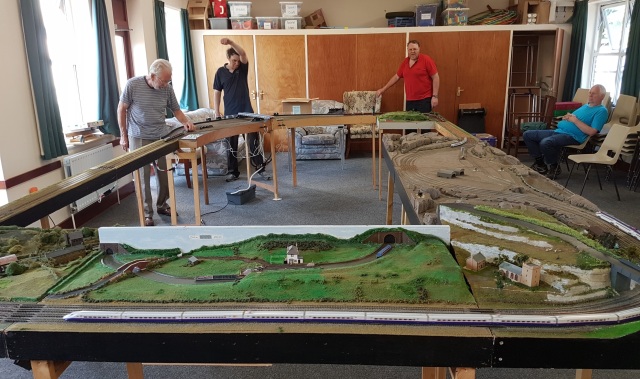 Paul had the usual variety of Japanese bullet trains…. 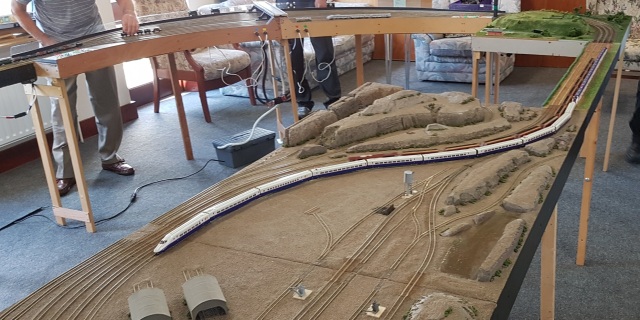 I also had a Japanese day, with a tram and multiple unit….

Whilst Derek’s goods train bumbled along for much of the afternoon, occasionally shedding a wagon or two…

But unfortunately no curry.  I was a bit under the weather, and Allan had another 2am milk round!