It’s repost week this week!  Another repost from 2013.  I’d love a holiday back in Georgia – such an interesting country with some wonderful scenery.  One day??

Spring cleaning my work files on the computer, I came across these shots in 2007 of Borjormi, Georgia (the ex-Russian one, not the US state).  I was meant to be looking at the small river that passes under the station. 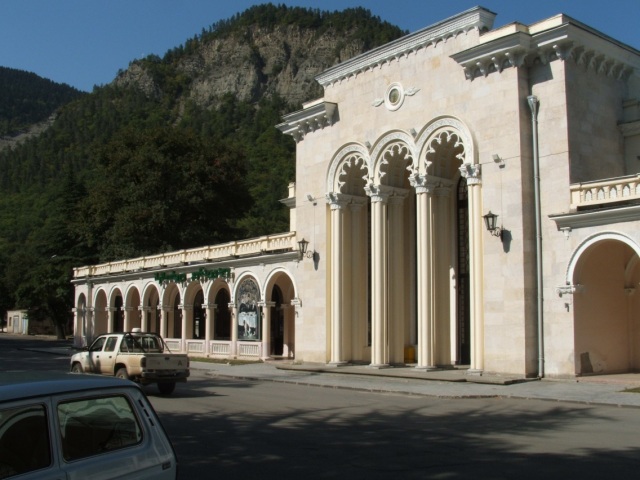 The ornate station is a little out of place in this alpine region of Georgia, but it was built as Stalin’s personal station – his summer palace is a couple of kilometres away and now open to the public.  Up in the hills above Borjormi are a number of ski resorts.  Down the road from this station (and less accessible) is an interchange with a metre gauge overhead electric line that winds its way up into the mountains.

The multiple units on this line had been recently upgraded to encourage tourism, but they look pretty Russian to me…

I’ve added a couple of shots of Tbilisi….

And a couple of the narrow gauge line at its abandoned terminus up in the hills….

Secretary of the East Surrey N Gauge railway club
View all posts by snitchthebudgie →
This entry was posted in Out and about, Prototype and tagged Georgia, Georgian Railways, railway. Bookmark the permalink.